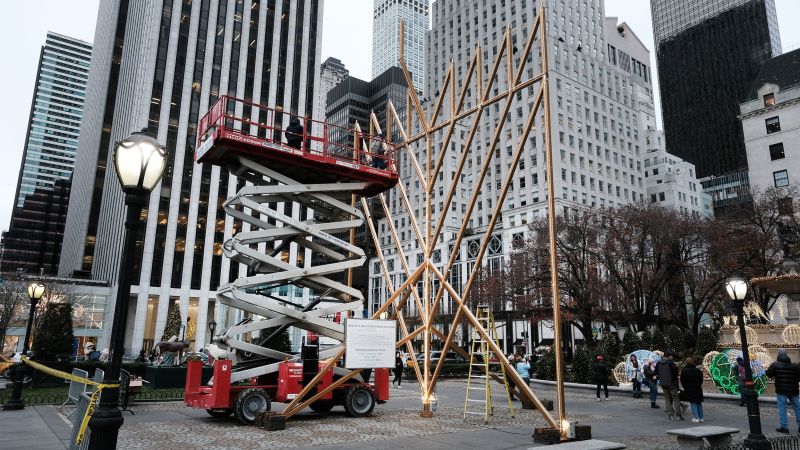 The Big Apple is getting just a little bit brighter tonight.

The world’s largest menorah will be lit on Sunday night in Manhattan to mark the start of Hanukkah, the Jewish festival of lights.

The 36-foot tall menorah was erected in Manhattan’s Grand Army Plaza, near midtown, on Thursday.

Israeli artist Yaacov Agam designed the structure, according to CNN affiliate WABC-TV. The Lubavitch Youth Organization will lead a public menorah-lighting ceremony, featuring live music and dancing, at around 5:30 p.m., according to WABC-TV. And another candle will be lit each night until December 26.

Hanukkah, which means “dedication” in Hebrew, usually falls between late November and early December each year. Jewish families around the world light a candle in a menorah every night for eight nights to commemorate the victory of the Maccabees over the Syrians and the re-dedication of the Second Temple of Jerusalem around 165 BC.

When the Maccabees reclaimed the temple, they found that they only had enough oil to light the menorah for one night. But the oil lasted for eight full nights – a miracle that Hanukkah celebrants reenact by lighting the eight candles in a menorah, or hanukkiyah.

Brooklynites will also have the opportunity to witness the lighting of a larger-than-life menorah. Brooklyn’s largest menorah will be lit on Sunday night at around 4 p.m. at Grand Army Plaza near Prospect Park, according to the New York City Department of Parks and Recreation. The ceremony will feature live music, hot latkes and gifts for children, according to the department.