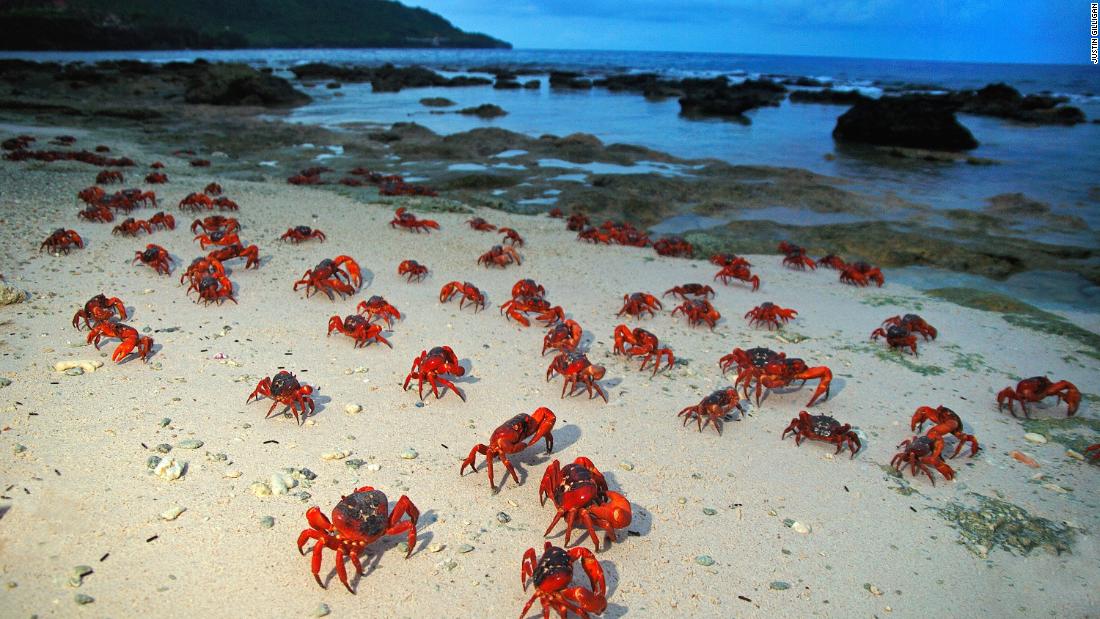 Editor’s Note — Monthly Ticket is a CNN Travel series that spotlights some of the most fascinating topics in the travel world. In December, we’re getting into the holiday spirit and celebrating the festive season.

(CNN) — “The jungle is our playground, and the sea is our wonderland.”

That’s how Sook Yee Lai remembers her childhood on Christmas Island, an overseas territory of Australia that’s about a 3.5-hour flight northwest of Perth, the capital of Western Australia.

“We do lots of free diving, snorkeling, diving, surfing, caving and walking through the jungle to hang out on hidden beaches,” Lai tells CNN Travel.

A remote gem in the Indian Ocean that’s closer to Indonesia than the Australia mainland, Christmas Island’s natural beauty has led many to refer to it as the “Galapagos of Australia.”

“It is a very special island,” she says. “We have a vibrant, beautiful and harmonious community in such a small, isolated place.”

A melting pot of cultures

Lai moved to Perth in 1997 when she was 15 to finish her high school education then study at university.

Although she now lives there permanently, Lai returns to Christmas Island frequently for work and to visit family and childhood friends.

“Every time I go back, the smell of the jungle hits me as we get off the plane. That’s the smell of home for me,” says Lai, who is also the secretary of Christmas Island Stories, an association chronicling the island’s multicultural people and heritage.
About 22% of the roughly 1,700 residents on the island have Chinese ancestry, 17% Australian, 16.1% Malay, 12.5% English and 3.8% Indonesian, according to the 2021 census.

As a result, day to day it’s common to hear many languages — English, Mandarin, Malay, Cantonese, Min Nan Chinese and Tagalog (from the Philippines), to name a few.

“We’re encouraged to speak our languages as children and share it with others,” adds Lai, who speaks four languages (English, Cantonese, Mandarin and Bahasa Melayu from Malaysia).

The diversity on Christmas Island, which became part of Australia in 1958, is directly linked to colonial-era mining and World War II.

The British East India Company first spotted the island on Christmas Day in 1643, and the holiday became its namesake.

After discovering valuable phosphate deposits, the British annexed the territory in 1888.

In 1942, during World War II, Japanese troops occupied Christmas Island. In 1943, half the population was sent to prison camps in Indonesia, according to the Australian Government.

After the war, islanders returned from Indonesia with spouses and children, which further enhanced the island’s multicultural makeup.

Today, about 1,300 people, or 80% of the population, live in Flying Fish Cove, the capital city and main port town where much of the action happens.

“The Cove is the heart of the community on Christmas Island. People launch boats or swim off to see all the beautiful coral and marine life — you don’t have to go very far to see dolphins, turtles or octopuses,” Lai says.

For Lauren Taylor, 37, it was love at first sight when she arrived.

The part-time school administrator moved from Dunsborough, in Western Australia, with her husband to work at the only school on the island, Christmas Island District High School.

“My first impression was that I could live here for the next 10 years,” Taylor tells CNN Travel.

At the time, she was three months pregnant with her first child. Her family has grown to include two children, 8 and 9, who have grown up without technology and surrounded by nature.

“There is no internet apart from when you have Wi-Fi at home,” explains Taylor. “Our kids climb trees and play outside.”

Few people lock their houses, and some don’t even take the keys out of their cars, adds Lai. “It’s just very free and safe.”

Nature at your doorstep

About 64% of the island remains protected national parkland — and a vital home to many species, from enormous coconut (or robber) crabs to emerald-hued Christmas imperial pigeons, elegant golden bosun birds and the red-breasted Christmas Island frigatebird.

“There are so many amazing wildlife encounters,” says Taylor. “We were out on the boat and saw a turtle, jumped in the water to swim with it, and as we did, a whale shark came up behind us. It was frightening at first, but once the heart calmed down, it was magnificent.”

Of course, the famous red crab migration, which starts when the wet season begins around November, is the island’s biggest tourism attraction.

During this time, an estimated 40 million to 50 million tiny red crabs traverse the island, crawling over roads, cars and blanketing beaches in a sea of red.

It’s a beautiful sight from afar but not always easy to live with.

“It’s like a million little, tiny spiders everywhere. It’s creepy, and I feel itchy thinking about it,” says Lai. “I know there’s a huge fascination with [the natural wonder], but growing up on the island, I remember going to bed with a blanket over my head to make sure nothing could crawl into my ears.”

Residents use rakes to sweep them gently off the roads and have even built crab crossings, which guide the tiny crustaceans up and over roads into the jungle.

“One crab migration, the baby crabs came through our house,” says Taylor. “There were millions of them. They would fall out of the exhaust fan in the roof above the toilet, and we would have to have a bucket on our heads to catch them.”

Tourism on the rise

For some, the island provides potential for new business ventures.

As the mines deplete, the government is shifting its focus to sustainable tourism as a future mainstay.

“We saw a huge influx of tourists during Covid-19 because people in Western Australia could travel within the state freely, but not elsewhere,” says Lai.

“Many people come for nature, birdwatching, diving…There are very few sandy beaches that can be accessed without walking through the jungle, but we have a reef teeming with marine life and warm water all year.”

After spending two years traveling the world competing in free-diving competitions, Australian David Mulheron was looking for a new home in which to live and train permanently.

“My sister and her husband had recently moved to Christmas Island,” says Mulheron, a national record holder who represented Australia in the 2019 free-diving world championships.

“The reef here is some of the best I have ever dived,” he says. “I have been lucky enough to swim with whale sharks, manta rays, turtles and dolphins along with the hundreds of varieties of colorful tropical fish inhabiting the reef.”

While it’s a pleasant place to live most of the time, residents say it has its challenges.

“The biggest downfall is the cost of travel. Residents really struggle to fly to the mainland,” Amanda Clarke tells CNN Travel.

Clarke, who runs Paradise Pizza and Takeaway, and an outdoor cinema snack kiosk, moved to the island in 2019 with her husband, who works as the airport’s operations manager.

In addition to being infrequent and unreliable, with frequent weather-related delays or cancellations, the flights are expensive, costing $1,200 or $1,400 round-trip, Clarke laments.

Shopping for clothes, diapers and food can also be problematic.

“For special occasions like birthdays and Christmas, you need to plan three months ahead to make sure the presents arrive in time. When the children were younger, we always ordered nappies the next size up due to the delay,” says Taylor.

About 80% of Christmas Island’s 1,700 residents live in Flying Fish Cove.

When it comes to fresh food, the island is largely dependent on imports.

“The main way we get food is by ship every six to eight weeks. But when the swell is in, the boat can’t dock,” says Taylor. “There is a fortnightly freighter, but it’s double the cost and then some.”

As a result, the supermarkets run low on produce during the swell season, which runs from December to April.

Vegetables can be prohibitively expensive. For instance, a head of broccoli could cost $20 while lettuce could be $16, says Lai.

But many long-time residents have planted their own vegetable gardens and know where to find fresh fruits and vegetables.

“When my friends say they are going to the ‘supermarket,’ they actually mean the jungle. There are also a lot of wild chickens. You can definitely survive.”

Moreover, the tropical climate produces abundant bananas, mangoes and “the best avocados,” according to Clarke.

Christmas celebrations on the island include the annual Rock Riders Lolly Run.

Given its name, it’s only natural to wonder what Christmas is like on Christmas Island.

By the end of December, weather vacillates between perfect sunny days and heavy rain, and the crab migration is often in full force.

This year, the community decorated the central roundabout near the cove with Christmas lights and reindeer.

Many people travel abroad to see family over the holidays, but those who stay behind enjoy the season’s quiet nature.

“These holidays will be spent on our boat swimming with whale sharks that have come to eat the baby crabs,” says Taylor.

She also looks forward to spending December 25 on the beach with her family and joining the island’s Orphans’ Christmas — a community lunch at Flying Fish Cove.

As a harmonious melting pot of Buddhism, Confucianism, Islam and Christianity, Christmas is just one of many nonsecular holidays celebrated by the whole community.

“Islam is a faith that is very prominent on Christmas Island, and so is Buddhism, so we’ve got temples all over the island,” says Lai. “There’s also a Catholic and Protestant church. Everyone’s free to worship and celebrate.”

Since the island is home to many people of Chinese heritage, Lunar New Year, Moon Festival and Hungry Ghost Festival are important celebrations.

In fact, Christmas Island is the only place in Australia where Lunar New Year is a public holiday.

“I experienced culture shock when I moved to the mainland, because it wasn’t a public holiday,” says Lai.

Clarke says it’s this inclusive, supportive nature that is one of the island’s most valuable assets.

“We all live harmoniously together, celebrating each other’s [cultural] celebrations, whole island weddings and birthdays. If someone has an illness, the whole island comes together to help the families,” says Clarke. “A death is felt by everyone — or even if a family leaves, it feels like one of your own is leaving.”