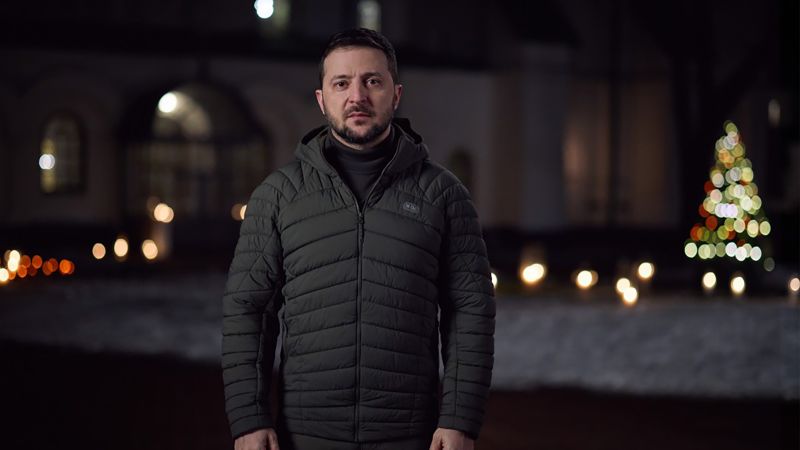 President Volodymyr Zelensky called on Ukrainians to have “patience and faith” in a defiant Christmas address after a deadly wave of Russian strikes pounded the southern city of Kherson.

Ten months into Russia’s war on Ukraine, Zelensky spoke of endurance and pushing through to the end, while acknowledging that “freedom comes at a high price.”

He urged the nation to stand firm in the face of a grim winter of energy blackouts, the absence of loved ones and the ever-present threat of Russian attacks.

Zelensky’s message came after Ukrainian officials said Russia had launched deadly rocket strikes into downtown Kherson on Christmas Eve, killing at least 10 people and injuring dozens. Zelensky described those attacks as “killing for the sake of intimidation and pleasure.”

In his Christmas message, Zelensky acknowledged that all holidays have a bitter aftertaste for the besieged country this year.

“We can feel the traditional Spirit of Christmas differently. Dinner at the family table cannot be so tasty and warm.

“There may be empty chairs around it. And our houses and streets can’t be so bright. And Christmas bells can ring not so loudly and inspiringly. Through air raid sirens, or even worse – gunshots and explosions.”

He said that Ukraine had been resisting evil forces for three hundred days and eight years, however, “in this battle, we have another powerful and effective weapon. The hammer and sword of our spirit and consciousness. The wisdom of God. Courage and bravery. Virtues that incline us to do good and overcome evil.”

Addressing the Ukrainian people directly, he said the country would sing Christmas carols louder than the sound of a power generator and hear the voices and greetings of relatives “in our hearts” even if communication services and the internet are down.

“And even in total darkness – we will find each other – to hug each other tightly. And if there is no heat, we will give a big hug to warm each other.”

Zelensky concluded: “We will celebrate our holidays! As always. We will smile and be happy. As always. The difference is one. We will not wait for a miracle. After all, we create it ourselves.”

Ukraine has traditionally celebrated Christmas on January 7 in line with Orthodox Christian customs, which acknowledge the birth of Jesus according to the Julian calendar.

But a yearslong rift between the Ukrainian and Russian branches of the Orthodox church has widened since Moscow’s invasion in February.

One branch of Ukraine’s Orthodox church announced last month that it would allow its churches to celebrate Christmas on December 25. And many younger Ukrainians are now choosing to observe the holiday on December 25 in a bid to move away from Russia and towards the Western world.

Hours before Zelensky delivered his Christmas address, a series of deadly Russian strikes slammed into the city of Kherson, where apartments and medical facilities were among the buildings hit, according to Yaroslav Yanushevych, head of the region’s military administration.

Yanushevych said Sunday that a total of 16 people had been killed in 71 Russian attacks across the wider Kherson region on Saturday, including three state emergency workers who were killed during demining operations. Another 64 people received injuries of varying severity, he said.

Zelensky condemned the shelling of Kherson as an act of “terror.”

“The terrorist country continues bringing the Russian world in the form of shelling of the civilian population. Kherson. In the morning, on Saturday, on the eve of Christmas, in the central part of the city,” he said.

“These are not military facilities,” he wrote on Telegram Saturday. “This is not a war according to the rules defined. It is terror, it is killing for the sake of intimidation and pleasure.”

In November, Russia’s military retreated from Kherson city, the only regional capital it had captured since the invasion began, in a major setback for Russian President Vladimir Putin. Since then, Russian forces have stationed themselves across the river from Kherson and regularly shell the city from there.