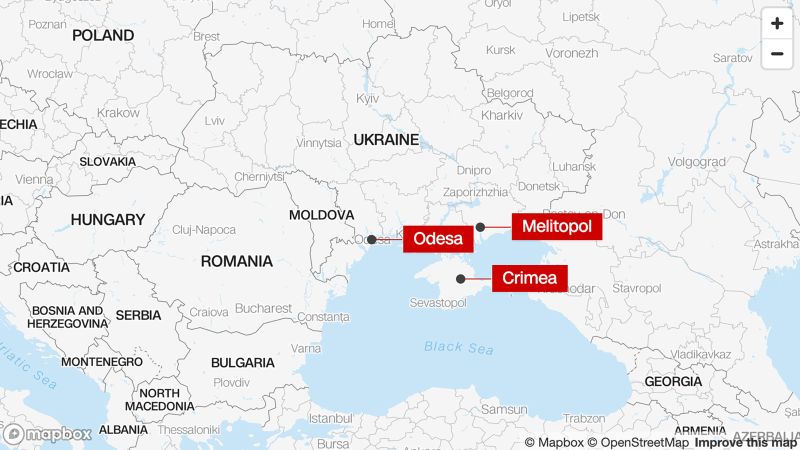 Multiple explosions have been reported in the Russian-occupied city of Melitopol in southern Ukraine, in the self-proclaimed Donetsk People’s Republic and in annexed Crimea – including at a Russian military barracks.

The explosions in Melitopol came amid reports from officials on both sides that Ukraine had launched a missile attack on the city on Saturday, while Russian state media said 20 missiles hit the Donetsk People’s Republic on Sunday morning.

Separately, reports also emerged of multiple explosions in Russian-annexed Crimea, including at a military barracks in Sovietske.

However, Ukrainian officials have not commented on the explosions in Crimea or in the Donetsk People’s Republic and CNN is unable to verify the cause of the blasts or the extent of the damage.

Melitopol, in Ukraine’s Zaporizhzhia Oblast, has been under Russian occupation since early March.

Yevgeny Balitsky, Russia’s acting governor of Zaporizhzhia, said the missile attack on Melitopol had “completely destroyed” a recreation center where “people, civilians, and [military] base personnel were having dinner on Saturday night.”

The strikes were acknowledged by Ivan Fedorov, Ukraine’s former administrator of Melitopol city, who said they had targeted Russian military bases.

Federov last month said Russia had turned Melitopol into “one giant military base.”

“The Russian military is settling in local houses they seized, schools and kindergartens. Military equipment is stationed in residential areas,” Federov said in November.

The Melitopol mayor Ivan Fedorov said there had been several explosions, including at the Melitopol Christian Church, “which the occupiers seized several months ago and turned into their hideout.”

Fedorov, who is not in Melitopol, said there were dead and wounded among the Russian forces there.

Meanwhile, Russian officials said Sunday morning that Ukrainian missiles had hit several apartment buildings in the Donetsk People’s Republic and that some landed near the Opera and Ballet Theater and the Kalinin Hospital.

The Ukrainian military has not yet confirmed or commented on the attack.

Donetsk has been held by Russian-backed separatists since 2014.

The attack on Melitopol came amid social media footage and reports of several blasts in the Crimean city of Simferopol at around 9 p.m. local time on Saturday.

There were also reports of explosions in Sevastopol, the headquarters of the Russian Black Sea fleet; at a Russian military barracks in Sovietske; and in Hvardiiske, Dzhankoi and Nyzhniohirskyi

The blasts come after Moscow ramped up its missile attacks on Ukraine last week, following Russian claims that Kyiv was behind recent drone hits on military airfields deep inside its territory.

There are conflicting accounts surrounding the explosions in Crimea.

The unofficial Crimean media portal “Krymskyi veter” said an explosion at a Russian military barracks in Sovietske had set the barracks on fire and there were dead and wounded.

However, a pro-Russian Crimean channel claimed that the fire at the barracks had been caused by “careless handling of fire.”

“Two people died. Now all the servicemen, about two hundred people, are accommodated in another premises,” it said.

Sergey Aksenov, the Russian-appointed head of Crimea, said on Telegram: “The air defense system worked over Simferopol. All services are working as usual.

Mikhail Razvozhaev, governor of Sevastopol, said the explosions were due to firing exercises.

The news comes amid reports that 1.5 million people in the Odesa region of Ukraine have been left without power following strikes by Iranian-made drones.

He said “Ukrainian sky defenders” had shot down 10 of the 15 drones, but the damage was still “critical” and he suggested it will take a few days to restore electricity supply in the region.

“Only critical infrastructure is connected and to the extent where it is possible to supply electricity,” he said.

Ukraine has been facing a wide assault on its critical infrastructure and power sources since early October. This has left millions across the country facing power cuts amid freezing winter temperatures.

“In general, both emergency and stabilization power outages continue in various regions,” Zelensky said. “The power system is now, to put it mildly, very far from a normal state.”

Ukraine on Saturday received “a new support package from Norway in the amount of $100 million” that will be used “precisely for the restoration of our energy system after these Russian strikes,” Zelensky added.