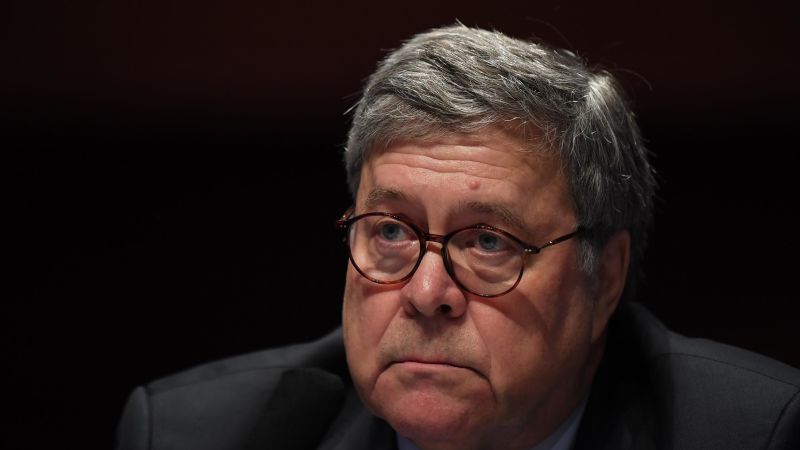 In December 2020, after then-Attorney General William Barr publicly refuted President Donald Trump’s claims that the election was rigged, White House staffers drafted a press release that would’ve called for the firing of anyone who disagreed with Trump’s claims, according to a new transcript from the House select committee investigating January 6, 2021.

The draft statement ended with, “Anybody that thinks there wasn’t massive fraud in 2020 election should be fired,” according to the deposition.

The draft statement – which was never sent out, and hadn’t been revealed before Friday – was brought up during the committee’s deposition of Trump White House Counsel Pat Cipollone, according to the transcript. Congressional investigators told him that they likely obtained the statement from the National Archives, which turned over documents from the Trump White House.

The committee also said during the Cipollone interview that White House aide Cassidy Hutchinson previously testified that Mark Meadows gave her the draft statement – which was a handwritten note – after an Oval Office meeting on the same day Barr made his public comments refuting Trump. It appears that the statement didn’t explicitly name Barr.

“By the way, I wasn’t fired,” Cipollone quipped to the committee.

The Cipollone deposition is one of nearly 50 additional transcripts released Friday night by the January 6 committee. The latest batch contained interviews with key witnesses, including Trump White House insiders and lawyers who worked for the Trump campaign.

Elaine Chao, who served as Trump’s transportation secretary, said she had no recollection of discussing the 25th Amendment after the insurrection, according to a transcript of her deposition with the January 6 committee released Friday.

Asked by congressional investigators if she had concerns about Trump’s mental fitness, Chao said that she didn’t go to many White House meetings by the end of Trump’s tenure. Chao was careful not to be too critical of Trump in her interview. She said she had not met with him in some time.

“By that time, I did not have personal contact with him,” Chao said. “I did not go to the White House, there were no meetings, so I hadn’t been in close proximity to him.”

Chao, who resigned on January 6, said she stepped down once she realized “the full ramifications of the actions that were taken by some people and the results that occurred.” Asked about Trump’s conduct that day, she said: “I wish he had acted differently.”

Asked about the inner workings of the Trump White House, and who he trusted among his aides and advisers, Chao said, “I’m not so sure he trusted anyone.”

Chao said she does not remember talking to other cabinet members that day – even though Labor Secretary Eugene Scalia told the committee he spoke with her.

Ivanka Trump, who served as senior White House adviser to her father, handed over text messages to the January 6 committee, a newly released transcript of her testimony reveals.

It wasn’t previously known that she provided text messages to the panel, though video clips from her April deposition were featured during the committee’s public hearings this summer.

The committee’s line of questioning did not delve into the contents of her texts, but instead veered into her father’s cell phone habits, including whether he ever sent and received text messages. Ivanka Trump said she “never” exchanged texts with her father on “any device.”

Still, this is the latest example of how the committee obtained a wealth of evidence, including materials that weren’t previously known.

Sidney Powell, a conspiracy-peddling attorney who helped Trump’s attempts to overturn the 2020 election, said Trump and his allies believed he couldn’t have lost because of his large “rallies” and “common sense,” according to a transcript of her deposition to the January 6 committee released Friday.

She said that was the consensus in the room at a White House meeting that she attended with Trump, just a few days after the election. She told the committee that Trump’s then-attorney Rudy Giuliani was also there along with White House aides, according to the transcript.

“He wanted to know the truth,” Powell said, referring to Trump. “And our general consensus was that the vast majority of people had poured out in support of the President. The rallies indicated that. All the information that we had indicated that. And the numbers that we saw on election night simply didn’t jibe with common sense.”

She also claimed “math geniuses” reached out to her to tell her that Joe Biden’s victory was statistically impossible.

The testimony shows just how paper-thin the fraud theories emanating from Trump’s orbit actually were.

Despite her assertions, there is no evidence that the outcome of the 2020 election was tainted by widespread fraud or vote-rigging. Many of the conspiracies Powell has promoted about the election have been thoroughly debunked.

During the presidential transition, Trump nearly appointed Powell as a special counsel to use the powers of the federal government to investigate her baseless voter fraud theories. Senior White House officials and attorneys vehemently opposed that idea and it never ended up happening.

Cipollone told the January 6 committee that it “would have been a disaster” if Trump made Powell a special counsel, according to a transcript of his deposition.