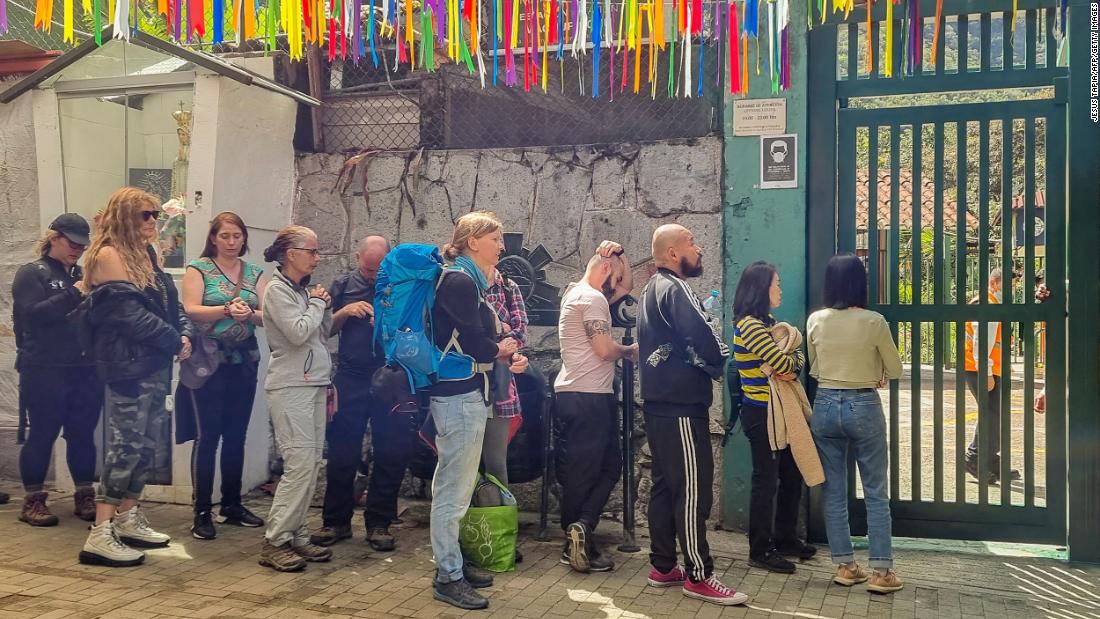 (CNN) — About 300 tourists from around the world have been left stranded in the ancient city of Machu Picchu, according to the mayor, after Peru was plunged into a state of emergency following the ousting of the country’s president.

Former President Pedro Castillo was impeached and subsequently arrested in early December after announcing his plan to dissolve Congress. The unrest sparked by his arrest has prompted international warnings about travel to Peru.

“We have asked the government to help us and establish helicopter flights in order to evacuate the tourists,” Baca said. The only way to get in and out of the town is by train, and these services are suspended until further notice, he said.

Trains to and from Machu Picchu, the primary means of accessing UNESCO World Heritage Site, were halted on Tuesday, according to a statement from PeruRail, Peru’s railway operator in the south and southeast regions of the country.

“PeruRail said they are still reviewing the situation,” Baca explained.

The mayor also warned that Machu Picchu is already suffering from food shortages because of the protests, and the local economy relies 100% on tourism.

Baca called on the government, led by new President Dina Boluarte, to establish a dialogue with the local population to put an end to the social unrest as soon as possible.

PeruRail has said it would assist affected passengers in changing the dates of their travel.

“We regret the inconvenience that these announcements generate for our passengers; however, they are due to situations beyond the control of our company and seek to prioritize the safety of passengers and workers,” the company said in a statement.

Travelers wait outside the airport in Cuzco on Friday after it was closed because of protests.

“LATAM maintains constant monitoring of the political situation in Peru to provide the pertinent information according to how it may impact our air operation,” the airline said in statement.

“We await the response of the relevant authorities, who must take corrective measures to ensure safety for the development of air operations.”

It added: “We regret the inconvenience that this situation beyond our control has caused our passengers and we reinforce our commitment to air safety and connectivity in the country.”

Warnings from the US, the UK and Canada

Demonstrators clash with police during a protest in Lima on Thursday.

The US State Department has issued a travel advisory for citizens traveling in Peru, which it has listed as a level three “reconsider travel” destination.

“Demonstrations can cause the shutdown of local roads, trains, and major highways, often without prior notice or estimated reopening timelines.

“Road closures may significantly reduce access to public transportation and airports and may disrupt travel both within and between cities,” it warns.

The State Department is asking travelers in Peru to sign up for STEP alerts from the US Embassy if they haven’t yet.

The United Kingdom’s Foreign, Commonwealth & Development Office has also warned its citizens about the situation.

“British nationals should take particular care to avoid all areas of protests. If possible, you should remain in a safe place. … You should plan ahead for severe disruption to any plans,” the FCDO said Friday evening on its website.

It also told that travelers arriving in the capital of Lima that there is no ability to travel to or from many regional areas– including Cusco and Arequipa — and that more disruptions are possible.

British nationals were also warned to respect Peruvian curfews put in place and to monitor local news and social media for more information.

Canada’s Global Affairs department has warned its citizens to “exercise a high degree of caution” in Peru and to avoid nonessential travel in numerous regions. Canada’s Global News spoke to one Canadian stuck in the small town of Ica in southern Peru, who said he’s now away from civil unrest but was robbed in taxi.

Tourists running out of medications

An American tourist who’s stuck in Machu Picchu has run out of medication and is unsure when she’ll be able to leave the small town and get more, she tells CNN.

Florida resident Kathryn Martucci, 71, was on a group trip with 13 other Americans when Peru went into the state of emergency, she said.

According to Martucci, her travel group was unable to grab the last train out of the small town before the railroad was suspended.

Her son Michael Martucci, who lives in the United States, also spoke with CNN and has been trying to help his mother find a way out.

“They’ve been there since Monday, and now she and the other people she’s with are running out of the medications they need,” Martucci said. “There’s nothing in the tiny town they’re stuck in. They’re safe and have food thankfully, but there’s no way to get more medication.”

Martucci said her group was scheduled to stay in Machu Picchu for two days, so they were told to pack light and only bring a two-day supply of medication.

On Friday morning, Martucci said her tour guide took her group to city hall to be medically evaluated in hopes that local officials would understand their situation and help them find a way out.

“There were about 100 tourists in line, and we waited for two hours before we saw the doctor,” Martucci said. “They told me I was a priority, and that they were going to try to get me on a helicopter out of Machu Picchu in the next two days.”

Yet, Martucci is unsure whether that will happen, she told CNN.

“There several people in need of help, and a helicopter can only carry 10 people. We don’t know what’s going on.”

Top image: Stranded tourists queue at the train terminal in the town of Machu Picchu, Peru, on December 14. (Photo by Jesus Tapia /AFP via Getty Images)