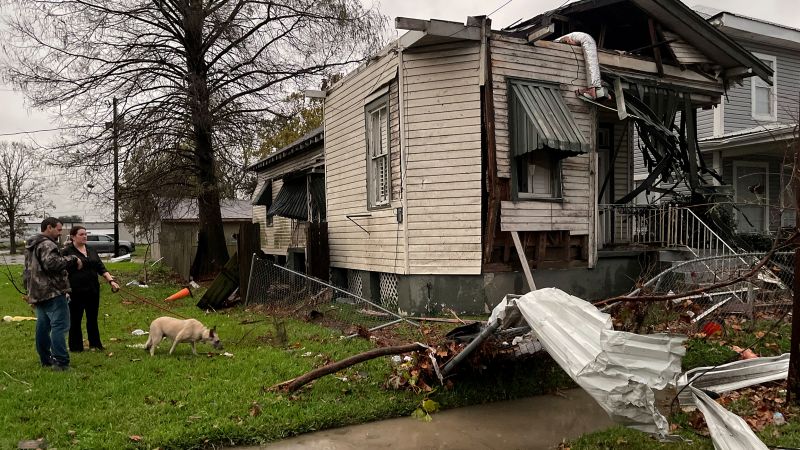 A severe weather system cutting through the South has left a trail of destruction in Louisiana, killing at least three people and injuring dozens of others as violent tornadoes touched down, collapsing homes, turning debris into projectiles and knocking out power.

The deaths attributed to storm-related events include a 56-year-old woman who died after a tornado hit her home in the Killona area in St. Charles Parish, according to the Louisiana Department of Health.

Additionally, a boy and his mother were found dead after a tornado destroyed their home Tuesday in the northwestern Louisiana community of Keithville, the Caddo Parish Sheriff’s Office said. The mother and son’s bodies were found hours apart, far from where their house once stood, officials said.

Multiple communities throughout Louisiana reported destruction, with roofs ripped off, homes splintered, debris littering roadways and cars flipper over. As ferocious winds downed power lines, more than 50,000 customers were left without power in across Louisiana and Mississippi Wednesday evening, according to PowerOutage.us. That number was down to less than 15,000 early Thursday.

There were at least 49 tornado reports across Louisiana, Mississippi, Texas, Alabama and Florida Tuesday and Wednesday, according to the Storm Prediction Center. More tornado reports are likely to come in as surveyors continue to check for damage.

And the threat isn’t over yet. More than 15 million people could see severe weather Thursday in parts of Florida, Georgia and the Carolinas as the severe weather shifts the east, according to CNN Meteorologist Robert Shackelford.

More than 1.5 million people were under tornado watches in southeastern Alabama, northern Florida and southern Georgia until 9 a.m. Thursday. Strong tornadoes are still likely as well as quarter sized hail and powerful wind gusts up to 70 mph.

The massive storm that brought the destruction to Louisiana and across the Southeast is part of a massive system that has also brought blizzard conditions in northern parts of the central US.

For Thursday, the storms are expected to weaken slightly, but there is a risk for severe weather for much of Florida, coastal Georgia and coastal Carolinas. Cities like Tampa, Orlando, Jacksonville, Savannah and Charleston could see damaging winds, large hail and isolated tornadoes, Shackelford said.

In Louisiana, the damage has been widespread, affecting multiple communities, prompting Gov. John Bel Edwards to declare a state of emergency.

As many as 5,000 structures were likely damaged when a tornado struck the city of Gretna, across the Mississippi River from New Orleans, Mayor Belinda Constant said.

Patsy Andrews was home with her children in Farmerville when she heard “rushing wind like a train” outside, she told CNN affiliate KNOE-TV.

Her son told her not to open the door when she went to investigate, but it was too late.

“All of a sudden that wind was so heavy, it broke my back door,” Andrews said. “The lights went off and all we could hear was glass popping everywhere.”

She said she and her daughter hit the floor, crawling into a hallway as glass shattered around them and water leaked through the roof. They ended up taking shelter in their bathroom.

“We just got in the tub and we hugged each other. We just kept praying and I just kept calling on Jesus,” Andrews said. Her family survived the storm but were left with damage to their home.

In the Algiers area of New Orleans, four residents were taken to area hospitals as the storm battered the area on the west bank of the Mississippi River, Collin Arnold, director of the New Orleans Office of Homeland Security and Emergency Preparedness told CNN. At least one house collapsed in the area and other residences and businesses have been impacted, Arnold added.

Officials in St. Bernard Parish also reported “major damage” in Arabi, where a tornado touched down, they said, leaving much of the area without power.

Crews in Arabi will be conducting search and rescue efforts throughout the night, St. Bernard Parish Sheriff James Pohlmann said. Ten people have been rescued due to severe weather, but no serious injuries or deaths have been reported, Pohlmann added.

Cindy DeLucca Hernandez thought she could beat the storm while driving home after picking up her 16-year-old son from school. But on the journey, she found herself facing a tornado.

“It was extremely scary, I’ve never ever been through anything like that,” Hernandez said.

Video she shared with CNN shows her waiting at red light as a tornado blew through Arabi, kicking up debris and taking out power lines.

“We started seeing debris and we got hit a couple of times by it and that’s when I put the car in reverse,” she said. Hernandez and her son made it home safe.

“Power lines down, homes severely damaged, rooftops ripped off,” he said in a video shared online describing the scene. “It is an extensive damage scene and a long path of destruction here on the west bank.”

The New Iberia Police Department reported on Facebook that two tornadoes touched down in the city, with several homes damaged and reports of people trapped in the Southport Subdivision.

The storm also left damage behind in Texas and Oklahoma as it moved through the south earlier this week, spawning tornadoes.

In Texas, at least seven people were injured Tuesday in the Dallas-Fort Worth area – including at least five hurt around the city of Grapevine. Two tornado reports were made in Grapevine, where police said a mall and other businesses were damaged.

An EF2 tornado struck Wise County near the communities of Paradise and Decatur, damaging homes and businesses, officials said. Video showed homes splintered, with roofs ripped off in Decatur.

In Wayne, Oklahoma, an EF2 tornado damaged homes, outbuildings and barns early Tuesday, officials said. No injuries were reported but homes were flattened or had roofs torn off, video from CNN affiliate KOCO shows.