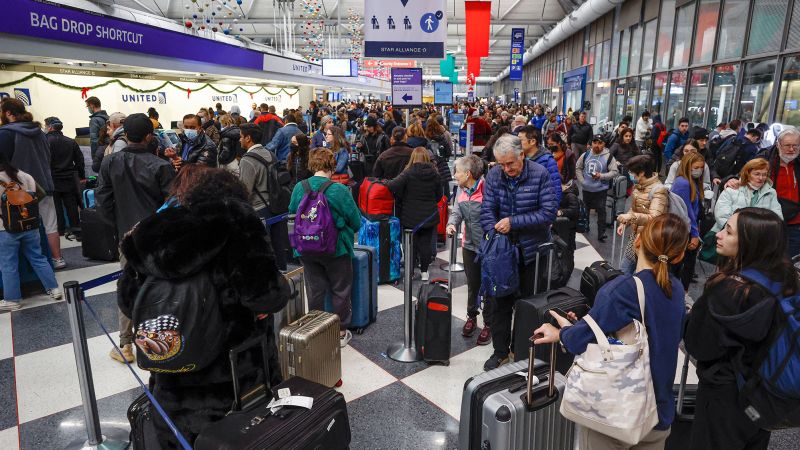 The impacts are being felt hardest in Chicago and Denver, where around a quarter of arrivals and departures – hundreds of flights at each airport – were canceled on Thursday, FlightAware data show.

At one point Thursday at Chicago’s O’Hare International Airport, delays averaging 159 minutes – almost three hours – were being caused by snow and ice, according to a notice from the Federal Aviation Administration.

Temperatures at the O’Hare dropped to 5 degrees Fahrenheit (-15 Celsius) around 6:45 p.m. local time. Light snow and fog/mist were reported by the National Weather Service.

The FAA said departing aircraft at Dallas Love, Dallas-Fort Worth, Denver and Minneapolis airports require a spraying of de-icing fluid for safe travel.

In the busy New York City metro area, the FAA warned that Newark flights should expect delays because of visibility issues.

The region’s three large airports are all warning travelers that the incoming winter weather front may disrupt their travels.

Many airlines have issued weather waivers allowing travelers to change their itineraries without penalty during a short window.

For those whose flights are still scheduled to fly, the Transportation Security Administration is recommending that passengers arrive at the airport earlier than usual.

John Busch, Reagan National Airport’s TSA federal security director, told reporters that all airports “expect to be busier this holiday season than we’ve been in several years coming out of the pandemic. We’ve already seen some of our busiest days, yesterday and today and we expect maybe Friday 30th ahead of the New Year’s holiday can be also a very busy day.”

But Busch added that TSA is “very well prepared to handle additional volume and throughput for our security checkpoints.”

Maria Ihekwaba, who was traveling from Chicago to Clear Lake, Iowa, with her granddaughter on Thursday morning, told CNN she was trying to depart as soon as possible.

“Especially when you’re traveling from Chicago, you never know what could happen in Chicago because it’s the Windy City,” Ihekwaba said.

Traveler Kari Lucas, from San Diego, told CNN she was visiting her sister and brother-in-law, but cut the trip short as she didn’t want to get caught in the impending weather.

“I was worried because San Diego, we don’t get these snowstorms,” she said. “So I don’t like it to be trapped in the airport for long periods of time.”

“It seemed like the best choice to make right now,” she said.

It’s not just flights that are being affected by the bomb cyclone.

Greyhound issued a service alert on Thursday warning customers that those traveling in the Midwest over the next two days may have their trips delayed or canceled altogether.

Greyhound, the largest provider of intercity bus service, listed more than a dozen cities from West Virginia to Minnesota that are among those impacted. They include:

Amtrak has also been forced to delay or cancel passenger service for some lines in the Midwest and Northeast.

Click here for disruptions the rail service posted as of 5 p.m. Thursday.

In its notice, Amtrak said that “customers with reservations on trains that are being modified will typically be accommodated on trains with similar departure times or another day.

“Amtrak will waive additional charges for customers looking to change their reservation during the modified schedule by calling our reservation center at 1-800-USA-RAIL.”

FedEx says it is watching the winter weather and has “contingency plans in place to help keep our team members safe and lessen any impact” on Christmas deliveries.

“In anticipation of severe weather, we have been repositioning assets so we can provide service where and when it is safe to do so,” FedEx told CNN in a statement.