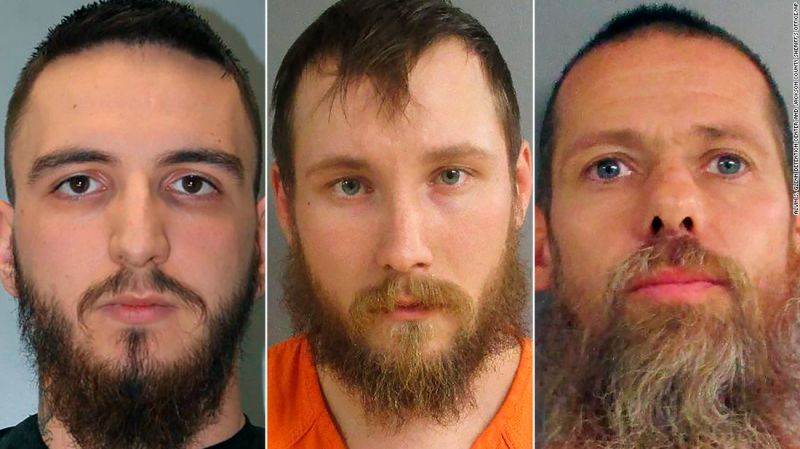 Three men were sentenced Thursday for providing material support for a terrorist act and two other state-level charges related to the 2020 plot to kidnap Michigan Gov. Gretchen Whitmer, according to a statement from the Michigan attorney general’s office.

Pete Musico, Joseph Morrison and Paul Bellar, who prosecutors said are members of a militia group known as the “Wolverine Watchmen,” were all sentenced on charges of gang participation, support of a terrorist act, and carrying or possessing a firearm during the commission of a felony, according to the Michigan attorney general’s office. Musico and Bellar must serve a minimum of 12 years and seven years, respectively. The alleged “commander” of the group, Morrison, who, according to affidavits filed with the attorney general’s office, went by the online moniker “Boogaloo Bunyan” online, must serve a minimum of 11 years.

“The defendants’ ultimate goals were to kill police and elected officials and kidnap the Governor of Michigan. These extraordinarily violent ends, coupled with the unequivocal conviction from the jury, demand the maximum sentence,” Michigan Attorney General Dana Nessel said in a statement.

They faced a maximum of 20 years for providing material support for terrorist acts, 20 years for gang membership and two years for the firearm charge.

Whitmer called the sentencing of Musico, Morrison and Bellar a “powerful signal” in a video statement played in court Thursday.

“Unfortunately, these defendants have not accepted responsibility for their actions,” Whitmer said in her nearly three-and-a-half minute victim impact statement. “If you want my advice about what to do with men like this, it’s simple: Impose a sentence that meets the gravity of the damage they have done to our democracy.”

Whitmer said she now scans crowds for possible threats and minimizes how much personal information she shares to avoid possibly endangering a loved one, staff member, or member of her security detail.

“I am changed, my family is changed,” Michigan’s governor said. “Ultimately, this isn’t about me, though. A conspiracy to kidnap and kill a sitting governor of the state of Michigan is a threat to democracy itself – and this kind of violent extremism has become disturbingly common.”

CNN reached out to attorneys for Musico and Morrison for comment.

All three will be eligible for parole after serving their minimum sentences, Bellar’s attorney, Andrew Kirkpatrick, told CNN. Whether they’re granted parole will be determined by their behavior in prison, their involvement in the plot, and whether they have any prior record variables, Kirkpatrick said.

Kirkpatrick told CNN that while he is “pleased” with the sentencing, “I’m not pleased with the verdict,” adding he believes the conviction will come back on appeal.

Prosecutors said the men “engaged in the planning and training for an operation to attack the state Capitol building and kidnap government officials, including Gov. Gretchen Whitmer,” CNN previously reported.

In August, a federal jury found two other men guilty of conspiring to kidnap Whitmer in 2020. Adam Fox and Barry Croft face a maximum sentence of life in prison for the kidnapping conspiracy conviction. They were also convicted of one count of conspiracy to use weapons of mass destruction. Their first trial ended in a mistrial.

The sentencing in the federal case against Fox, the alleged ringleader of the plot, is set for later this month.