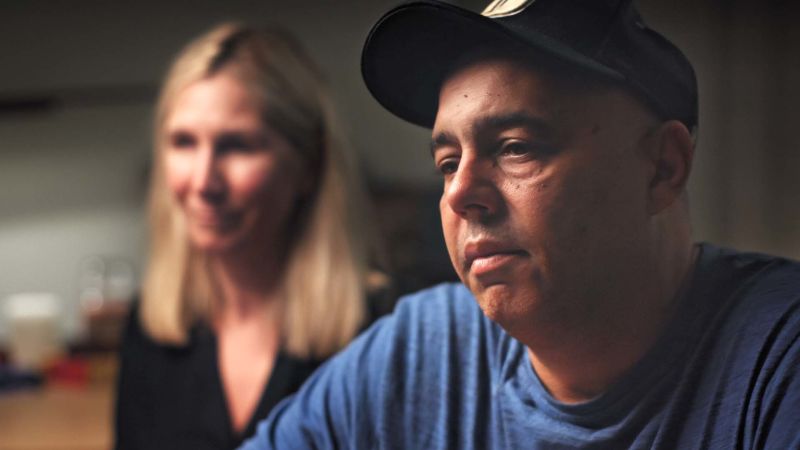 Editor’s Note: In this series finale of “This is Life with Lisa Ling,” the show profiles interracial couples. The series airs this Sunday at 10 p.m. ET.

A year after his Tennessee home was burned down and a racial slur was spray-painted on his property, Alan Mays says he’s still pleading with authorities for answers to what he’s calling a hate crime.

Authorities are actively investigating the cause of the fire that destroyed the family’s seven-bedroom home in Ripley last November, but Mays says he’s growing disillusioned as his family is now facing homelessness. “We were never given any kind of closure,” the Iraq War veteran told CNN.

Mays, who is Black, claims that authorities are treating the fire as an accident despite a documented pattern of harassment against his multiracial family. From repeated break-ins to security camera footage of people shouting racial slurs around their house, Mays says his family has been targeted for years.

If he were a White man, this would have been settled in 2015 when he says the harassment originally began, Mays said. “They did not go after anybody. They didn’t try. They didn’t want me out there,” Mays said.

The fire occurred early in the morning on November 1, 2021, while the Mays family was away on vacation. Firefighters arrived at their home because their fire alarm was going off and a neighbor had called in saying she could see flames from the house, according to the incident report from the Ripley Fire Department.

The report also states there was no nearby water source, so water had to be shuttled from other county departments, though Mays says there’s a fire hydrant at the end of his street.

The house was a “total loss,’” the report states. It also notes “graffiti” had been painted on a wall above their pool.

Mays says that graffiti was a spray-painted racial slur: “n***er lover.” When the fire chief told him about the loss of his home and that slur, Mays said he could do nothing but cry.

The Ripley Police Department and Ripley Fire Department both did not respond to multiple requests for comment.

Tennessee law prohibits an incident being called a hate crime until authorities have identified a suspect, which law enforcement has yet to do. As a result, the case is currently pending as a “suspicious fire.”

“We are limited in what we’re able to release as our investigation into the incident remains active and ongoing,” the Tennessee Bureau of Investigation told CNN in an emailed statement.

The last time Mays spoke to the bureau was in April, he said, and he’s yet to receive any information.

When the bureau initially surveyed the scene last November, they didn’t want to investigate the spray-painted slur, and instead wanted to focus solely on the origins of the fire, Mays said.

But that didn’t make any sense to him, he said. To Mays, that slur is much more than graffiti – it’s a message to leave and never return; it’s a message of hate.

Interracial marriage has seen a steady rise in the United States since 1967 when the Supreme Court overturned anti-miscegenation laws, and according to Gallup, most American adults now approve of marriage between Black and White people.

But some studies suggest that rates of disapproval regarding interracial relationships are underestimated. It’s no secret that interracial couples still face discrimination and hostility from others, sometimes even leading to violence.

Mays, whose Army service ended with an honorable discharge after a rocket blast injured him in 2009, told CNN navigating this past year has been the most difficult thing he’s ever experienced.

His entire family has been left traumatized by the fire, Mays says. His children are confused and have recurring nightmares. His wife cries often and takes medication for chronic anxiety attacks, and they’ve both been receiving therapy through benefits provided by the Department of Veteran Affairs.

Since the fire claimed their home, Mays said he and his family have been staying in an apartment complex south of Nashville. But he said they’ll be homeless next week because their insurance company won’t pay for their housing anymore.

“So, what am I gonna do? I’m a nervous wreck. I haven’t slept in two nights, okay, because I don’t know what to do,” Mays told CNN. “I’m lost … I’ve done everything I could do. I did everything the right way.”

Affectionately known as “the city of hospitality,” Mays initially appreciated the God-fearing nature of this community.

“They have their Bibles; they go to church. It seemed like a place that you’d want to have your family,” Mays said.

Though Ripley’s population is nearly 40% White and more than 54% Black, according to the US Census Bureau, Mays said he was the only Black man living in the predominantly White subdivision.

After the fire, none of his neighbors offered his family any help – or even extended condolences, he told CNN.

Mays said this reaffirmed the pattern of strange events that his family had experienced since moving to the neighborhood. They’ve had to deal with strangers parking at the bottom of their driveway at night and taking pictures of them, poisoning their dogs, breaking into their garage, flying drones over their house and other disturbing instances, Mays claims.

His burglar alarm went off 37 times between 2020 and 2021, and he’s kept all 20 of the police reports he’d filed concerning these puzzling incidents, he said.

“There were always things happening at my house,” Mays said. “And I told my wife after they tried to poison our dogs, ‘Listen, that’s how they do it in the South. They mess with your cars, your animals.’”

Their security cameras have captured multiple videos of people around their house and sometimes shouting racial slurs, according to Mays. They even caught images of a figure standing inside Mays’ bedroom, he said. But authorities could never identify anyone, Mays said.

Mays had to buy six new security cameras in a year and a half because they were constantly being tampered with, he added. The night of the blaze, he had not yet replaced the last set of ruined cameras.

Kirsten Mays, Alan’s wife, said she doesn’t want to live in the United States anymore after what their family has gone through. Originally from Germany, she said she expected more from law enforcement in this country.

When she and her husband went to the police station after one instance when someone broke into their home, she said that the extent of their help was to tell them to change their locks and get better cameras.

“It’s no way possible that people are living like this and treating you like this, and no one does anything to defend you,” she said.

On top of his community’s apparent indifference and the authorities’ perceived inaction, Mays told CNN that he’s also been having trouble with his insurance company.

He filed a homeowner’s insurance claim with Tennessee Farm Bureau Insurance immediately after his house burned down. He filed a complaint against them on September 21 for taking too long to give him a decision. They eventually sent him two similar denial letters on October 3 and October 13 – nearly a year after Mays filed the claim.

The October 3 denial concluded that the Mays family may have conspired to start the fire themselves and that Mays did not inform them of a pending lawsuit against him for an unpaid credit card. The October 13 denial similarly asserts that Mays did not notify the company of a felony charge for passing a bad check in 2001 — which a judge dismissed years ago, according to court records.

“We gave the insurance company every piece of information they asked for,” Mays said. “We did every interview.”

But despite these letters, Mays received correspondence on November 4 that his claim had not been wholly denied, which just confuses him. He’s exhausted with all the different answers.

Amid the difficulties last year, Mays’ brother created a GoFundMe to assist in rebuilding their lives.

Whether it’s Mays’ former neighbors, Ripley’s fire and police departments, his insurance company, or even federal investigators, Mays feels there has been failure after failure in keeping his family safe and receiving justice.

The social systems meant to protect them have fallen through, Mays said.

“We believed in the system,” Mays said. “I fought for that system. And then when it came time for the system to reach out and help us, it has done nothing but let us down.”