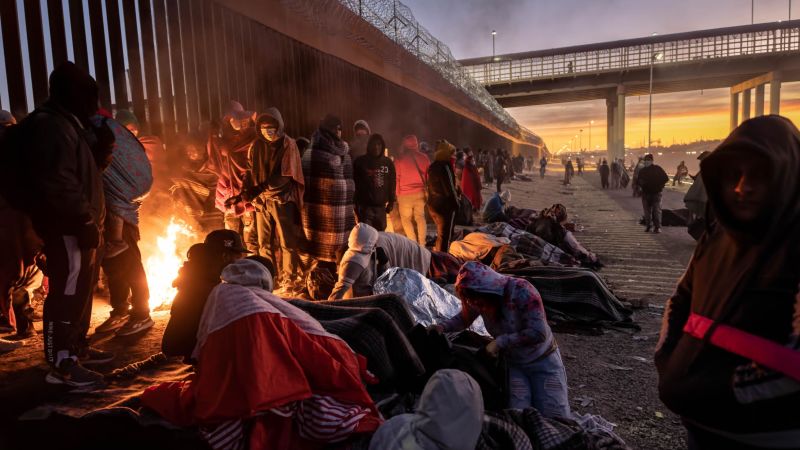 The Supreme Court said Tuesday that the controversial Trump-era border restriction known as Title 42 will remain in effect while legal challenges play out, a move that ensures that federal officials will be able to continue to swiftly expel migrants at US borders at least for the next several months.

The 5-4 order is a victory for Republican-led states that urged the Supreme Court to step in and block a lower court opinion that ordered the termination of the authority. The Biden administration has said it was prepared for the authority to end and had put in place precautions to guard against confusion at the border and any potential surge of migrants.

In its order, the court also agreed to take up the states’ appeal this term. The court said it would hear arguments on the case during its argument session that begins in February 2023.

Justices Sonia Sotomayor and Elena Kagan said they’d deny the application, but they did not explain their thinking. Conservative Justice Neil Gorsuch also dissented and explained his thinking in an order joined by liberal Justice Ketanji Brown Jackson.

Gorsuch said he does “not discount the States’ concerns” about border security. But Gorsuch noted that Title 42 was put in place to combat Covid-19, and “the current border crisis is not a Covid crisis.”

“Courts should not be in the business of perpetuating administrative edicts designed for one emergency only because elected officials have failed to address a different emergency,” Gorsuch wrote.

Since March 2020, Title 42 has allowed US border agents to immediately turn away migrants who have crossed the southern border in the name of Covid-19 prevention.

Immigrant advocates and public health experts have long denounced use of the public health authority along the US southern border, arguing it was an inappropriate pretext for barring migrants from entering the United States. In nearly three years, the authority has been used over 2 million times to turn migrants away, according to US Customs and Border Protection.

At the border, migrants have been waiting in encampments in Mexico for months, anticipating the end of the authority so they can make their claim of asylum in the US. Immigrant advocates have tried to disseminate updates and information to migrants, but desperation has grown, especially as temperatures drop.

El Paso, Texas, has been at the center of the crisis as thousands of migrants have crossed that region of the border. The city opened government-run shelters at its convention center, hotels and several unused schools to care for migrants, though some have still had to sleep on the streets in cold temperatures.

The Department of Homeland Security has been putting in place a plan for the end of the authority that includes surging resources to the border, targeting smugglers and working with international partners.

The White House said it would comply with the order.

“Today’s order gives Republicans in Congress plenty of time to move past political finger-pointing and join their Democratic colleagues in solving the challenge at our border by passing the comprehensive reform measures and delivering the additional funds for border security that President Biden has requested,” White House press secretary Karine Jean-Pierre said in a statement.

Solicitor General Elizabeth Prelogar acknowledged to the Supreme Court last week that returning to traditional protocols along the border will pose a challenge, but said there’s no longer a basis to keep the Covid-era rules in place.

“The government in no way seeks to minimize the seriousness of that problem. But the solution to that immigration problem cannot be to extend indefinitely a public-health measure that all now acknowledge has outlived its public-health justification,” Prelogar wrote in a filing with the Supreme Court.

Lawyers for the American Civil Liberties Union, who are representing families subject to Title 42, had in arguments underscored the dangers faced by asylum seekers subject to the authority and sent back to Mexico.

Lee Gelernt, the lead counsel for the plaintiffs in the case, told CNN in a statement that they are “deeply disappointed” by the ruling, but will continue to fight to end the policy.

“We are deeply disappointed for all the desperate asylum seekers who will continue to suffer because of Title 42, but we will continue fighting to eventually end the policy,” Gelernt said.

“This order is procedurally bizarre, in that it agrees to a request to freeze a district court ruling by states that weren’t even parties to that decision solely to decide whether they should have been allowed to intervene and defend that ruling on appeal,” Vladeck said. “Title 42 aside, that has enormous potential consequences for the ability of states going forward to fight to keep the current president from rescinding policies of her predecessors.”

The GOP-led states had argued that they’d be harmed by the lifting of the authority because of the influx of migrants entering the United States.

“The border crisis that Respondents bizarrely and eagerly seek to cause would also inflict enormous harms to the States,” a filing, submitted last Wednesday, reads.

This story has been updated with additional reporting.