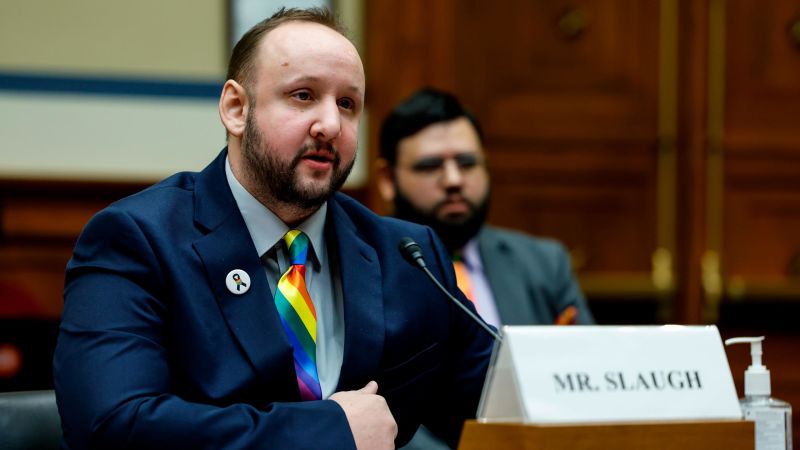 Survivors of the Club Q mass shooting directly tied Republicans’ rhetoric to the massacre at the Colorado LGBTQ nightclub and detailed their experiences on the night of the shooting, in prepared testimony read before the House Oversight and Reform committee Wednesday.

“To the politicians and activists who accuse LGBTQ people of grooming children and being abusers: shame on you,” said Michael Anderson, who survived the shooting. “As leaders of our country, it is your obligation to represent all of us, not just the ones you happen to agree with. Hate speech turns into hate action, and actions based on hate almost took my life from me, at 25 years old.”

Survivor James Slaugh gave emotional testimony, describing getting shot and watching his loved ones bleed. He also placed direct blame on lawmakers’ hateful rhetoric, saying it was “the direct cause” of the Club Q massacre. He also warned of the damage caused by hateful rhetoric that does not explicitly call for violence, including rhetoric on which bathrooms LGBTQ people can use and whether they can join certain sports teams.

“Hate rhetoric from politicians, religious leaders, and media outlets is at the root of the attacks like at Club Q, and it needs to stop now. Rhetoric that seeks to silence what sports we can play, what bathrooms we can use, how we define our family and who I can marry,” Slaugh said.”The hateful rhetoric you have heard from elected leaders is the direct cause of the horrific shooting at Club Q. We need elected leaders to demonstrate language that reflects love and understanding, not hate and fear.”

In her opening remarks, Chairwoman Carolyn Maloney, a Democrat from New York, said, “My heart breaks for those who endured this ruthless act of violence. The Club Q shooting represents an attack on all sacred places for LGBTQI+ people across the country that offer the promise of community and refuge from rampant bigotry,” adding, “The attack on Club Q and the LGBTQI community is not an isolated incident, but part of a broader trend of violence and intimidation across our country.”

Maloney told the survivors that “Their testimony will serve as a tremendous public service for their community and for our nation. Thank you. Let us honor them by recommitting to the bold action necessary to ensure that every person in the United States can experience to live authentically and safely regardless of who they love or how they identify.”

Ranking Republican member James Comer – who is expected to takeover the committee when Republicans retake the majority next year – sharply pushed back on those remarks and defended Republicans against claims they were contributing to any violence.

Comer said his “thoughts and prayers” are with survivors, victims and their families, and said, “No one should have to experience what you all have experienced. Let me state clearly, as we have consistently said, Republicans condemn violence in all forms. Unfortunately, Democrats are using committee time and resources today to blame Republicans for this horrendous crime. This is not an oversight hearing. This is a ‘blame Republicans so we don’t have to take responsibility for our own defund the police and soft on crime policies.’”

“On this committee, we should be using our time and resources to conduct oversight into the rise of violent crimes committed against all Americans and organizations. Every day, Americans no matter what the, what side of the aisle, are living in a high-crime environment,” Comer said.

When Club Q owner and survivor Matthew Haynes read his prepared remarks, he seemed to push back directly at Comer, saying, “I know that we, our Club Q community, are in the thoughts and prayers of so many of you. Unfortunately these thoughts and prayers alone are not saving lives. They’re not changing the rhetoric of hate.”

“We need safe places like Club Q more than ever. And we need you, our leaders, to support and protect us.” Haynes said, before reading some of the hate messages he received celebrating the deaths of gay people.

Haynes blasted Republicans for voting against the Respect for Marriage Act, saying by doing so they were sending a message that it “is OK to disrespect and not support our marriages. We are being slaughtered and dehumanized across this country in communities you took oaths to protect,” Haynes said directly toward lawmakers. “LGBTQ issues are not political issues. They are not lifestyles. They are not beliefs. They are not choices. They are basic human rights.”

“And so I ask you today, not simply what are you doing to safeguard LGBTQ Americans; but rather, what are you or other leaders doing to make America unsafe for LGBTQ people,” he said.

President Joe Biden signed the Respect for Marriage Act into law on Tuesday, after Congress passed it last month. The House vote was 258 to 169 with 39 Republicans joining the Democrats voting in favor. The bill passed the Senate with support of all members of the Senate Democratic caucus and 12 Republicans.