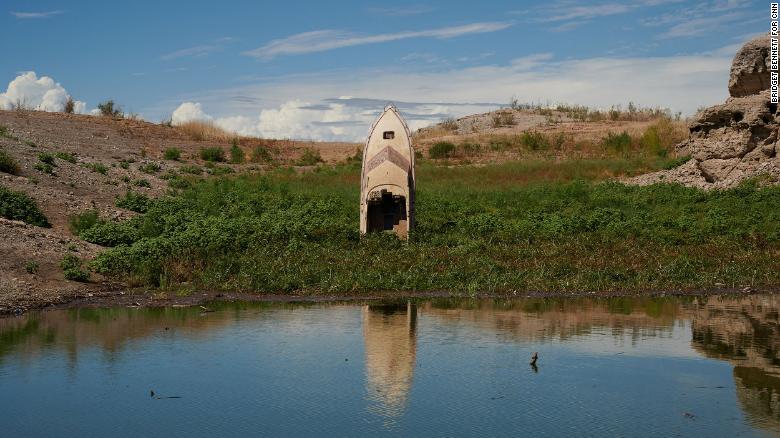 LAKE MEAD, NEVADA — Along a lonely stretch of Lake Mead’s southwestern shore, a rattlesnake huddles amidst a cluster of rocks, just feet away from the wreck of an abandoned houseboat that has been baked under the desert sun.

The wreck is cluttered with remnants of a past life: Cracked white dishes ringed with delicate floral motifs, coffee cups flung far from their matching saucers, a blender filled with dirt. Its wooden frame is splayed over the uneven rock bed, a scrum of split beams and rusted engine parts webbed with rope and electrical cords. A small white toilet sits perched atop the ruin. Its seat—still attached to the lid—can be found down by the water’s edge.

Early this year, the vessel was submerged under the lake’s emerald waters.

But formerly sunken boats sitting high and dry on the horizon are now a hallmark of the lake’s new reality as it becomes a focal point in one of America’s most dire climate crises—extreme drought in the West.

As the result of a decades-long “megadrought” across the region, Lake Mead’s water level has dropped around 170 feet feet since 2000, causing its shoreline to recede dramatically and exposing huge swaths of dry lakebed. Some locals and longtime visitors feel the drawback has made life at the lake a fraction of what it used to be. But the crisis is also attracting a new kind of tourist—those who come to see what the newly exposed shoreline has revealed.

Designated the first national recreation area in 1964, Lake Mead’s mirror-like surface and breathtaking mountain views have attracted hordes of visitors who zig-zag across water on boats and jet skis and trek to shore with towels in hand. As the reservoir has declined to historic lows, however, the scene is much quieter than the boaters’ paradise Joyce DiManno remembers.

A longtime resident of the park’s neighboring Boulder City, DiManno can see the vista of Lake Mead and its crown of mountains from a wide window stretching across her living room.

“We’ve been in this particular house for five years and it’s amazing to just see the water continue to disappear from our front yard,” she says.

Seated at her kitchen table, DiManno spreads piles of photo albums out before her, each holding snapshots of the 80s and 90s when she and her husband Frank visited the lake religiously.

As she combs through them, she points out snippets of weekends spent skiing and boating with friends, the countless hours passed lounging in coves and on beaches. At the time, drought was far from their minds.

The DiMannos eventually sold their boat in 1999. In the years that followed, the couple had a front-row view as many of their beloved spots became unrecognizable. At the lake’s southwestern Boulder Beach, shorelines have retracted so far that roads built to meet the water’s edge end abruptly several hundred yards from the water line. Cars loaded with folding chairs, umbrellas, kayaks and piles of food must navigate the bumpy off-road ride to the shore, their wheels grinding over delicate white shells that stud the dry lakebed.

The newly exposed stretch of shore near Boulder Beach was the site of a shocking discovery early this year when the body of a decades-old homicide victim was found inside an eroding barrel, likely tossed far offshore in the 70s or 80s. In the months that followed, several more remains have been found in the receding waters, including the body of a 2002 drowning victim.

News of the discoveries, as well as the exposure of artifacts such as a World War II-era landing craft, have catapulted the reservoir’s water shortage to national attention and attracted a motley collection of amateur treasure hunters, YouTube explorers and intrigued visitors hoping to spot the relics that now litter the drying lakebed.

Near the busy marinas of Hemenway Harbor, the sunken wreck of a WWII-era Higgins boat has become a more well-known antiquity emerging from the retracting waters. Its ribbed frame rises from the surface like the washed-up skeleton of a prehistoric fish. The long craft has been partially gutted, its engine removed.

Emerald waters partially submerge the frame of a WW-II era boat near the Lake Mead Marina.

Murky waters and layers of silt conceal the remainder of the boat’s U-shaped design, which the park says is still wrapped in its armored plating. Thick bands of rust streak its body, studded with underwater growth and tiny shells.

The amphibious landing craft was designed to deliver US troops from ships to open beaches, but the boats have long been used around the park. The park service is unsure how or when the boat was deposited there, but the shallow spot has become a sort of pilgrimage for curious explorers.

Another sleek vessel attracting visitors rockets out of the ground at a seemingly gravity-defying angle. In May, the craft was partially submerged, but its engine has become so firmly lodged in the packed silt that it has remained erect even as the lake has disappeared around it.

Dozens of other previously waterlogged vessels now nestle between tufts of brittle brush or rest on sandy shelves formed by the dropping shores. Most are crusted with layers of dirt and underwater growth that cling to their control panels. A handful appear untouched as their glossy paints glint in the sun, seemingly unscathed by years of soaking underwater. A buoy hangs dry from the rocks above the water.

The true scale of water loss is visible from almost every vantage point at the reservoir. Towering rock formations that jut out of the water’s surface and wall the lake’s edges are lined with a thick white stripe of sediment left behind by past water levels.
The stark “bathtub ring” ribboning across the mountains can be seen even from distant outlooks. The ivory ring sits flush with the top of the hulking Hoover Dam, which holds back water from the reservoir. Today, the dam’s towering turbines—capable of producing enough hydropower for roughly 1.3 million people annually—rise far out of the water. Without sufficient supply, they can only operate at just over half their capacity. If the water level drops about 100 feet more, they will no longer be able to produce power, according to the Bureau of Reclamation.

Though the water level has substantially lowered, the reservoir still offers an extraordinary playground for the millions who visit each year. Getting a boat onto the water, however, is becoming more of a challenge.

Since 2000, the National Park Service has spent nearly $50 million relocating and extending boat launching ramps and other infrastructure in an attempt to chase the falling water line. But even with these huge and costly adjustments, the park has been forced to close all but one ramp.

At the sole remaining launch ramp in Hemenway Harbor, the water is still too shallow for bigger boats to enter. On busy days, wait times can last hours as cars clog the road to the water with boats and trailers in tow. The long, paved runway to the ramp is punctuated with signs warning of the risk of boating in low waters.

When Alan O’Neill was superintendent of the park from 1987 to 2000, the park maintained as many as nine ramps for people to pull boats in and out of the lake, he says, remarking that having only one ramp available at the park is “tragic.”

“It breaks my heart to go out there,” he says. “We thought it would be damn near impossible for the lake to get to the level it is now.”

Alan O’Neill oversaw the Lake Mead National Recreation Area while the reservoir reached some of its fullest levels.
Signage at the Hemenway Harbor boat launch warns of low water levels.

Though O’Neill is quick to point out that the 1.5-million-acre park still offers abundant land-based recreation across its vast mountains, valleys and canyons, he believes the visitor experience at the lake has been significantly disrupted by the closure of facilities like launch ramps and marinas.

“I feel really bad looking out and seeing that, knowing how many people from our community were out enjoying not only the lake but the adjacent shoreline,” O’Neill says, recalling the park buzzing with activity.

News of extreme drought’s impacts on the lake may also be deterring visitors who have the impression that the scene has become bleak, says Bruce Nelson, director of operations at the Lake Mead Marina in Hemenway Harbor.

“Everybody is convinced that Lake Mead is this big mud puddle, and that’s not the case,” he says, emphasizing that even at low capacity, the reservoir remains one of the nation’s largest. “It’s still a really great lake for boating and enjoying yourself recreation wise.”

Aware of how water and ramp conditions are impacting the visitor experience, the National Park Service is holding several public meetings this month and is working on a plan to accommodate boating as the reservoir drops.

Recent federal projections show the reservoir’s levels are expected to continue plunging over the next two years, inching closer to “dead pool” levels where the dam is unable to release water downstream. The dire forecasts have already prompted federal mandatory water cuts for Nevada, Arizona and Mexico. California will likely soon follow. Still, even further cuts will be necessary to preserve Lake Mead and the Colorado River Basin. Fraught negotiations between states, tribes, cities and farmers have been tedious, however, as they decide who will take on the biggest restrictions.

But if states can’t commit to big enough water cuts, the federal government’s patience may soon run out. The US Department of Interior is making preparations to take its own actions, which may include limiting downstream water releases from the reservoir to prevent it from nearing dead pool levels.

Though Joyce DiManno no longer boats at the reservoir, she still visits occasionally to walk the widening shore. She’s hopeful the lake will avoid reaching crisis levels, but she doubts it will ever live up to the lively scene she remembers.

“Will it ever be what it was? No,” she says. “I truly feel we had the golden years of boating out there. It was just fabulous.”

A boat sits on a sandy shelf revealed by dropping waters.

“We never thought we would see anything like (what) is going on at this time now,” DiManno says.

As the falling waters persist, unexpected relics of the reservoir’s past continue to be unveiled. But in depths that can stretch hundreds of feet deep, decades-worth of artifacts remain submerged.

In the reservoir’s northern Overton Arm, the heavy frame of a bomber plane has rested on the lake’s floor for 74 years after a critical miscalculation of the plane’s altitude sent the B-29 Superfortress crashing into the surface and sinking to the lakebed.

Once more than 200 feet below the surface, the spot has been an extraordinary excursion for divers. But after water levels at the site fell around 100 feet, the park restricted diving there altogether this year while it determines how to preserve the historic relic in increasingly shallow waters.

Decades of soaking in the lake’s depths have left the plane’s aluminum body quilted with colonies of invasive mussels. Inside the dented cockpit, a parachute caught while the crew members safely evacuated lies stretched between the seats.

The future of the B-29 and the crucial waters that surround it remain unknown. But for now—and with each passing year—Lake Mead’s underwater curiosities creep closer to the surface.