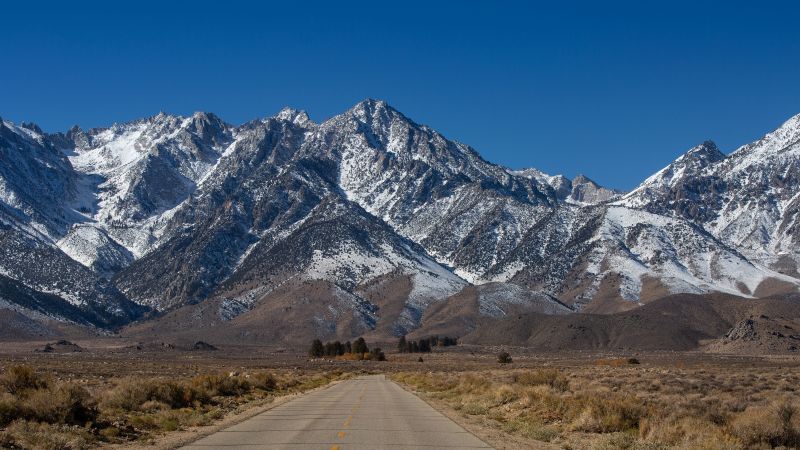 Winter in drought-stricken California is off to a fast start with a series of storms bringing a generous amount of rain and snow across Western states.

And it’s already starting to make a dent in California’s drought conditions, according to the latest US Drought Monitor released Thursday morning. The barrage of rain and snow brought a tiny glimpse of hope for drought-weary residents, who in the past three years have been facing back-to-back historically dry years that triggered unprecedented water shortages and landscape-altering wildfires.

Snowpack across California, as of Wednesday, is running more than twice the normal amount and trending near record levels for December, especially in the northern part of the state. But experts say they are “cautiously optimistic” about what this means for the coming months.

Andrew Schwartz, the lead scientist and station manager of University of California, Berkeley’s Central Sierra Snow Laboratory, says they are going to need more snow falling at the lab, which is located at Donner Pass east of Sacramento. It’s where he and other researchers measure snowpack totals and how much water equivalent would be available for the state’s residents.

“If we want to completely get rid of this drought, we need basically another year’s worth of precipitation [at the lab] – we need 60 feet of snow total and 30 extra feet of snow compared to what we would get on average,” Schwartz told CNN, noting that their average snowfall is at 30 feet and that they would need to keep up the momentum all winter long, which is very unlikely.

“The storm was fantastic, but it’s definitely not enough to end the drought,” he said.

High-elevation snowpack serves as a natural reservoir that eases drought, storing water through the winter months and slowly releasing it through the spring melting season. Snowpack in the Sierra Nevada accounts for 30% of California’s fresh water supply in an average year, according to the California Department of Water Resources.

With the multiyear megadrought, the snowpack in the Sierras had been at alarmingly low levels, while reservoirs, which are replenished by spring snow melt, are still below the historical average.

Nevertheless, this week’s storms brought some ease to the most parched areas of the state.

Daniel Swain, a climate scientist at UCLA and the National Center for Atmospheric Research, says the storm sequence the past week in the Sierra Nevada has been “honestly remarkable,” though he notes it would have been considered “unremarkable” just a few decades ago if it weren’t for the climate crisis. Over the last decade, California has trended much drier than usual, so the recent back-to-back precipitation events have been a significant change in pace.

“It was definitely a good-news storm on balance, since despite the short-term disruption, it dropped quite a bit of water in places that really need it due to long-term drought and climate change-driven aridification,” Swain told CNN. “And, importantly, it dropped that water as snow, which is accumulating over weeks and months as snowpack, rather than warm rains that immediately turn into runoff.”

Exceptional drought, the highest drought designation, was slashed nearly in half this week, covering only 7% of the state – the lowest California has seen since May. To put that into perspective, that figure was more than 28% a year ago. According to the latest update, exceptional drought continues to persist in the southern parts of the Central Valley, particularly in Kern, Kings, Fresno and Tulare counties.

While the storm did not break any long-standing records like last year’s snow, despite dropping several feet of snow in the highest elevations of the Sierra Nevada, Swain says mountain snowpack is now well above-average for the calendar date and that overall precipitation is relatively near average in most places.

“In the short term, California is in pretty decent shape from a water perspective,” Swain said.

Experts say it’s too early to tell how the recent storms will impact the drought, underscoring how last year’s record-breaking December snow sparked some early hope but later “flatlined” for the rest of the winter months.

“It’s like a football game – we’ve scored a touchdown in the first quarter, but there’s three quarters left before we can really determine what the game outcome is going to be,” Schwartz said. “So if we get to March or April, and we’re sitting at above-average precipitation, then we can start to relax. We can start to celebrate a little bit.”

Still, California is mired in yearslong drought and continues to face an unprecedented long-term water crisis. More than 97% of the state remains in some level of drought. And on Wednesday, the Metropolitan Water District of Southern California declared a regional drought emergency for Southern California to prepare for the fourth consecutive dry year.

Swain says that there are already indications of a potentially prolonged multi-week dry spell in the coming weeks – right at the peak of the wet season in California and the Southwest. If dry and relatively warm conditions form over the next few weeks, he says that could substantially offset the gains that recent snow and rain brought in recent weeks.

A La Niña advisory is still in effect for the region, but according to the National Integrated Drought Information System (NIDIS), that is expected to change by spring, where a wetter pattern is forecast to come through California. In the Southwest, La Niña typically causes the jet stream – upper-level winds that carry storms around the globe – to shift northward. That means less rainfall for a region that desperately needs it.

In addition, Swain says there has been a tilt in the seasonal outlook toward drier-than-average conditions across much of California and the lower Colorado River Basin, which will see additional unprecedented water cuts in effect in the new year, for January through spring.

“That does not bode especially well for long-term drought relief, particularly on the Colorado River system, where the rapidly accelerating water crisis threatens to reach new heights in 2023 unless unexpectedly wet conditions occur over the next few months,” he said.

If anything, Schwartz said, this is the time “we need to be conserving our water more and maybe even bumping conservation efforts because this isn’t a guarantee of a full deep winter.”