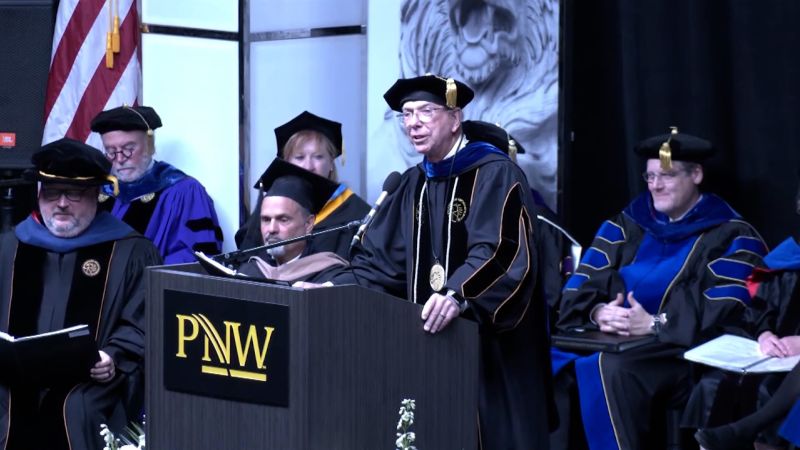 A video posted to PNW’s official YouTube page shows Keon taking the podium on December 10 following a speech from a commencement speaker and then uttering some apparently made-up words. As the crowd laughed, he said “that’s sort of my Asian version of his….” seemingly referring to the prior speaker.

On December 14 Keon made a public apology posted to PNW’s Twitter page. “I made a comment that was offensive and insensitive. I am truly sorry for my unplanned, off-the-cuff response to another speaker,” Keon said “I assure you I did not intend to be hurtful, and my comments do not reflect my personal or our institutional values.”

On December 16 though, the university’s Faculty Senate Executive Committee came to a unanimous decision demanding Keon’s resignation after a discussion.

According to Dave Nalbone, who’s a psychology professor at the university and the Vice Chair of the Faculty Senate Executive Committee, the committee sent the chancellor a letter that same day demanding he resign from his post.

“We asked him then, and later, for a response to our demand for his resignation; to date, we have heard nothing from him,” Nalbone said in a statement to CNN.

In the letter that was delivered to Keon the committee noted that Keon made offensive statements that insulted the Asian American and Pacific Islander community and caused national and international outrage.

The committee also wrote that Keon’s behavior does “does not reflect the diversity and inclusiveness that Purdue faculty, staff, and students value.”

The committee plans to follow through with a no-confidence vote and results should be in by Tuesday night, Nalbone said. The outcome of the vote doesn’t necessarily have immediate repercussions. Unless he decides to resign, the only people with removal power would be the board of trustees or president, Nalbone said.

CNN has reached out to Chancellor Keon and Purdue’s Board of Trustees for comment.