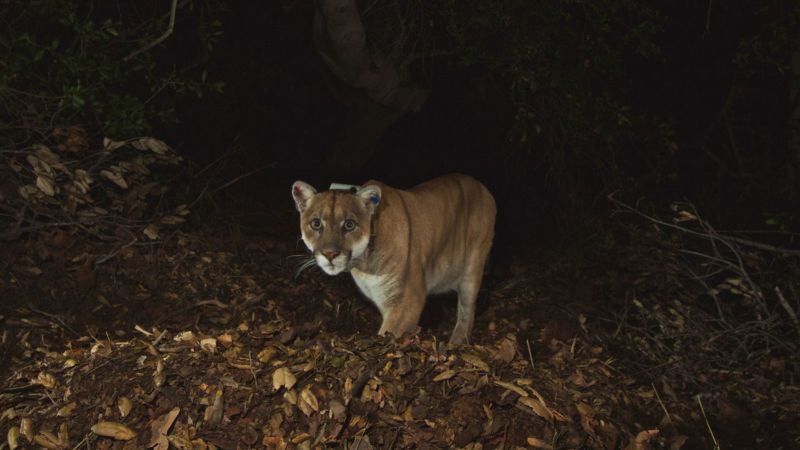 P-22, a mountain lion who has spent years in Los Angeles’ Griffith Park, has been euthanized after likely suffering injuries in a “vehicle strike,” officials say.

The big cat made made headlines last month after he attacked and killed a resident’s leashed chihuahua. He was captured by authorities on Tuesday, who used GPS data from his tracking collar to locate and anesthetize him.

The California Department of Fish and Wildlife made the decision to euthanize P-22 after a “comprehensive medical evaluation,” according to a news release Saturday.

The department said the “compassionate euthanasia” was unanimously recommended by the medical team at San Diego Zoo Safari Park and conducted under general anesthesia.

P-22 was given an “extensive evaluation” which “showed significant trauma to the mountain lion’s head, right eye and internal organs, confirming the suspicion of recent injury, such as a vehicle strike,” said the department. “The trauma to his internal organs would require invasive surgical repair.”

He was in poor health overall and “may also have had additional underlying conditions not yet fully characterized by diagnostics,” said the department.

Officials will not be seeking information on P-22’s possible run-in with a vehicle, they added.

“This situation is not the fault of P-22, nor of a driver who may have hit him,” wrote the department. “Rather, it is an eventuality that arises from habitat loss and fragmentation, and it underscores the need for thoughtful construction of wildlife crossings and well-planned spaces that provide wild animals room to roam.”

P-22 become a Los Angeles celebrity when he was photographed beneath the iconic Hollywood sign by a camera trap. The image was featured in the December 2013 issue of National Geographic.

The mountain lion even had his own Facebook and Instagram pages, where fans left heartfelt messages on Saturday.

P-22 also made headlines for breaching a 9-foot fence at the Los Angeles Zoo and mauling a koala in 2016.

“P-22’s survival on an island of wilderness in the heart of Los Angeles captivated people around the world and revitalized efforts to protect our diverse native species and ecosystems,” Newsom said in a news release.

Newsom’s father was a founder of the Mountain Lion Foundation and championed permanent protections for the species, according to the release.

“The iconic mountain lion’s incredible journey helped inspire a new era of conserving and reconnecting nature, including through the world’s largest wildlife overpass in Liberty Canyon,” Newsom added. “With innovative coalitions and strategies to restore vital habitat across the state, we’ll continue working to protect California’s precious natural heritage for generations to come.”

Earlier this year construction on a wildlife crossing spanning 10 lanes along Highway 101 began, with the hopes of creating a safer way for animals to roam in the region. In addition, Newsom promised $50 million for other similar projects throughout the state.

Beth Pratt, the California regional executive director for the National Wildlife Federation, also remembered the mountain lion in an emotional news release. She said it is “hard to imagine I will be writing about P-22 in the past tense now,” and expressed hope that future California mountain lions would be able to roam safely.

“Thank you for the gift of knowing you, P-22. I’ll miss you forever,” Pratt said. “But I will never stop working to honor your legacy, and although we failed you, we can at least partly atone by making the world safer for your kind.”