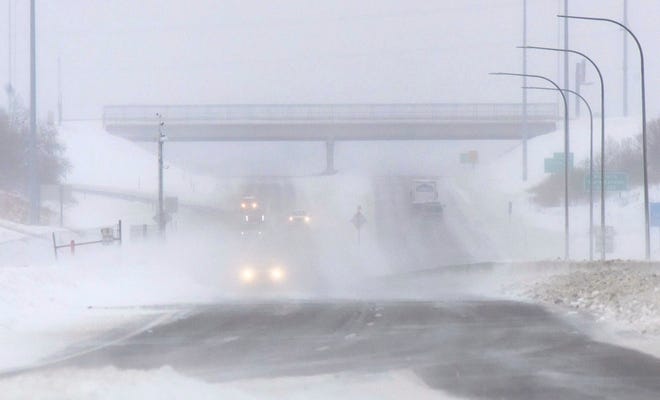 A powerful winter storm system that has lasted for over a week has now spawned a nor’easter threatening parts of Maine with up to 2 feet of snow Saturday.

Winter weather warnings are in effect through Saturday in parts of Maine, New Hampshire, Vermont and New York with gusty winds and heavy snow, according to the National Weather Service. The region may see snowfall rates of one to two inches per hour, dangerous travel conditions and scattered power outages Saturday, the weather service said.

Forecasters predicted heavy snow would impact parts of the Northeast into the weekend, and well-below-average temperatures could enter the north-central U.S. by Sunday.

Meanwhile, the South continued to assess damage after dozens of tornadoes killed at least three people.

Here’s what to know about severe weather impacting the U.S.

16 disasters at $1 billion each:How the US was impacted by weather in 2022

What’s the best way to remove ice from your windshield? There’s no need for vinegar

Up to 48 inches of snow recorded in Dakotas

In Cheyenne Crossing, South Dakota, 48-hour snowfall amounts reached 48 inches by Friday, according to AccuWeather meteorologist Alex DaSilva, who said the storm produced between 8 to 16 inches of snow across the Dakotas and Minnesota. AccuWeather experts expected snowfall to become increasingly scattered throughout Friday.

While conditions over the Dakotas and Northern Plains are expected to improve drastically into Saturday, the winter storm could cause concerns for lake-effect snow into the weekend as it pushes eastward into the Great Lakes, according to DaSilva.

The storm, which brought freezing rain to southern Pennsylvania and Maryland, also hit the Virginias with up to a half an inch of ice in some areas and triggered travel disruptions in the area, DaSilva said. The Virginia Department of Transportation warned drivers to drive with caution Friday as low temperatures could refreeze wet roads.

COVID-19 CASES RISING IN CHINA:What could that mean for the US?

“Freezing rain did avoid the major metropolis areas, but it’s going to be an all-snow event mainly up across northern New England from the Green and White mountains of Vermont and New Hampshire and the Adirondacks in New York,” DaSilva said.

While frigid conditions impacted the northern U.S., cleanup across the South continued Friday after dozens of tornadoes left a trail of destruction from Texas to Florida and killed three people in Louisiana – including an 8-year-old boy and his mother.

“Those tornadoes that roared across the South were associated with a cold front that was attached to the the blizzard up in the Midwest,” DaSilva said.

At least 40 confirmed tornadoes touched down between Dec. 13-15, The Weather Channel reported, including 16 tornadoes rated as EF2 on the Enhanced Fujita scale.

EF2s can reach wind speeds of 135 mph, according to the National Weather Service.