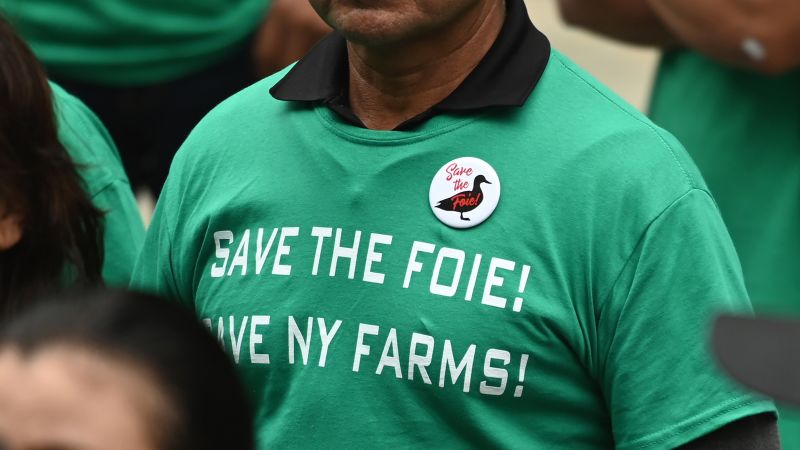 The state Department of Agriculture and Markets informed city officials Wednesday that the ban “unreasonably restricts” the operations of two farms that sued the city over the ban, La Belle Farm and Hudson Valley Foie Gras.

New York City had originally passed a bill in 2019 to ban restaurants and retailers from selling the fatty duck or goose liver, considered a delicacy by some.

In a letter to New York Mayor Eric Adams and Division of Legal Counsel Chief Stephen Louis, the department requested that the “City confirm that it will not enforce its ban on the sale of force-fed products” marketed by Hudson Valley Foie Gras and La Belle Farm.

The city ban on foie gras was to go into effect November 25. However, a state Supreme Court judge in September put the ban on hold as the lawsuit by the two Upstate New York Farms proceeded through the courts.

The original bill to ban foie gras called the luxury good a “force-fed product” and, in a statement to CNN in 2019, city Councilwoman Carlina Rivera – the prime sponsor of the bill – called force-feeding an “inhumane practice.”

What makes foie gras so contentious is the method of preparation. Foie gras is made of fattened duck or goose liver, and it has long been considered a French delicacy – so much that France has protected it as part of its cultural heritage.

But the product is made by force-feeding ducks or geese, a practice that many people, like Rivera, have found troubling.

“As a lifelong advocate for animal rights, I am excited that the Council has voted to pass this historic legislation to ban the sale of these specific force-fed animal products,” Rivera said in 2019.

Foie gras has long been a point of contention.

In 2012, California’s foie gras ban went into effect, only to have the ban overturned in 2015. Then, in 2017, the ban was upheld by a circuit court judge – a decision that was backed by the US Supreme Court in January 2019.