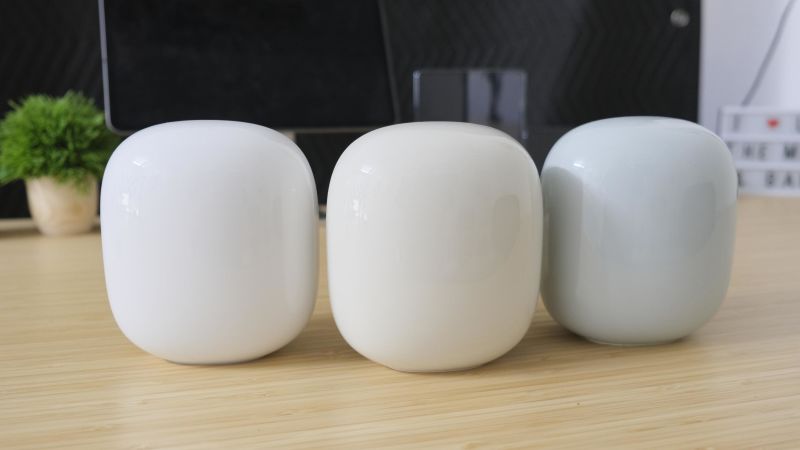 Google’s Nest Wi-Fi Pro is the company’s latest mesh Wi-Fi system designed to improve the speed and overall coverage area of your home internet. It boasts speeds up to 5.4 Gbps, in the lab at least, and can handle more than 100 devices.

I’ve been testing Nest Wi-Fi Pro for a few weeks now, and it’s clear to me that it’s one of the better Wi-Fi 6E systems on the market, but not quite the best.

The Nest Wi-Fi Pro offers good coverage and internet speeds for the price, but it’s held back by bugs and a relatively slow Ethernet port.

You then give your Wi-Fi network a name, pick a name for the room it’s installed in and you’re done. If you bought a two- or three-pack of access points, the Home app knows and asks if you’re ready to set up the rest of the nodes that came in the box.

If you select yes, you’ll plug in the access point, wait until the app finds it, scan a QR code on the bottom of it and you’re done.

I suggest setting up all of the access points in the same room and then moving them after everything is connected and up and running.

Once the network is up and running, you can go through and set up the family tools for limiting internet access on your kids devices, along with enabling a guest network.

Coverage and overall performance have been great

I live in a 3,300-square-foot ranch-style home with a basement, and work in a detached building that’s roughly 70 feet away from the house. Depending on the day or week, I have anywhere between 55 and 80 devices connected to my home’s Wi-Fi network.

My home Wi-Fi setup is a challenge for even the best of systems, but I was able to swap the Nest Wi-Fi Pro in place of the Eero Pro 6E system I’d been using and haven’t noticed much of a difference when it comes to performance or areas of insufficient coverage.

Each Nest Wi-Fi Pro access point is powerful enough to handle up to 100 devices and blanket 2,200 square feet in Wi-Fi 6E.

I’ve tested a lot of mesh Wi-Fi systems over the last few years, and I’ve learned there are typically a few spots within my home where mesh systems often fail to provide sufficient Wi-Fi coverage. One such area? My kids’ gaming corner of the basement, an area I’m sure to hear about if there’s any lag or sluggish performance.

Any of Eero’s Wi-Fi 6 systems, and now the Nest Wi-Fi Pro, are the only systems where I’ve never heard a word from my kids about their gaming experience. In fact, I didn’t even tell them that I changed our mesh system, just to make sure there wasn’t some sort of placebo effect at play.

My personal experience has been the same. I can roam throughout the house, streaming a video or playing a game on my Steam Deck, and as the access points hand off my device, I don’t see any lag or sluggish performance.

Related: Everything you need to boost the Wi-Fi signal in your home

Perhaps my favorite part about Nest Wi-Fi Pro is that the access points don’t look anything like a Wi-Fi access point. They look more like a smart speaker, or maybe even a smart clock. There’s a glossy finish to the plastic exterior, which comes in four different colors.

In total, each Nest Wi-Fi Pro access point measures 5.12 by 4.61 by 3.35 inches and weighs 1.31 pounds. There are two Ethernet ports on the rear of the device, near the bottom, with a USB-C cable in the middle of the ports that provides power using the included wall adapter.

Seriously, these access points will look great on any shelf or TV stand. And that’s not a bad thing — hiding your Wi-Fi access points in a cabinet or on the bottom shelf of your TV stand does nothing but hurt your network’s performance.

I first received the Nest Wi-Fi Pro a few weeks before it was released. I had ample time to test the system and write up the review to coincide with broad availability, but I’ve had to wait for some bugs and issues to be fixed before writing this up.

The first issue I discovered was that any speed tests run inside the Google Home app show a much slower speed than what the system is actually getting. I pay for a 1.2 Gbps down and 35 Mbps up connection with Comcast. However, when I first set up the Wi-Fi Pro system, I was seeing results of around 100 Mbps down, both in the app and when using third-party speed test sites.

Eventually, Google identified an issue with the Nest Wi-Fi Pro and issued an update that increased the throughput speeds that make their way to your home’s devices. However, the bug still exists that shows slower speeds within Google’s Home app. Google says there will be a future update to fix the speed test bug.

That said, I’m still not able to get the same type of wireless speed test results that I can when using the Eero Pro 6E system. The Nest Wi-Fi Pro is capping out at around 400 Mbps, which, honestly, is more than fast enough (and is exactly why I’m not seeing any performance issues). However, I can routinely get between 600 and 700 Mbps speeds when using the Eero Pro 6E mesh system.

Again, the speeds I’m getting from the Nest system are fast enough that I’m not currently seeing any performance issues. However, it’s concerning that a Wi-Fi 6E system isn’t living up to its full potential when it comes to overall speed.

But, the return of Ethernet isn’t all roses. Both ports on the Nest Wi-Fi Pro are limited to just 1 Gbps speeds. That means your network speeds are limited to 1 Gbps, even if you pay for faster service like I do.

Remember, I pay for 1.2 Gbps service, but my service is automatically downgraded to 1 Gbps just by plugging in Nest Wi-Fi Pro. In addition to improving coverage, speeds and network capacity, another selling point of Wi-Fi 6E systems is that it future-proof’s your home network. And while you may not be paying for speeds faster than 1 Gbps right now, you might be down the road, but your network will be limited because of the Ethernet ports. Frustrating.

Google’s Nest Wi-Fi Pro system is easy to set up and use, and offers reliable network performance. On top of all that, its coverage is as good as it gets. Starting at $200 for a single router (with a $300 two-pack and $400 three-pack available), it’s competitively priced for a Wi-Fi 6E system, with the likes of the Eero Pro 6E three-pack normally priced at $669 (but currently on sale for $489).

My complaints about speed and 1 Gbps Ethernet are valid, but also probably something that most people won’t need or even notice, at least in the near term. And while there’s nothing Google can do about the Ethernet ports via a software update, Google has said it’s working on addressing any bugs related to overall speed.

Google’s Nest Wi-Fi Pro is a worthwhile option for those who are either already heavily invested in Google’s smart home ecosystem or are looking to upgrade their home’s Wi-Fi network but don’t want to overspend.