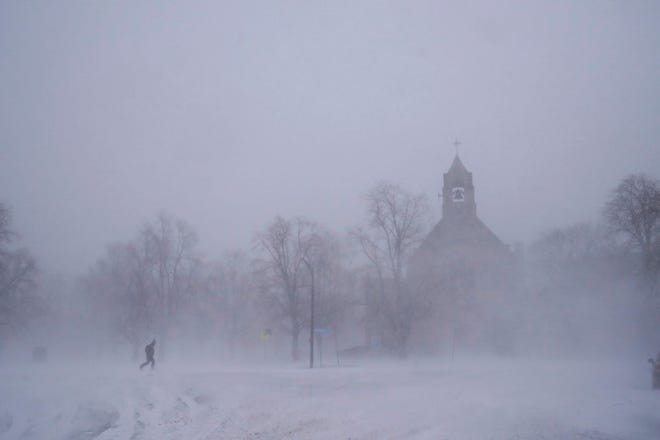 Millions across the U.S. woke up Christmas morning Sunday to unprecedented, frigid temperatures from a mammoth winter storm that has pummeled the nation with heavy snow and dangerous cold the past few days.

The storm has left at least 24 people dead, knocked out power to several hundred thousands of homes and businesses and canceled thousands of flights.

About 60% of the U.S. had been under a winter weather advisory or warning from the system, which has been called a “once in a generation” storm by forecasters and has stretched from the Great Lakes near Canada to the Rio Grande on the Mexico border.

More than 1,500 domestic and international flights were canceled as of early Sunday, according to the tracking site FlightAware.

Buffalo has endured brutal conditions with hurricane-force winds and snow that has triggered whiteouts and paralyzed emergency response efforts. New York Gov. Kathy Hochul said almost every firetruck in the city was stranded.

The National Weather Service said the snow total at the Buffalo Niagara International Airport stood at 43 inches at 7 a.m. Sunday. At least seven people have died in the area, with multiple people dying in their homes when responders couldn’t reach them, officials said.

In Ohio, about 50 vehicles were involved in a pileup that killed at least four. An 82-year-old woman was found dead outside of her assisted care facility in Michigan on Friday.

GLOBAL WARMING:Tempted to joke about global warming amid the freezing cold? Here’s what experts say about that.

The system intensified Friday into a bomb cyclone, a weather phenomenon known for its powerful winds, heavy blizzards and subzero temperatures that are created through a process known as bombogenesis.

Only a few regions in the U.S. were expected to escape bitter cold Christmas Day –parts of California, Oregon, Arizona and Florida are among the few spots in the nation that won’t experience wind chills below freezing, the weather service predicts.

A group of migrants was dropped off at Vice President Kamala Harris’ home in Washington, D.C., on Saturday night, when temperatures were below freezing.

The migrants were taken to local churches and shelters, according to multiple reports. Some of the migrants were seen by reporters without winter clothes, including some who were wearing T-shirts in on the frigid Christmas Eve.

The Migrant Solidarity Mutual Aid Network, which has been helping receive migrants in the nation’s capital since the spring, said it was prepared for the arrivals on Saturday, CNN reported.

It was not immediately clear how many migrants were brought to the vice president’s home, though multiple outlets reported it was several busloads of individuals.

The move is not the first time a group of migrants has been transported to cities across the United States. Multiple Republican governors have orchestrated the rides.Texas Gov. Greg Abbott sent two buses of Central and South American asylum seekers to the vice president’s Washington residence earlier this year.

USA TODAY has reached out to the White House for more information.

Forecasters on Saturday said snow would keep falling around the Great Lakes – up to 3 more feet through Monday in some areas of western New York.

High winds, freezing temperatures and heavy snow have been plaguing the region for days, leading to whiteout conditions.

New York Gov. Kathy Hochul described the snowstorm hitting western parts of the state as “one of the worst in history” at a press briefing Saturday morning.

A combination of snow, bitter cold and power outages prompted some Buffalo residents to leave their homes to seek heat. Hochul said the Buffalo Niagara International Airport will be closed through Monday morning.

When will the winter storm be over?

Widespread cold temperatures are expected to linger for days in many areas.

Forecasters expect a huge mass of cold air to continue affecting the nation into next week. Those temperatures are a concern from the Dakotas to Florida even on Monday and Tuesday.

“Wind chills will still bottom out in the 20s and low 30s Monday and Tuesday morning for most locations in the South outside of south Florida,” a Friday forecast says.

But low temperatures are forecasters’ primary concern for most of the country by Monday. Flooding, rain and other hazards are only expected to affect more localized regions.

What is wind chill?

Meteorologists define wind chill as how cold it feels while outdoors, and it’s based on the rate of heat loss from exposed skin caused by the wind-and-cold combination, according to the National Weather Service. Increased wind draws heat from the body, which then lowers the temperature of the skin and internal body.

“Frostbite may develop on exposed skin in as few as 10-20 mins, and hypothermia can quickly develop if you’re not dressed for the cold,” weather service experts in Chicago warned Thursday.