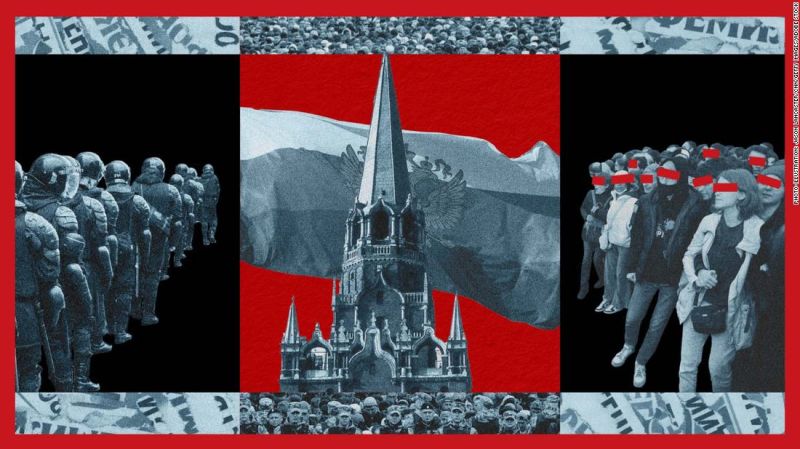 For Andrei Soldatov and his friends, February 24 marked the end of Russia as they knew it.

In the early hours of that day, President Vladimir Putin announced that he had ordered Russian troops into Ukraine. “And all of a sudden, everything we still believed in got completely compromised,” Soldatov, a Russian investigative journalist who lives in self-imposed exile in London, told CNN.

Life in Russia had for many years been getting more difficult for dissidents, independent journalists and anyone speaking up against Putin’s regime, but Soldatov said people like him still had some hope to hold on to. The war changed that, he said.

“It was horrible to live under Putin and it was very far from the idea of democracy, but you still had some established institutions which you would almost take for granted that they would exist no matter what, and all of a sudden, everything collapsed,” he said, pointing to the near complete eradication of any remaining independent media, civil society and human rights groups.

One woman who still lives in Moscow and whom CNN will call Olga, described February 24 as the point of no return. “Life turned into a nightmare from which it is impossible to wake up, round-the-clock reading of the news, protests at which there were more security forces than civilians,” she told CNN via an encrypted messaging service, describing the shame and hopelessness she feels. “The aggressor is our country. On our behalf, on my behalf, this terrible massacre is being waged,” she said.

CNN is not publishing the woman’s name and is using a pseudonym at her request because of the risks to her personal safety. Speaking to foreign journalists about her involvement in the demonstrations – and even the use of the word “war” as opposed to the Kremlin-approved term “special military operation” – puts her at risk of arrest and potentially a lengthy prison sentence.

While Russian state media gives the impression that everyone in Russia supports the war and Putin, many of the country’s more liberal, educated and well-traveled citizens have spent the past nine months horrified about the violence inflicted on Ukraine by their own country.

But with the increasingly repressive regime cracking down on any signs of opposition, the choices of those who dissent are extremely limited.

Hundreds of thousands of Russians have left the country, some out of principle or because they were facing persecution, others to avoid Western sanctions or the risk of being drafted into the military. Thousands have been detained, according to rights groups. Many others have been forced to withdraw from public life or lost their jobs, after hundreds of western companies withdrew from Russia and many local and foreign NGOs and campaign groups were shuttered.

The repression of dissent has been brutal. According to independent human rights monitor OVD-Info, there have been more than 19,400 detentions for protesting against the war in Russia and dozens are prosecuted every week under a new law that made it illegal to disseminate “fake” information about the invasion.

A court in Moscow used the law earlier this month when it sentenced Kremlin critic Ilya Yashin to more than eight years in prison for speaking up about the alleged killing of civilians by Russian troops in the Ukrainian town of Bucha, outside Kyiv. The Kremlin has denied any involvement in the mass killings, while reiterating baseless claims that the images of civilians bodies were fake.

Soldatov spoke to CNN on the day he received, in London, an official letter from the Russian authorities detailing criminal charges against him.

Like Yashin and hundreds of others, he is accused of spreading false information about the Russian military and law enforcement and is now on Russia’s wanted list. He denies the charges and says he was simply reporting the truth about the actions of the Russian government in the run up to and during the invasion of Ukraine.

Any remnants of a free press have been wiped out since the war started. Western publications and social media sites have been blocked online, forcing Russians seeking alternatives to the official propaganda to go underground using virtual private networks, or VPNs, which allow people to browse the internet freely by encrypting their internet traffic. Data from Sensortower, an apps market research company, show the top eight VPN apps in Russia were downloaded almost 80 million times in Russia this year, despite the government’s efforts to crack down on their use.

The clampdown has forced many people to reconsider their future in Russia. According to official statistics published by the Russian government, more than half a million people left Russia in the first 10 months of the year – more than twice as many in the whole of 2021.

The true number might be much higher, as many would have likely left unofficially.

It is unclear how many have left for political reasons, but almost 50,000 Russian citizens requested asylum in another country in the first six months of the year, according to the UN refugee agency, UNHCR. That’s more than the annual figure for any of the past 20 years.

The US Border Patrol recorded 36,271 encounters with Russian citizens between October 2021 and September 2022. The number includes people who were apprehended or expelled by the border force and is significantly higher than the 13,240 and 5,946 recorded in the two previous fiscal years.

OK Russians, a non-profit helping Russian citizens fleeing persecution, said its surveys suggest those who are leaving are on average younger and more educated than the general Russian public.

“If you take the Moscow liberal intelligentsia, and of course, I’m talking only about the people I know and I know of, I would say that maybe 70% left. It’s journalists, it’s people from universities, sometimes schools, artists, people who have clubs and [foundations] in Moscow that got closed down,” Soldatov said.

The numbers that have left Russia pale in comparison to the more than 4.8 million Ukrainians who have registered as refugees across Europe because of the war, but the huge outflow of mostly educated people is having a significant impact on Russian society.

“If you are losing the educated middle-class portion of the population, then it matters for your economic prospects, but it also matters for the potential political reconstitution of the country,” said Kristine Berzina, a Russia expert at the German Marshall Fund of the United States. She pointed to the exodus of liberal, educated Iranians following the country’s 1979 revolution as an example of what can happen when large numbers from such demographics leave the country.

“You don’t need to have a fully radicalized population to be able to support a radical regime,” she said.

Maria only has one friend left in Moscow. Everybody else fled following President Vladimir Putin’s decision to launch an invasion into Ukraine.

“They all left right at the beginning of March,” she said. “[For them] it is impossible to live in a country that started a war.”

Maria has asked CNN not to publish her full name or details of her employer because of personal security concerns. The NGO for which Maria works is deemed a foreign agent under Russia’s recently expanded law on foreign agents, which means she is at risk of being persecuted.

“Everyone who is against the war saw their lives simply destroyed,” she told CNN. “We can’t complain now, because someone will immediately tell you – and quite reasonably so – that no one is interested in you right now. It’s Ukrainians who suffered the most. Of course, they are in much worse conditions now. But that doesn’t mean we’re okay.”

Maria said she remains determined to stay in Russia, even though all of her friends and her son have left. Her elderly mother can’t – and doesn’t want to – travel abroad, and Maria is not willing to leave her. “If I knew for sure that the borders would not be closed and I could come at any time if my mother needed my help, it would probably be easier for me to leave. But knowing that something else could happen at any moment scares me,” she told CNN.

She still believes her work is important, but said she is struggling to see any hope for the future. Like Olga, she described her own life as a perpetual cycle of panic, horror, shame and self-doubt.

“You’re constantly torn apart: Are you to blame? Did you not do enough? Can you do something else or not, and how should you act now?” she said. “There are no prospects. I’m an adult, and I didn’t exactly have all my life figured out, but all in all I understood what would happen next. Now nobody understands anything. People don’t even understand what will happen to them tomorrow.”

Soldatov said he had begun to question his own identity. “The things we held dear, like the memory of the Second World War, for instance, became completely compromised,” he said, referring to Putin’s baseless claim that Russian forces are “denazifying” Ukraine.

“It’s part of the Russian national identity that the Russian army helped to win the war (against Hitler’s Germany) and now it feels absolutely wrong because this message was used by Putin. You start questioning the history,” he said, adding that the favorable reaction by some parts of the Russian society to the invasion prompted him to research pre-war rhetoric in Germany.

Speaking about Russians as “us” had begun to feel wrong because he deeply disagreed with Russia’s actions, he said. But saying “Russians” didn’t seem right either. “Because of course, I’m Russian, I also have some partial responsibility for what is going on and I do not want to hide from it.”

Maria, a historian by training, has spent years taking part in anti-government protests, describing herself as a liberal deeply opposed to Putin, a former KGB agent. “I always knew that our country should not be led by a person from the KGB. It is too deeply rooted with horrors, deaths and all that,” she said.

She said that when the war broke out, she grew more worried about attending demonstrations and stopped when it became too dangerous. She doesn’t see a scenario under which the regime in Russia could be overthrown any time soon, she said, pointing out that all of the opposition leaders “are in jail or have been killed.”

Berzina said that the expectation of some in the West – that “once people start feeling as though their leaders are doing wrong, that there is an immediate wave of protests on the streets and call for government change that actually has an effect” – does not reflect the reality of life in Russia.

“The Putin regime has done a very good job of either forcing out or imprisoning all viable alternatives that are of the more democratic fashion and then on the other side you have fear of going out into the streets if there’s no clear path forward,” she said.

Olga, the woman who lives in Moscow and has regularly attended protests against the war, has also lost hope.

“Almost all opposition leaders and opinion leaders are now either in prison or abroad. People have a huge potential for political action, but there is no leader and no power base,” she said, adding that civilians will not come out against the armed police, the National Guard, and other security forces.

“It is probably difficult for people from democratic countries to understand the realities of life in a powerful autocracy,” she said. “It’s a terrifying feeling of one’s own insignificance and helplessness in front of a gigantic machine of death and madness.”