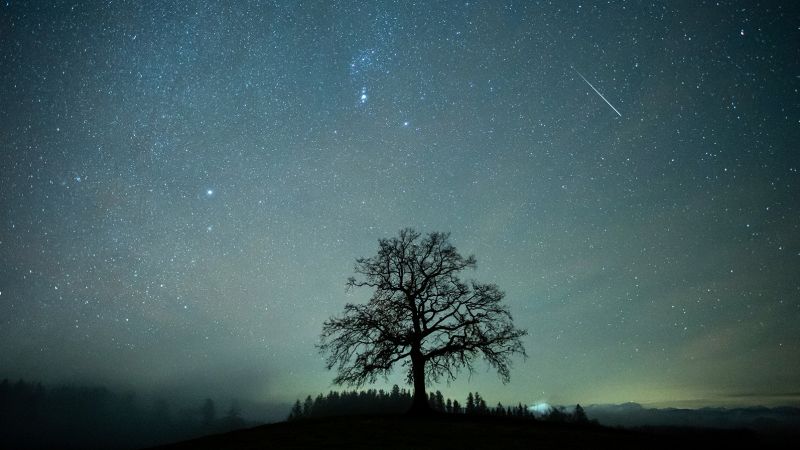 Sign up for CNN’s Wonder Theory science newsletter. Explore the universe with news on fascinating discoveries, scientific advancements and more.

The best chance to see the strongest meteor shower of the year is on its way this week.

The Geminids, known for bright, intensely colored meteors, have been streaking across the night sky since late November, and the shower will peak the night of December 13 through December 14, according to the American Meteor Society.

“If you had to pin one (meteor shower) as being the best of the year, year in and year out, it would be the Geminids,” said Robert Lunsford, fireball report coordinator for the society. “Normally, from let’s say the suburban area, under good conditions, you could probably see 30 to 40 meteors (an hour).”

With clear skies and no bright lights in the way, the Geminids can appear at a rate of about 120 visible meteors an hour, according to NASA. However, there is no escape from the big beacon in the sky that will obscure most of the fainter meteors this year: The moon will be shining at 72% fullness, according to the American Meteor Society.

“It is still going to be a good shower, even with the moon,” said Bill Cooke, lead of NASA’s Meteoroid Environment Office. “Find a decently dark sky, find something that will block the moon, maybe a building or a tree, and look away from the moon at the sky.”

First observed in the mid-1800s, the shower initially delivered only 20 visible meteors per hour at maximum. Since then, the Geminids have reappeared every year, growing stronger in numbers. By the 1960s, the event had surpassed the substantial August Perseids, once the stronger shower with hourly rates of 50 to 100 meteors.

It is unclear how the Geminids might change in the foreseeable future, Cooke said, with some models indicating the shower will increase in intensity and others estimating a gradual decline over the next few decades.

The Geminids are unique in that their source is the asteroid 3200 Phaethon, while most other meteor showers are born out of debris from icy comets. That’s why Geminids streams can be unpredictable — because it is more difficult to model asteroid breakups, Cooke said.

The asteroid 3200 Phaethon is unusual in its own right, behaving like a comet when it nears the sun. It also has an orbit, which it completes every 1.4 years or so, that’s closer to the sun than any other asteroid. When 3200 Phaethon is near Earth, the asteroid sheds its dusty debris, hence the Geminids display.

The Geminids are active from November 19 to December 24, according to EarthSky, but their hourly rates don’t start reaching double digits until December 10, Lunsford said.

The shower is known for being family friendly and a good one for young viewers in North America to observe since it’s the only major shower that exhibits the most activity before midnight. The meteors appear to radiate from the constellation Gemini, which will rise in the sky at around 10 p.m. ET, Lunsford said.

“You can observe when the radiant is at its highest, which is between 1 a.m. and 2 (a.m. ET) with moonlight, or you can try viewing earlier in the evening when the moon is still below the horizon,” Lunsford said. “The rates will probably be fairly similar at those times, too.”

The Geminids will be viewable from all parts of the world, but for the Southern Hemisphere, it is best to view toward the middle of the night at 2 a.m. local time, since the radiant will need to be at its highest to be seen. The position of the radiant will be low on the horizon and will also cause the meteors to appear at a reduced rate, Lunsford said.

According to NASA’s meteor camera data, the Geminids shower is among the best for production of fireballs, meteors that are brighter than the planet Venus, second only to the Perseids, Cooke said. The biggest and brightest Geminids meteors are often said to appear greenish in color.

The moon’s Illumination has affected Geminids watching for the past two years, but the meteor shower is expected to occur around a new moon in 2023, creating perfect viewing conditions.

“When you see a meteor burn up in Earth’s atmosphere, you’re seeing something that’s been out in space for a very long time,” Cooke said. “From a scientific perspective, by studying it, we can learn something about what makes up those comets. To the casual observer, they’re a nice firework (display) — meteor showers are nature’s fireworks.”

The next and final major annual meteor shower of 2022 will be the Ursids, which peak the evening of December 22, according to EarthSky.