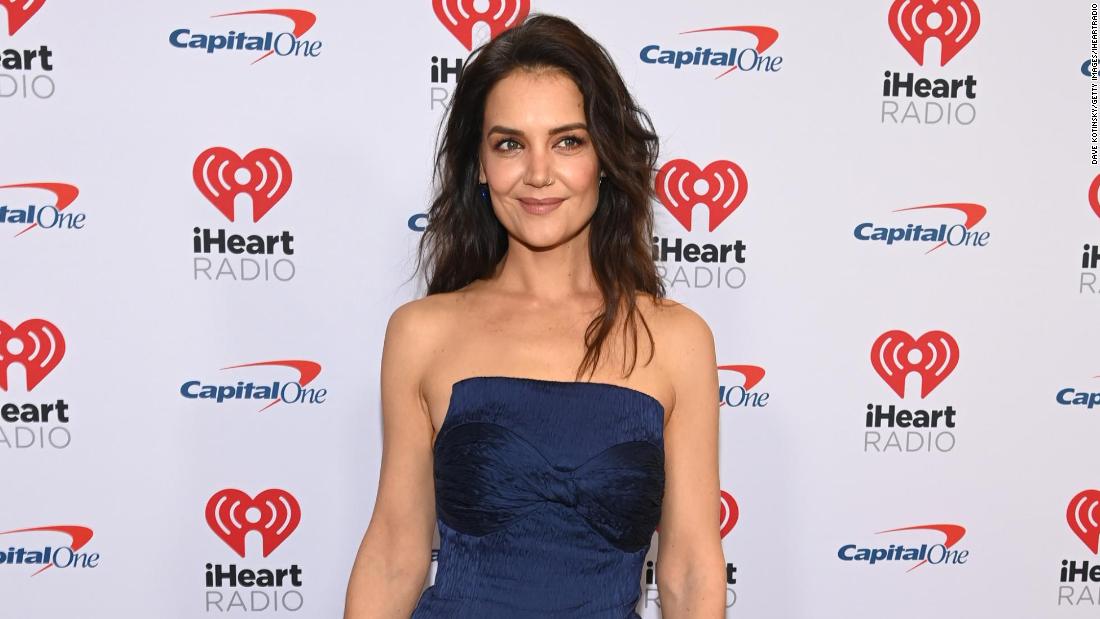 Featuring the good, the bad and the ugly, ‘Look of the Week‘ is a regular series dedicated to unpacking the most talked about outfit of the last seven days.

Walk into any Urban Outfitters, Zara or adjacent store today and you’ll be greeted by rows of cargo or “parachute” trousers á la Ciara circa 2006. Scroll through Pinterest, Instagram or TikTok and you’ll see Gen Z favorites like Dua Lipa, Olivia Rodrigo and influencer Matilda Djerf flaunting flamboyant sequin butterfly tops like they’ve only just waved goodbye to 1999. But at the iHeartRadio Jingle Bell red carpet in New York last Sunday, when Katie Holmes stepped out in true Y2K style in a royal blue Tove mini dress styled over raw-hemmed jeans and black New Balance trainers, her look went viral for all the wrong reasons.

Most notably worn by the likes of Rachel Bilson, Ashley Tisdale, Zoe Saldana and even Jessica Alba, dresses paired with jeans were a staple of early 2000s red carpets. From pleated mini dresses to bohemian, halter-neck smocks, the trend welcomed all styles, colors and fit. But in the years since, the combination has widely been considered a fashion faux pas — it’s one foot in, one foot out energy often misconstrued as non-committal, or evidence of a type of casual dressing that appears too curated. But the formula, classical femininity counterbalanced by something low-key and androgynous, is the basis of many trends dominating our social feeds today (think an oversized blazer shrugged over a vintage satin nightdress, or billowing low-waisted slacks paired with a cinched corset top).

Holmes was met with spirited headlines asking “if it was 2002,” while descriptions of the aughts-inspired look ranged from “wild” to “too much.” The internet, as always, was more direct, with one Twitter user calling the ensemble “cursed” and another joking that she should face a prison sentence for her sartorial gall. The outfit even provoked an official response from Holmes’ stylist, Brie Welch, in an attempt to manage the PR fall-out. “We decided the rich color and subtle bustier effect detailing of the top was elegant and would be fun if paired with jeans, creating a more youthful feel for Jingle Ball and the atmosphere there,” Welch told the New York Times, adding supportively that Holmes is “more than capable of looking cool in an unintentional trend 20 years later.”

The real question is not so much whether Holmes’s outfit looked good, but rather who the gatekeepers of this era of fashion are? How do we collectively decide what fashion history relics to resuscitate, and which to leave dead and buried? Because if any period of dressing requires a pinch of salt and an open mind, it’s the Y2K renaissance. Dubious comebacks include the fluffy bucket hat, beloved by Megan Fox; pedal pushers, as seen on Emily Ratajkowski; ties worn as necklaces (and without collared shirts, according to Miley Cyrus); and punny slogan tees, like those spotted on Addison Rae, just to mention a few — though none have faced the backlash of Holmes.

But the union between dresses and jeans, as unholy as some might perceive it, is here to stay. On the runway last season for Spring-Summer 2022, British designer Molly Goddard styled her terrific tulle creations with a pair of mid-wash baggy jeans. For his New York Fashion Week debut this past September, menswear designer Peter Do layered mid-length pleated skirts over slacks, and London-based label Chopova Lowena styled its cult favorite skirt over printed trousers for Spring-Summer 2023. While it may sting for Holmes now, as the old saying goes: “You’re only crazy until it works, then you’re a genius.”