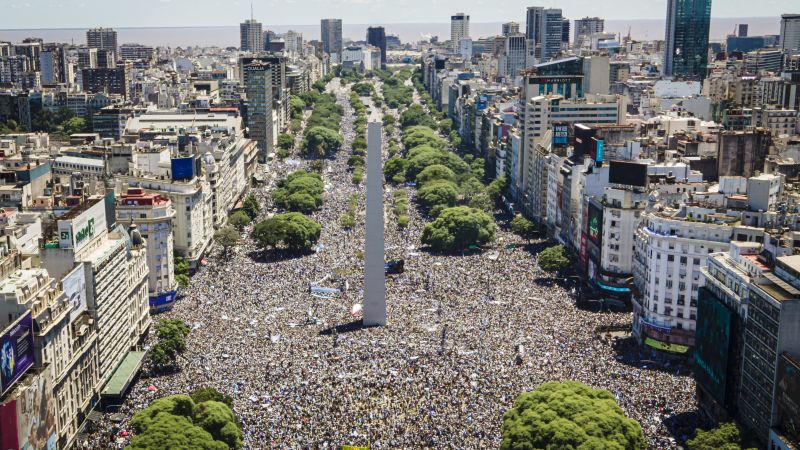 Argentine national soccer team stars Lionel Messi and Rodrigo De Paul, along with coach Lionel Scaloni, were forced to fly in a helicopter over the center of Buenos Aires after their bus got stuck in the massive crowds gathered to watch the parade celebrating the country’s World Cup victory, Argentine federal police said on Tuesday.

A bus carrying the entire team departed from the Argentine Football Association’s (AFA) headquarters and was set to head to the Obelisk, a historic monument in the capital.

However, the bus was not able to progress due to crowds gathered on the streets, Claudio ‘Chiqui’ Tapia, the president of the Argentine Football Association said on Tuesday.

“They won’t let us go to greet all the people who were at the Obelisk, the same security agencies that escorted us, won’t allow us to move forward,” Tapia said.

“A thousand apologies on behalf of all the champion players.”

The players were flown over the Obelisk and other areas and then flown back to the AFA training site in Ezeiza, outside of Buenos Aires, police said.

According to Argentine outlet InfoFunes, Messi and Ángel Di María flew back to their districts in their native city of Rosario, Sante Fe province, by helicopter after arriving by plane to Rosario’s local airport.

Messi eventually arrived at his house by car to be greeted by a huge crowd of fans celebrating his triumphant return, chanting “Dale Campeón, Dale Campeón” – “Let’s go champion.”

Fellow Santa Fe natives Scaloni and forward Ángel Correa also flew back, but InfoFunes reported this was via a late airplane flight.

Tuesday had been declared a national holiday in Argentina following the team’s thrilling penalty shootout victory over France in Qatar on Sunday.

Superstars Messi and Kylian Mbappé faced off on the pitch, in what has widely been called the greatest World Cup final of all time.

Mbappé was defending France’s 2018 win at the tournament in Russia, while 35-year-old Messi was playing in what may be his final World Cup match, looking to claim the trophy which had eluded him for so long.

Argentina took an early lead in the first half through a Messi penalty and a wonderful counterattacking goal from Di Maria, before France roared back in the second half with two Mbappé goals that forced the match into extra time.

Messi scored his second goal of the match to restore his team’s lead – but Mbappé netted a second penalty to grab his hat-trick and take the final to a penalty shootout, which ended with triumph for Argentina after France missed two of its spot kicks.