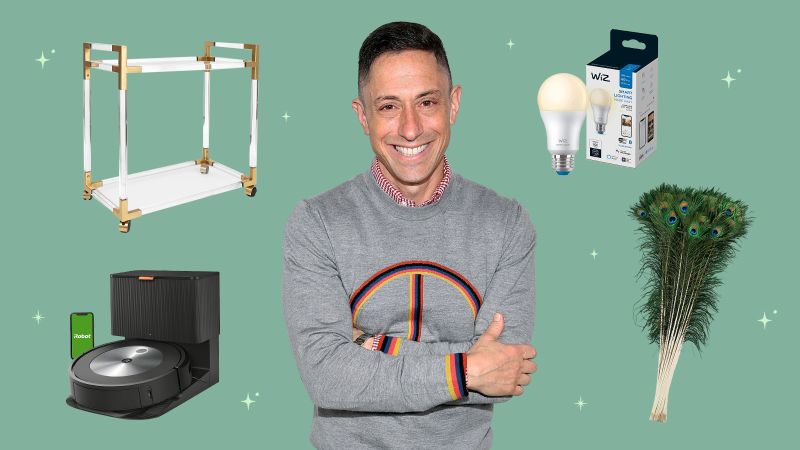 When it comes to your home decor, famed interior designer and potter Jonathan Adler says that anything goes, as long as it suits your taste. “There are no rules,” he says. “If you love it, it will work.” After a beat, he retracts that statement. “Actually, I lied — I do have one rule. Always buy a chandelier that is bigger than you think you need, and more expensive that you think you can afford. Any time I’ve skimped on lighting, I’ve lived to regret it.” (If you’re looking for bold lighting inspo, he says his own Globo-Six Light Linear Chandelier is a good place to start!)

However, when it comes to the rest of his life and career, Adler has no regrets. He initially thought he’d follow in his father’s footsteps and become a lawyer, which he studied at Brown University. But he never could shake his love of pottery, and in 1993 began selling some of his one-of-a-kind pieces to Manhattan’s high-end department store Barney’s. He later turned to designing pillows,throws and rugs, and developed such a huge fanbase that he was able to open his own standalone store in Soho in 1998.

His success also led to a career in interior design, and today he has 11 brick-and-mortar Jonathan Adler stores around the world, including a brand new flagship shop in New York City. Below, he shares a few of his other favorite design essentials — plus, some tips for successful dinner party hosting this holiday season.

When it comes to what to put in one of his handmade vases, the designer deviates from the norm. “Flowers are so yesterday!” he says. “Instead, show your design bona fides with feathers.” He says the natural design of peacock feathers instantly draws the eye to them. “There are few decorating fails that a festoon of feathers won’t fix.”

Take it down a notch! When it comes to lighting, that is. When it comes to design, he’s a fan of more-is-more, and pattern mixing. “Put all of your lighting on dimmers,” Adler says. “You and your guests will look younger and richer than you really are.” He realizes that’s not always feasible, especially with rental apartments. “Don’t have dimmers? Get these smart bulbs to adjust the lighting wirelessly.”

The secret to a great-looking home is keeping it tidy! Adler is a fan of keeping his floors clean with minimal work involved. “If cleanliness is next to godliness, then a Roomba is heaven-sent,” he says of the beloved smart vacuum, which empties itself for up to 60 days and avoids items like cords and pet waste, which is why we also named it the best vacuum of the year.

• Related: The best robot vacs of the year

If you’re going to entertain, Adler says this is a must-have for the home. “I implore you to get a bar cart, especially for the holidays,” he says. “It’s a party on wheels, and says you’re louche and know how to entertain.” His favorite option is of his own design. “Our Jacques Bar Cart, which is made of luxe clear acrylic, brushed accents, and two glass shelves is perfect for your chosen aperitifs and accoutrement. It’s a real ‘bar cart’s bar cart.’”

Adler loves a good book — and this brand new release, written by his husband Simon Doonan, tells the history of Lou Reed’s 1972 album “Transformer,” and the impact its songs had on the LGBTQ community. Plus, it looks good on the bookshelf! “I’m a fan of scaping in all its forms – pillowscaping, tablescaping, bedscaping and, of course, shelfscaping,” he says, or artfully arranging his decor. “My shelves are filled with books by my shorter half, Simon Doonan, and his newest book about Lou Reed is genius (and I swear I’m not biased!).

How does Adler keep up with his busy career? He gets by with a little help from what’s inside his mug. “I’m a highly caffeinated person and have about a billion cups of PG Tips tea a day,” he says. “I should probably seek treatment for my addiction, but I love that it’s the strongest tea you can get.”