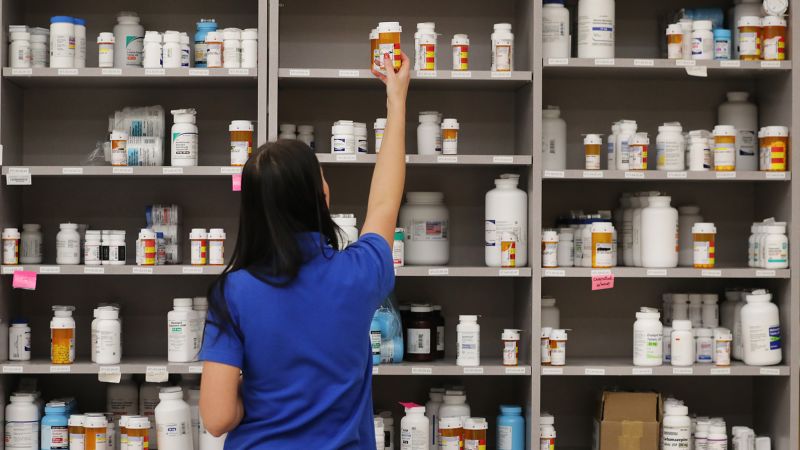 Scarcity of several high-profile prescription drugs, such as the antibiotic amoxicillin and the ADHD treatment Adderall, have had some patients searching pharmacies and rationing pills, and now parents in some areas are having to hunt to find over-the-counter pain- and fever-reducing medications for their sick kids.

So what’s going with the availability of medications in the United States?

Nothing too unusual, experts say. Even when demand is not sky-high, drugs shortages happen regularly – but usually more quietly – in the US.

Shortages “hit a lot of different patient populations with different drugs and whatnot, but many of those don’t get a lot of headline news because they’re very niche,” said David Margraf, a pharmaceutical research scientist with the Resilient Drug Supply Project at the University of Minnesota’s Center for Infectious Disease Research and Policy.

At any time, the reasons why shelves may be empty vary from place to place and from drug to drug. Each shortage has its own particular factors.

“They’re all a different tale,” Margraf said. “There’s commonalities between them, but each one is a little bit different and it’s very tedious trying to figure out what’s going on sometimes.”

Some drugs are generally more vulnerable to shortage due to a lack of economic incentives to produce them.

Sometimes, manufacturing disruptions, labor issues or ingredient shortages will reduce availability. While the US is a major developer of new medications for the world, it is also heavily dependent on other countries for the manufacturing of those drugs.

Many of the raw ingredients that go in to making drugs are sourced from just two countries, China and India, says Bindiya Vakil, chief executive officer of Resilinc, a company that maps and monitors pharmaceutical supply chains with the aim of giving an early warning to clients when trouble is on the way. Any disruption in China or India, such as work stoppage at a factory due to China’s strict zero Covid policy, which was only recently eased, may have a ripple effect on the supplies of many products, including medications.

Even with normal levels of production, high demand during a tough cold and flu season – like the one the US is experiencing – can make it hard for families to find what they’re looking for.

Whitney Hemsath, a writer and mother of four living in the Twin Cities area of Minnesota, said she has been noticing how little children’s medication has been on store shelves for a few weeks, but she wasn’t too worried since the family still had some at home.

Last week, though, her 4-year-old woke up in the middle of the night with a painful ear infection, and she got an unpleasant surprise: They were out of pain medication.

She started looking for a store that was open at 5:30 a.m., and found one with three bottles of children’s acetaminophen left. There was no ibuprofen, which lasts longer, and no generics or store brands. While she was grateful to find something, she says the family is on a tight budget while her husband finishes his Ph.D., so paying for the brand name medicine was frustrating.

Later that day, their pediatrician confirmed the ear infection and prescribed the antibiotic amoxicillin. He called the prescription into a chain pharmacy, but gave her a written copy, too, in case it was difficult to find. Sure enough, the first pharmacy was out, and so was the next. Based on the pharmacist’s list, she called her doctor to change her son’s prescription – but the pharmacy didn’t take their Medicaid insurance and the alternative medication was too expensive.

Finally, she was able to find another chain pharmacy that had amoxicillin and took their insurance.

Her son is doing better now, and she said she feels bad complaining because she was lucky to find what she needed – but it took time and effort she wasn’t used to.

“It never used to be like this,” she said. “There were always so many options and well stocked shelves before … now you’re lucky if they have one type of any brand of the medicine that you want.

“The security of knowing I can go to the store or doctor and get my kids the medicine they need is gone,” she said. “It’s been replaced by this ever-present worry that the shelves might be empty.”

Right now, pain and fever medications for children, especially liquid formulations, are in short supply in some places because of a trio of viral illnesses – flu, RSV and Covid-19 – hitting the United States at the same time, creating unprecedented demand. Many pediatricians say they can’t remember ever seeing so many kids this sick at the same time.

Bare shelves in some stores may seem reminiscent of this year’s baby formula shortage, but the situations aren’t quite the same. With formula, a major manufacturer recalled products and shut down one of its factories and conducted a nationwide recall after the government found quality problems at the production facility, taking it offline for months. The shutdown exacerbated existing supply chain problems, leaving shelves empty.

With children’s medications, drug manufacturers say they are running full-tilt, and they planned for some increase in sales over the winter months. But they didn’t know it would be this bad or start this early.

According to the Consumer Healthcare Products Association, which represents producers of over-the-counter medications, major US manufacturers of children’s medications – including Perrigo in Michigan and Johnson & Johnson in Pennsylvania – are “operating facilities 24 hours a day, 7 days a week” to keep up.

The US Food and Drug Administration also says it is keeping a close eye on the situation and “talking daily” with manufacturers to find ways to increase supply.

“The ibuprofen and acetaminophen and children’s formulations, we’re monitoring those really closely at this time,” said an FDA official who spoke to CNN on the condition of anonymity because they were not authorized to share details of the agency’s work.

“There are not any manufacturing problems, so there’s not anything that’s slowing production down or causing these shortages as far as manufacturing. In fact, manufacturers are working very closely with us and increasing supply so that we can get the demand where the priority needs to be,” the official said.

The official said the FDA is able to help increase supply by identifying new sources of raw materials to facilitate additional production. The agency can also assist with identifying additional manufacturing sites and “expediting review of anything related to increase in production.”

The official would not confirm details of specific requests from the companies for help. “I can say they are picking up on those offers, and they’re working very closely with us,” the official said.

In the United States, there are groups tracking and watching shortages and potential shortages.

The American Society of Health-Systems Pharmacists, a nonprofit representing pharmacists that work in hospitals, tracks drug shortages in the US by taking reports of shortages from anyone and then checking with manufacturers to verify them. It defines drug shortages as supply issues that affect how a pharmacy prepares or dispenses a drug product or influences patient care if providers have to seek an alternative.

The FDA tracks drug shortages too, taking reports directly from manufacturers, but it defines them differently than the pharmacists’ group. The agency considers a drug to be in shortage when the total supply of all versions of a commercially available product cannot meet the current demand and a registered alternative manufacturer will not meet the current or projected demands, leaving patients in a lurch.

The FDA says that by its count, the number of drugs reported in shortage has actually fallen from a high of 251 in 2011. There were 41 drug shortages tracked by the FDA in 2021, for example. That same year, the agency says, it averted 317 shortages.

In a 2019 report, a task force commissioned by the FDA acknowledged that drug shortages are a “persistent problem” and that when they happen, they can be tough to remedy. In some cases, they can last years.

Adderall, for example, saw a sharp increase in demand from 2020 to 2021. At the same time, Teva, a leading manufacturer, reported delays due to worker shortages. The company has told CNN the worker shortage has been resolved.

Because Adderall is a controlled substance, it is tightly regulated by the government. The Drug Enforcement Administration limits how much can be produced to avoid patient abuse.

All this means Adderall is likely to remain in shortage into 2023, says University of Minnesota’s Margraf.

Most of the drugs that seem to disappear are inexpensive generics given by injection. These “sterile injectables” have stringent manufacturing requirements that make them costly to produce, and they have slimmer profit margins, so there’s less economic incentive for companies to make them.

Other generics – like many antibiotics – are vulnerable to shortages, too. Experts say that’s what happened recently to some formulations of amoxicillin.

Companies produce generic drugs to order. They don’t keep stocks on shelves in a warehouse. Some manufacturers say this year’s orders didn’t anticipate the high demand. Even when companies realize there’s a shortfall, it may take weeks or months for them to make and ship more product.

“Really, it comes down to economics,” said Vimala Raghavendran, senior director of the Pharmaceutical Supply Chain Center at the U.S. Pharmacopeia, a nonprofit that at sets quality standards for dietary supplements, food and medications.

For the past three years, USP has been tracking pharmaceutical supply chains through its Medicine Supply Map in order to help identify and head off potential shortages.

“Antibiotics are 42% more likely to be in shortage compared to other classes of drugs. They have lower price points, so there’s less incentive for manufacturers to invest in excess capacity,” Raghavendran said.

“And then you throw in an unexpected shock, like a demand increase because of the surge in RSV and the flu and Covid, and the supply chain is not able to absorb that shock,” she added.

There are some systems in place to stay ahead of shortages. The FDA requires manufacturers to notify it if there is anything that would disrupt the manufacturing or supply of a drug, and in many cases, that allows the agency to head off problems.

However, companies are not currently required to notify the FDA of increased demand.

“But that’s something we’re really encouraging companies to do, let us know if there’s a spike in demand so that we can work with them early on, just as they can with supply disruptions,” the official told CNN.

The White House says drug shortages are a priority for President Biden’s administration, too.

It points to Biden’s Executive Order on America’s Supply Chains, signed in February 2021, which directed the secretary of the Department of Health and Human Services to identify and report risks in the supply chain for pharmaceuticals and their active ingredients and to make recommendations to address those risks.

“HHS, for the first time in its history, has established a new dedicated public health industrial base expansion and supply chain management office, with the goal of building resilience,” White House spokesperson Kevin Munoz wrote in an email to CNN.