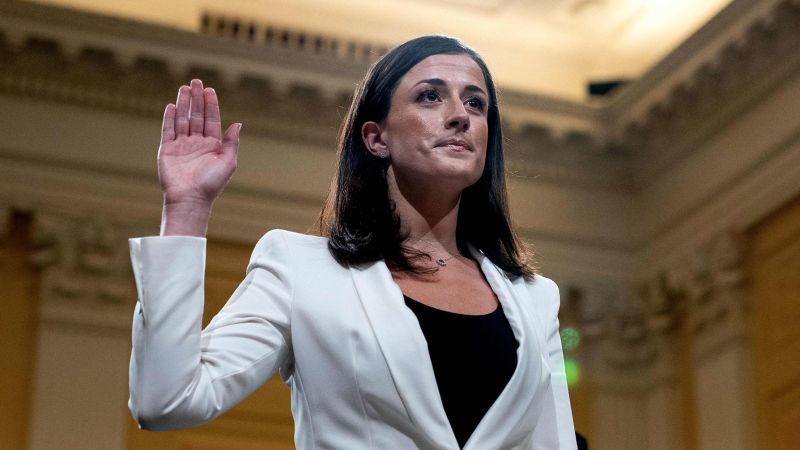 The January 6 committee released another batch of transcripts Tuesday, including two more of its interviews with blockbuster witness Cassidy Hutchinson and testimony from several other Trump White House officials.

The latest batch reveals new details about Hutchinson’s dueling loyalties that led her to ultimately switch lawyers and provide damning testimony about what she saw and heard at the White House after the 2020 election.

One of the transcripts released Tuesday was her final deposition with her initial, Trump-funded lawyer, Stefan Passantino, which was conducted on May 17. She soon hired a new attorney, Jody Hunt, and sat for another deposition on June 20, a transcript of which was also released Tuesday. That was just eight days before she delivered surprise testimony at the January 6 committee’s sixth public hearing.

The latest cache of transcripts also revealed some of the rumors, gossip and wild conspiracies that were floating around the White House – including conversations about QAnon conspiracies – while then-President Donald Trump refused to concede and tried to overturn the election results.

The new batch of transcripts show the deepening divide between Hutchinson, , the former aide to Trump White House chief of staff Mark Meadows, and Passantino just weeks before she hired hew new lawyer. The two bicker several times, according to the transcript of her May deposition, and Passantino cut off Hutchinson on a few occasions, interrupting her with warnings about her testimony, and sometimes trying to finesse what she said.

To be sure, Passantino told Hutchinson during the deposition that he was not trying “to shape what you’re saying at all,” according to the transcript. Passantino has denied any wrongdoing and said he represented her “honorably” and “ethically.”

The May interview began with questions about whether Trump agreed with some rioters’ chants calling for the hanging of then-Vice President Mike Pence.

She went on to testify that she overheard Meadows say Trump thought “maybe perhaps the chants were justified.” This detail ended up being one of the most damning things to emerge from her testimony and was featured prominently at the panel’s public hearings.

When Hutchinson continued testifying about Trump’s alleged reaction to the chants, Passantino jumped in again.

“I don’t want to interrupt, nor do I want to shape what you’re saying at all here,” he said, before offering a different take on Trump’s reaction to the anti-Pence chants. He told the lawmakers that he believed “the President said perhaps they’re right” as opposed to expressing a clear, affirmative view that Pence should be executed, according to the transcripts.

After Hutchinson parted ways with Passantino, her new attorney told the January 6 committee during her June deposition that she needed to clarify and “correct” some of her previous testimony, according to the newly released transcript.

Hunt, the new lawyer, told the committee that Hutchinson had things she would like to clarify, to provide context for and “in some respects, to correct” from her previous testimony.

“She wants to be clear about it,” Hunt said, thanking the committee for the opportunity to address Hutchinson’s previous testimony.

Hutchinson walked the committee through the transcripts of her first two interviews in order to clarify and elaborate on a number of things she had said.

She went on to provide a significant amount of new and damning testimony about Trump’s actions on January 6, 2021.

Meadows told White House staffers to keep some Oval Office meetings “close hold” during the transition period, potentially leaving meetings off the books, according to one of the Hutchinson transcripts.

Hutchinson also testified that there “were certain things that had potentially been left off” the Oval Office diary.

Hutchinson said she recalled Meadows having a meeting at the end of November or early December 2020 in which he told outer Oval Office staffers: “Let’s keep some meetings close hold. We will talk about what that means, but for now we will keep things real tight and private so things don’t start to leak out.”

She testified that she couldn’t recall whether there was specific information Meadows wanted to keep “close hold.” She said she was not aware of any explicit directions that Meadows gave to keep January 6 information “close hold.”

Additionally, she told the committee that she saw Meadows burn documents in his office fireplace around a dozen times – about once or twice a week – between December 2020 and mid-January 2021.

On several occasions, Hutchinson said, she was in Meadows’ office when he threw documents into the fireplace after a meeting. At least twice, the burning came after meetings with GOP Rep. Scott Perry, a Pennsylvania Republican, who has been linked to the efforts to use the Justice Department to overturn the 2020 election. Politico has previously reported that Meadows allegedly burned documents after meeting with Perry.

In her June interview – the fourth she had conducted with the panel – Hutchinson described a discussion about QAnon during a December 2020 meeting with Meadows, then-President Trump and Republican members of Congress, including Georgia GOP Rep. Marjorie Taylor Greene.

“I remember Marjorie Taylor Greene bringing QAnon up several times, though, in the presence of the president, privately with Mark,” Hutchinson testified. “I remember Mark having a few conversations, too, about – more specific to QAnon stuff and more about the idea that they had with the election and, you know, not as much pertaining to the planning of the January 6th rally.”

In her May interview, Hutchinson said she also remembered Greene bringing up QAnon while Trump was in Georgia for a rally on January 4, 2021.

“Ms. Greene came up and began talking to us about QAnon and QAnon going to the rally, and she had a lot of constituents that are QAnon, and they’ll all be there,” Hutchinson said. “And she was showing him pictures of them traveling up to Washington, D.C., for the rally on the 6th.”

Hutchinson also testified that Trump aide Peter Navarro would bring her materials about the election to pass along to Meadows. “And at one point I had sarcastically said, ‘Oh, is this from your QAnon friends, Peter?’ Because Peter would talk to me frequently about his QAnon friends,” Hutchinson testified.

“He said, ‘Have you looked into it yet, Cass? I think they point out a lot of good ideas. You really need to read this. Make sure the chief sees it,’” she continued.

Rep. Liz Cheney, the panel’s top Republican, asked Hutchinson whether Navarro was being sarcastic about his QAnon friends.

“I did not take it as sarcasm,” Hutchinson said. “Throughout my tenure working for the chief of staff, he would frequently bring in memos and PowerPoints on various policy proposals that – he would then expand on, you know, ‘Q is saying this.’”

Former Trump White House deputy press secretary Judd Deere testified to the January 6 committee that he heard “gossip” from his colleagues during the week after the 2020 election that Trump was considering conceding and inviting the Bidens to the White House.

“In the week after the election, there was gossip around the building that he was considering conceding,” he told the panel, according to a transcript of his testimony that was released Tuesday.

Deere said Trump was “even strongly considering inviting the President-elect and the incoming First Lady to the White House.”

He added, “Being the Deputy Press Secretary in charge of ensuring that the protected press pool always has access to him… I was very inclined to hear more about if the President-elect and the incoming First Lady would be making a visit.”

Congressional investigators pressed Deere to reveal where he heard the rumors, but he said he could not remember. Obviously, Trump did not concede to Biden and instead tried to overturn the election results, leading to the violent storming of the US Capitol on January 6.