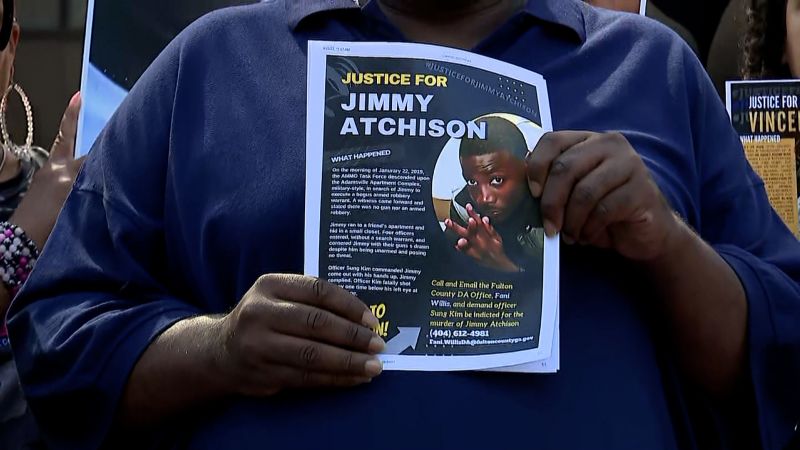 For more than three years, Jimmy Hill has kept a weekly vigil outside the offices of the Fulton County district attorney in Atlanta, distributing fliers about his son’s death at the hands of police and demanding justice.

This week, former Atlanta police officer Sung Kim was indicted on charges of felony murder, involuntary manslaughter and violation of oath by public officer in connection with the shooting death of 21-year-old Jimmy Atchison in January 2019, according to Jeff DiSantis, a spokesman for the DA’s office.

It’s not clear if Kim, who retired from the Atlanta Police Department, has an attorney.

“Oh man, it hasn’t hit me yet,” Hill said over the phone Friday night.

The case had languished amidst a backlog of thousands of cases in Fulton County caused in part by the Covid-19 pandemic, CNN previously reported.

“It’ll hit me in a minute,” Hill said. “I’m relieved but we still have a lot more to fight.”

Hill, 60, said he learned of the grand jury indictment from his attorney earlier Friday. His family expects to hold a news conference with the members of the NAACP and their attorney on Monday.

Atchison was shot and killed on January 22, 2019, by the Atlanta police officer. Atchison was unarmed when he was shot in the face after a foot chase.

An investigation by the previous administration at the Fulton County DA’s office found the shooting to be unjustified and recommended the officer who killed Atchison be charged with felony murder.

The officer has said he believed Atchison was armed but investigators later confirmed he was not, the Atlanta Journal-Constitution previously reported.

Officers were pursuing Atchison at an apartment complex while trying to arrest him on a warrant.

Georgia NAACP Chapter President Gerald Griggs said he received a letter from the DA’s office in April stating there was a backlog of 11,000 cases – attributable in part to the pandemic – plus an estimated 55,000 cases that were not properly closed by the previous administration, CNN has reported.

In recent years other families whose children have been killed by police have joined Hill at the weekly demonstrations, holding posters with photos and information about the cases.

“Some of these families are barely holding on to their sanity,” Hill told CNN in October. “People don’t understand what police brutality does to the family and the community. It challenges your mental health.”