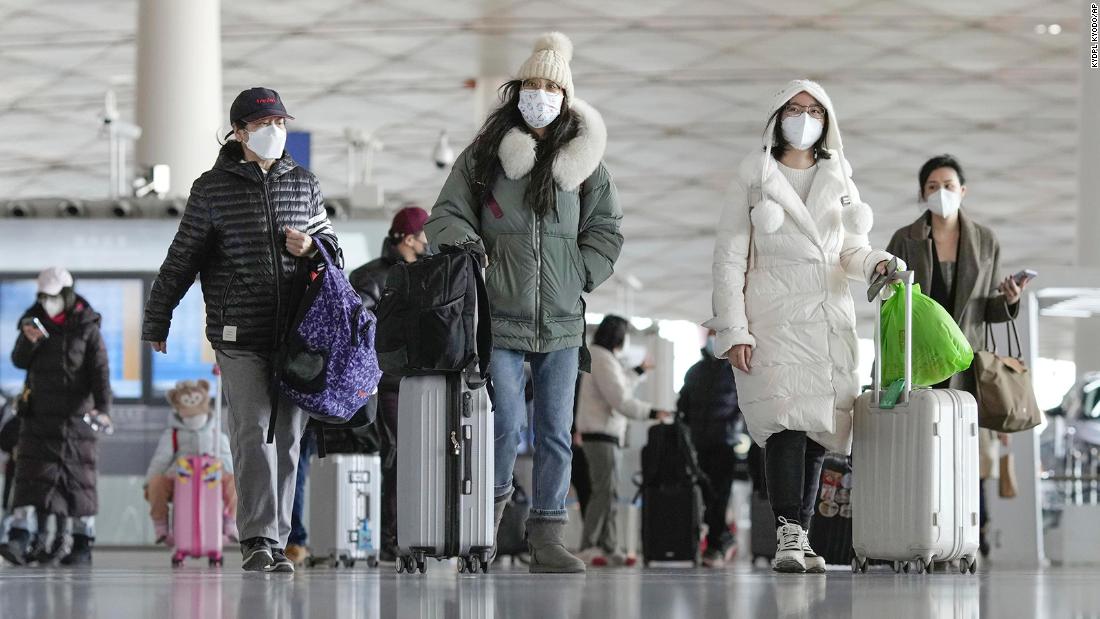 Hong Kong (CNN) — China’s partial reopening has been met with an outpouring of joy and relief from citizens — both the hundreds of millions isolated inside the country for the past three years and those overseas separated from their loved ones.

Authorities announced Monday that starting January 8, China will drop quarantine requirements for all international arrivals, its most significant move yet in transitioning away from its stringent zero-Covid policy.

The border remains largely closed to foreigners, apart from a limited number of business or family visits — though the government signaled Monday this could loosen, too.

For many Chinese nationals abroad, who have been unable to return or unwilling to endure the lengthy quarantine, the news meant they could finally go home — a bittersweet victory after much sacrifice.

“Finally, everybody can (live) their normal life,” said one Chinese national living in New York, who hasn’t been home for four years. She called the separation “very painful,” saying several of her family members and the beloved pet dog she grew up with had died during that time.

Her family “missed (my graduation). They missed so many things,” she said. “And I also missed so many things for my family. All my friends, they got married during the pandemic. Even some of them had babies. I feel like I missed everything, I missed the most important points in their lives.”

May Ma, 28, has been unable to go home for nearly three years while living in South Korea. The worst thing about the quarantine requirements had been worrying about her grandparents’ health, and not knowing if she’d be able to return in time to say goodbye if anything were to happen, she said.

Throughout the pandemic, “the scariest thing was … not knowing where the end is, not knowing when I can go back,” she said. “I definitely feel very happy, I can finally see the end.”

Those within China are also celebrating and anticipating outbound travel. Most have not left the country for several years and are now flooding booking sites to plan long-awaited vacations.

Online searches for outbound flights and overseas hotels jumped to a three-year peak on Trip.com, a Chinese travel booking website, according to company data. Searches for popular destinations increased tenfold within half an hour of the announcement, with many people searching for outbound group tours during the Lunar New Year holiday season in late January, data shows.

Macao, Hong Kong, Japan, Thailand, South Korea, the United States and the United Kingdom were among the website’s top 10 destinations with the fastest growth in search volume since the announcement.

But the border relaxations have sparked concern among some as China fights its most severe wave of Covid infections since the pandemic began.

Morgues and crematoriums in China are overflowed as Covid rages through the country despite no reporting on new Covid deaths. CNN’s Selina Wang is in Beijing with the story.

Cases have skyrocketed since China abandoned zero-Covid, with empty streets and packed hospital wards. When CNN visited a Beijing crematorium last week, cars lined up to enter, filled with grieving family members who had been waiting more than a day to cremate loved ones who died of Covid.
Last Friday, Bloomberg News and the Financial Times reported that almost 250 million people in China may have caught Covid in the first 20 days of December, a figure presented during an internal meeting of China’s National Health Commission, according to both outlets. They cited sources familiar with the matter or involved in the discussions.

If correct, the estimate — which CNN cannot independently confirm — would account for roughly 18% of China’s 1.4 billion people and represent the largest Covid-19 outbreak to date globally.

“I feel like right now, it’s totally a mess,” said the Chinese national in New York. “Everybody is sick. So, at least I think right now, it’s not the best time to visit my family. Maybe two or three months later.”

Some overseas destinations are also on guard. Officials in Italy’s northern Lombardy region have asked Milan’s Malpensa airport — one of the country’s largest international airports — to conduct PCR tests for all arrivals from China from now until the end of January.

India, which borders China, has ordered travelers from China and several other countries to show proof of a negative Covid test on arrival. And Japan announced Friday that travelers from mainland China, or who had been in China within a week, would be tested for Covid upon entry. In both India and Japan, those found positive upon arrival will be required to quarantine.

But for many Chinese nationals, hungry for travel and reunion, the overwhelming emotion remains relief.

“It doesn’t matter if I can get back in time for Spring Festival,” said Ma in South Korea, referring to Lunar New Year. “There is hope after all, I can bear waiting for a little while longer.”