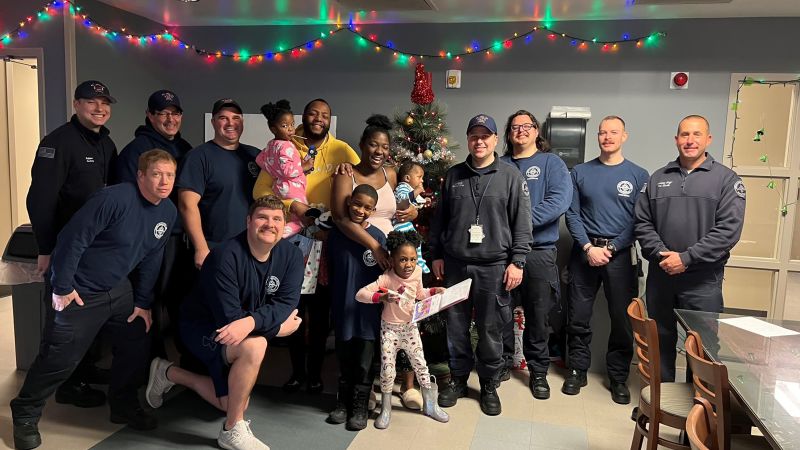 When the blizzard first hit Buffalo, New York, a family of six packed up their bags and headed to a local hotel after they lost power at their home – but they ended up celebrating Christmas somewhere a little more surprising.

Demetrice and Danielle, along with their children Aayden, 8, Aubree, 4, Jordynn, 2, and 9-month-old Judah became one of the many motorists who got stuck in impassable road conditions in Buffalo on Friday, according to a Niagara Frontier Transportation Authority statement.

The family was rescued by Buffalo Airport Fire Fighters, along with 36 other people who were also caught in blizzard conditions, according to the transportation authority statement.

As the only rescued motorists with young children, the family got to spend Christmas Eve and Christmas Day somewhere special: at the firehouse with the firefighters.

Their oldest, Aayden, asked the firefighters if he could wear a firefighter uniform with them and was given a uniform and department T-shirt and learned about how the first responders dispatch, according to the transportation authority.

The 8-year-old was also thrilled that Santa Claus would be delivering presents to them at the firehouse.

“Christmas became a big concern because Aayden was so excited that Santa would know he was here and he would get to celebrate at a real firehouse and we didn’t want to disappoint,” said Assistant Chief Buffalo Airport Fire Department Joel Eberth. “We were able to find several items in the firehouse to wrap for the family and with the amazing help from the field office delivering some items from the terminal, we were able to make sure Santa paid a visit.”

“It was an amazing experience for our firefighters and it definitely made us better people,” Eberth said.

Buffalo has been hard hit by the winter storm sweeping the country. As of Sunday morning, 43 inches of snow had fallen there, according to the National Weather Service.