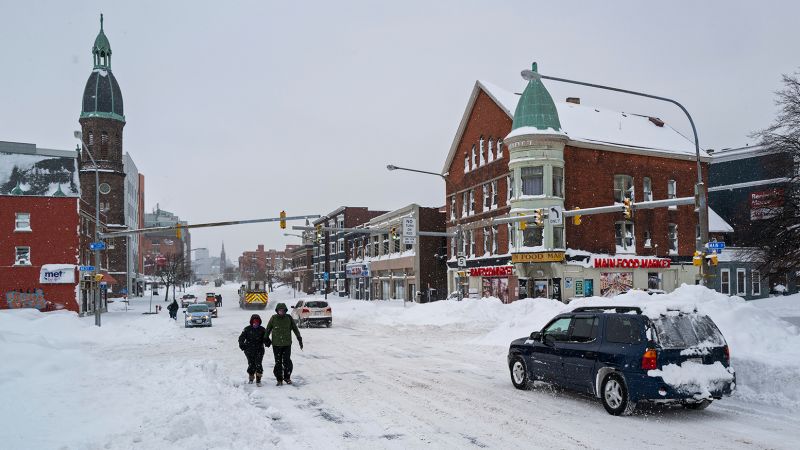 Days into a deadly winter storm that bedeviled much of the US with freezing temperatures and heavy snowfall, officials in Buffalo, New York, are focused on life-safety measures, plowing through thick snow to get to stranded drivers and to make way for emergency services.

At least 27 people have died as a result of the storm in New York’s Erie County – many of them in Buffalo, which was buried by up to 43 inches of snow and slammed with fierce blizzard conditions that made for blinding drives over the Christmas weekend.

The storm has drawn comparisons to Buffalo’s famous blizzard of 1977 – a powerful storm that left 23 people dead.

This storm, however, was more ferocious than the blizzard of 1977, Erie County executive Mark Poloncarz said. “It was just horrendous, and it was horrendous for 24 hours in a row.”

Even emergency and recovery vehicles sent out to help have gotten stuck in the snow. Poloncarz said Buffalo was left “impassable in most areas.”

“Buffalo Police have provided hundreds of rescues and have rescued many stranded motorists in the city of Buffalo,” Brown said. “In some of these circumstances, some of these people might not have survived if it weren’t for the efforts of first responders to rescue them from vehicles.”

Hundreds of vehicles were left abandoned in the snow as the storm howled in Buffalo, according to New York State Police Acting Superintendent Steven Nigrelli. Authorities were going door-to-door, car-to-car, checking for people, he said.

As crews continue to dig out vehicles drowning in snow-covered roads and highways, New York Gov. Kathy Hochul stressed the importance of abiding by local and state driving bans in place in Western New York. Buffalo, Lackawanna and Cheektowaga all remain under driving bans during the overnight hours.

“We have scores and scores of vehicles that were abandoned when people left during the storm,” Hochul said during a Monday news conference. “It is still a dangerous situation to be out,” she added.

Of the 27 deaths reported in Erie County, three were attributed to an EMS Delay, while others involved people who were outside, in cars, had no heating or suffered cardiac arrest – and the death toll is still expected to rise, officials have said.

“I have a bad feeling about that. I think the death toll is going to go up,” the sheriff said. “When you have 420 EMS calls that are unanswered, it’s just gut-wrenching.”

As the storm trapped people indoors, many faced difficult conditions at home as well. The storm caused significant power outages in the area after electrical substations became snowed in and even frozen, meaning residents were home with no heating.

And getting the lights back on has been no easy task, as utility crews are faced with dangerous weather conditions that made accessing the substations difficult, according to Hochul.

“There are some people that have been without power in their homes since Friday, we know that,” Buffalo’s mayor said, adding that his own home was without power and the temperature indoors went down to 40 degrees, forcing his family to layer up.

As of Monday, fewer than 10,000 customers in Buffalo were without power, Brown said.

The perilous and prolonged winter storm that barreled across the nation over the past week affected much of the US, as an arctic blast plunged temperatures to dangerous levels in much of the country.

About 3,800 flights into or out of US airports have been canceled as of 7 p.m. ET Monday, according to tracking site FlightAware.i The total includes more than 2,500 flights canceled by Southwest Airlines, which canceled 70% of its flights.

The Buffalo Niagara International Airport, which closed Friday due to “hazardous weather conditions” and saw 43 inches of snow, is expected to remain closed until late Wednesday morning, the Niagara Frontier Transportation Authority said on Twitter. Pittsburgh International Airport is now sending snow equipment to Buffalo Airport to assist with reopening the airfield, according to a news release Monday.

At least 49 storm-related deaths have been reported across several states.

• New York: In addition to the 27 deaths in Erie County, one fatal carbon monoxide poisoning has been reported in Niagara County.

Colorado: Police in Colorado Springs reported two deaths related to the cold since Thursday, with one man found near a power transformer of a building possibly looking for warmth, and another in a camp in an alleyway.

• Kentucky: Three people have died in the state, officials have said, including one involving a vehicle crash in Montgomery County.

• Missouri: One person died after a Caravan slid off an icy road and into a frozen creek, Kansas City police said.

• Ohio: Nine people have died as a result of weather-related auto crashes, including four in a Saturday morning crash on Interstate 75, when a tractor-trailer crossed the median and collided with an SUV and a pickup, authorities said.

• Tennessee: The Department of Health on Friday confirmed one storm-related fatality.

• Wisconsin: The State Patrol on Thursday reported one fatal crash due to winter weather.

• Vermont: One woman in Castleton died after a tree fell on her home, according to the police chief.

Buffalo has had the snowiest start ever to a winter season, receiving 92.7 inches of measurable snowfall from October through Christmas Day, according to the National Weather Service. The latest storm came just one month after the region was slammed with a historic snowstorm. After another 6.3 inches fell Monday, the city is now close to hitting 100 inches.

Buffalo remains under a winter weather advisory until Tuesday afternoon, with the possibility of up to 7 more inches of snowfall. However, temperatures will be slightly higher than they have been in previous days, with a high of 30 degrees in the daytime and a low of 26 at night.

Supermarkets were beginning to reopen in western New York on Monday, and others were expected to reopen Tuesday.

Hochul said Monday that the state has stockpiled ready-to-eat meals and “thousands” are ready to be distributed to food banks but noted that road conditions are paralyzing aid efforts.

“We have a responsibility to have all these resources on hand. But, when mother nature literally shuts down and creates a wall that you cannot see past, it is not safe, for not just emergency vehicles, but the trucks that are bringing groceries to the stores and the stores are being shutdown anyhow – that is the paralysis we’re experiencing,” Hochul said.

The governor submitted a request to President Joe Biden for a federal emergency declaration for Erie and Genesee counties, which “will be crucial to assist our recovery efforts from this historic storm,” she said.