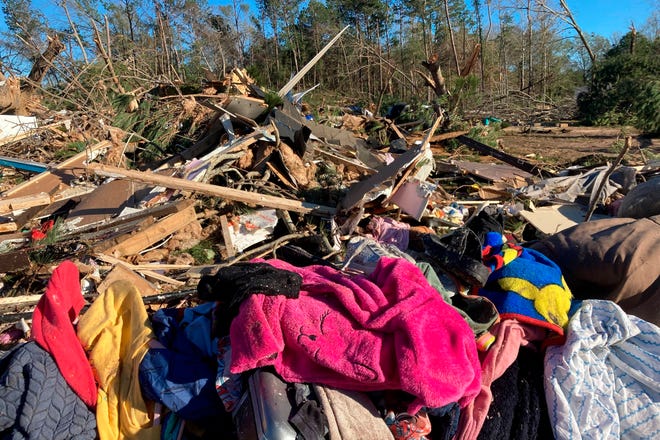 The massive storm fueling blizzard conditions across the nation’s northern tier and killer tornadoes in the South set its sights on the Northeast Thursday, promising snow, ice and high winds from Virginia through New England.

“Significant” accumulating ice and heavy snow was forecast for the interior Mid-Atlantic and New England state Thursday into Friday, the National Weather Service said. Heavy rain and severe weather that spun off numerous of tornadoes in recent days were also expected to continue marching through the Southeast into Florida.

Accumulating snow reaching more than a foot in some areas will fall on approximately 200,000 square miles of the interior Northeast on Thursday and Friday,  AccuWeather warned.

Rain, a wintry mix, and snow began to spread across the Mid-Atlantic and Carolinas early Thursday. The National Weather Service issued ice storm warnings for parts of Virginia, West Virginia, Maryland and Pennsylvania. Snow was forecast to roll into interior New England on Friday as the front moves northward up the coast, with up to two feet of snow possible in isolated areas.

The ice was not supposed to make it to Washington, D.C., Philadelphia, New York City and Boston, where heavy rain was forecast.

In Louisiana, residents of Caddo Parish were cleaning up and mourning the loss of Yoshiko Smith, 30, and Nikolus Little, 8, killed when a tornado destroyed their home Tuesday. Preslie Stevens and her daughter Lana were home when the tornado touched down, just yards away from Smith home.

“It was raining and then the power went out and we heard loud wind and we got in the closet,” She said, “I tried to shut the door a bunch of times, and it wouldn’t shut…  I heard the windows busting and all this stuff flying around.”

Stevens was able to find safety in that closet with her daughter and two cats, but their home is completely destroyed.

The rest of the country was not yet freed from the historic storm’s grip. Heavy snow and blizzard conditions will continue through Thursday for much of the Midwest, the National Weather Service said. More than 150,000 homes and businesses were without power across Minnesota, Wisconsin and Michigan.

Wind chill temperatures below zero will continue for portions of the region, the weather service said.

Parts of Oklahoma, Texas, Louisiana and Mississippi were in recovery mode after multiple days of severe weather and tornadoes as the weather system stalled over the region.

The weather service confirmed 14 tornadoes in Texas alone. In Louisiana, a mother and son were killed in the northwestern part of the state Tuesday, and a woman in southeastern St. Charles Parish died in a storm Wednesday. Hundreds of homes and businesses across the region were damaged or destroyed.

The front rolled in from the Pacific with a powerful start Saturday, dumping more than 7 inches of rain in some parts of Southern California and multiple feet of snow in Sierras.