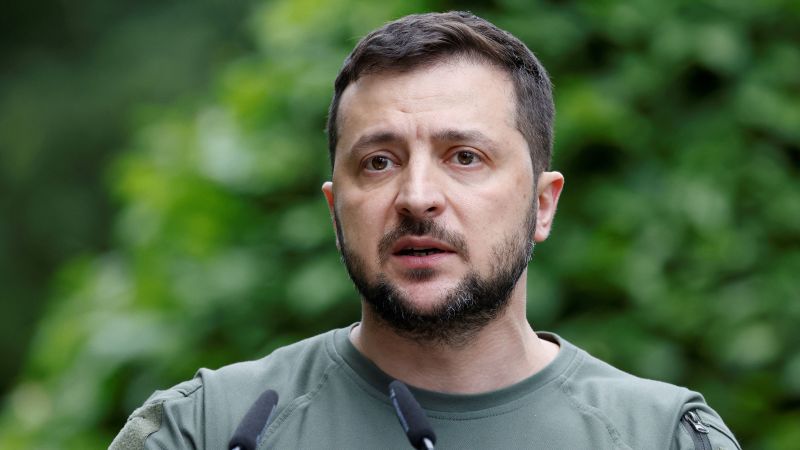 President Joe Biden and Ukrainian President Volodymyr Zelensky are planning to meet at the White House on Wednesday, according to two sources familiar with the planning, in a Washington visit that is tentatively scheduled to include an address to a joint session of Congress.

Zelensky is already on his way to Washington, two separate sources said, for a visit that marks his first trip outside of Ukraine since the Russian invasion began in February of this year.

The visit to the White House, which hasn’t been finalized and has remained tightly held due to security concerns, will include a meeting with Biden and top administration officials and is planned to coincide with the administration’s intent to send the country a new defense assistance package. Biden will announce an additional $1.8 billion in security assistance to Ukraine during the expected visit, a significant boost in aid headlined by the Patriot missile systems within the package, a US official told CNN.

The new announcement will add to the nearly $20 billion in US security assistance provided to Ukraine since Russia’s invasion began, and will come at the same moment US lawmakers are considering a sweeping government spending measure that includes an additional $45 billion in emergency assistance to the country.

The White House declined to comment on a potential visit or Biden announcement or new security assistance announcements.

Lawmakers are also planning for Zelensky to visit Capitol Hill to speak on Wednesday evening, though sources say the visit hasn’t been finalized as officials work through security preparations. House Speaker Nancy Pelosi wouldn’t confirm reports Zelensky would be coming to the Capitol on Wednesday, saying, “I don’t know that that’s going to happen.”

When asked by CNN if the invitation had been made to him, she said: “No. Not until we know if he can come.”

A visit by the Ukrainian leader to Washington would amount to a significant moment 10 months since Russia’s war in Ukraine began. Zelensky has emerged as an international personification of Ukrainian resistance to the invasion and has spent much of the year asking nations for support.

He’s delivered those appeals virtually, beaming into international summits and global legislatures to make his case for more weapons and funding. He has remained inside his country for the duration of the war, a reflection both of his desire to rally his besieged country and the precarious security situation he would face outside Ukraine.

At the start of the war, Zelensky remained bunkered down in the capital Kyiv, often addressing the nation from undisclosed locations. More recently, he’s traveled to some of the war’s fronts, including on Tuesday when he visited the frontline city of Bakhmut, in the Donetsk region of eastern Ukraine. Ukrainian and Russian forces have been locked in brutal battle there for months.

Zelensky met with soldiers and handed out awards, according to his office. Video posted by state TV showed the president clad in fatigues and a flak vest presenting awards to troops. Bakhmut has seen some of the most ferocious fighting in the whole of the country since Russian forces launched their siege on the city in earnest in May, turning it into ruins.

Pelosi has been making calls to members urging them to show up to the Capitol on Wednesday over fears the chamber would be empty ahead of the holiday recess, one member said. Pelosi asked for members to be in attendance Wednesday night “for a very special focus on Democracy.”

The expectation from members, per several sources, is Zelensky will address Congress on Wednesday. But the sources caution that this may not be final yet over security concerns.

Ukraine has been calling for the US to send the advanced long-range air defense system that is highly effective at intercepting ballistic and cruise missiles as it comes under a barrage of Russian missile and drone attacks that have destroyed key infrastructure across the country.

A Patriot missile battery would be the most effective long-range defensive weapons system sent to the country and officials say it will help secure airspace for NATO nations in eastern Europe. CNN first reported last week that the US was planning to send Patriot systems to Ukraine.

It is not clear how many missile launchers will be sent but a typical Patriot battery includes a radar set that detects and tracks targets, computers, power generating equipment, an engagement control station and up to eight launchers, each holding four ready-to-fire missiles.

Once the plans are finalized, the Patriots are expected to ship quickly in the coming days and Ukrainians will be trained to use them at a US Army base in Grafenwoehr, Germany, officials said.

Ukraine has been asking for the system for months but the logistical challenges of delivering it and operating it are immense. Despite those obstacles, “the reality of what is going on the ground” led the administration to make the decision, the senior administration official told CNN, noting the continuing intense Russian missile barrages.

The system is widely considered one of the most capable long-range weapons to defend airspace against incoming ballistic and cruise missiles as well as some aircraft. Because of its long-range and high-altitude capability, it can potentially shoot down Russian missiles and aircraft far from their intended targets inside Ukraine.

This story has been updated with additional reporting.