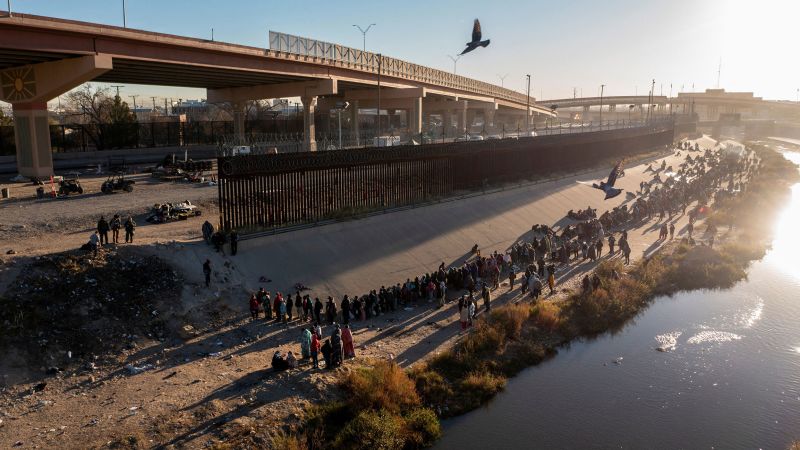 As administration officials considered a border proposal reminiscent of the Trump era this month, Senate Majority Leader Chuck Schumer called Ron Klain, President Joe Biden’s chief of staff, with concerns, according to three sources with knowledge of the call.

The call – one of many that have come in from lawmakers to the White House – was indicative of the politically precarious position for Biden as officials try to fend off Republicans pounding the administration over its handling of the border and appease Democrats concerned about barring asylum seekers from the US.

The Biden administration now faces a December deadline to terminate a public health authority, known as Title 42, that was invoked at the onset of the coronavirus pandemic and allowed officials to turn away migrants encountered at the US southern border – putting immigration back at the forefront.

The termination of the authority is expected to lead to an increase in border crossings since authorities will no longer be able to quickly expel them as has been done since March 2020.

During the call between Schumer and Klain, the Senate majority leader raised concerns about the administration’s preparation for the looming termination and whether officials were indeed considering a new asylum policy, according to two sources with knowledge of the call.

Schumer and Klain speak regularly and often daily or more in critical moments like the year-end legislative sprint currently underway. But the border issue’s emergence in discussion provides a window into a complex policy and political moment.

Schumer, a New York Democrat who has long pressed the administration to terminate Title 42, is far from alone. Administration officials have received a steady stream of calls from lawmakers as well as state and local officials, reflecting often sharply divergent views on the merits of the authority, people familiar with the matter said. The calls, however, all echoed consistent concerns about the termination of Title 42 and what it will mean along the border in recent weeks.

It’s a dynamic that has played out as the Biden administration intensively prepares for a moment officials have long grappled with how to navigate. To some degree, it’s the latest phase of an effort that has long been underway, with officials keenly aware since the opening days in office that at some point the pandemic-era policy would come to an end. Personnel and technology infrastructure have been directed to key entry points, with increased levels and resources expected to be announced in the days ahead.

Asked about concerns inside the administration about the potential for a surge at the border once Title 42 goes away, White House press secretary Karine Jean-Pierre listed off a series of personnel, processing and infrastructure efforts that have been put into place.

Still, the cross-cutting viewpoints on border policy have converged with the significant diplomatic component tied to managing a rapid shift in the countries of origin of the migrants apprehended at the border, one that has added a new layer of difficulty for the administration.

Throughout, administration officials have stressed that the only viable long-term solution will come from congressional action, noting encouragement with a bipartisan framework released in the Senate last week.

According to sources familiar with the discussions, however, the long-shot bipartisan immigration deal led by Sens. Thom Tillis, a North Carolina Republican, and Kyrsten Sinema, who recently announced that she is leaving the Democratic party and registering as an independent, is essentially dead this Congress.

The framework, which would have extended protections for Dreamers and extended Title 42, was unlikely to build momentum in the brief lame-duck session.

CNN has reached out to Tillis’ and Sinema’s offices for comment.

Despite a legal process that remains up in the air, officials are deep into preparation as they stare down ominous signs of what may come next.

Already, over the weekend, more than 2,400 migrants crossed into the United States each day in only one section of the border, according to a senior Border Patrol official, marking what he described as a “major surge in illegal crossings” in the El Paso, Texas, sector.

Homeland Security officials have described the mood within the administration as concerned and worried about an influx in the near term.

In the face of losing Title 42 and amid concerns of a surge, officials have weighed what immigrant advocates have described as a draconian approach by creating hurdles for migrants seeking asylum in the United States. The asylum proposal was included in a memo sent from the Department of Homeland Security to the White House, one source told CNN.

White House officials have also been in daily conversations with DHS officials about planning, sources told CNN. The National Security Council, which has been heavily involved in migration management amid mass movement across the Western hemisphere, has also played a critical role, sources said.

“The team has been working really hard to ensure we’re taking steps to manage the expiration of Title 42 and put in place a process that’s orderly and humane. And we believe in doing so, we can protect our security concerns,” national security adviser Jake Sullivan said Monday.

If adopted, the asylum proposal would be reminiscent of a policy put in place during the Trump administration that dramatically limited the ability of migrants to claim asylum in the US if they resided or traveled through other countries prior to coming to the US. No decision has been made on the proposal.

Administration officials have also set other plans in motion in anticipation of a surge of migrants when Trump-era Covid restrictions are lifted this month following a court order blocking the use of Title 42. The legal fight intensified this week when 19 Republican-led states asked a federal appeals court to rule on their request to suspend the termination of the policy by Friday, according to a court filing.

Since March 2020, when the authority was invoked, border officials have turned away migrants at the US-Mexico border more than two million times.

The Department of Homeland Security is preparing temporary facilities to process migrants, including in El Paso, as well as discussing ways to return non-Mexican migrants to Mexico through existing legal mechanisms aside from Title 42, according to two Homeland Security officials who stressed there’s been hourslong meetings daily to plan for an influx of migrants.

In a document outlining border security preparedness and obtained by CNN, DHS broke down its six-pillar plan, which was released in the spring and has since been updated. It includes scaling up ground and air transportation capabilities to transport migrants for processing and remove them, leaning on a CBP One mobile application to process asylum seekers, and increasing referrals for prosecutions for repeat border crossers, the document said.

In it, DHS also stressed the need for congressional action to update outdated statutes and help create a functioning asylum system, as the current one is under immense strain.

But just days away from the anticipated end of Title 42, plans are still being sorted out.

“The 21st (is) going to be a disaster. There are so many things in the pipeline, but nothing is ready (to) go,” one official said, referring to December 21 when Title 42 is set to end.

Homeland Security Secretary Alejandro Mayorkas underscored the whole of government approach in a statement, noting that mass movement of people around the globe has posed a uniquely difficult challenge.

“Despite our efforts, our outdated immigration system is under strain; that is true at the federal level, as well as for state, local, NGO, and community partners. In the absence of congressional action to reform the immigration and asylum systems, a significant increase in migrant encounters will strain our system even further,” he said.

“Addressing this challenge will take time and additional resources, and we need the partnership of Congress, state and local officials, NGOs, and communities to do so,” he added.

Democratic Rep. Henry Cuellar of Texas, however, has called Title 42 critical and criticized what he called a “whack a mole” approach to the issue.

“If there’s a surge in the valley, they’ll move people down there. If there is more people crossing let’s say, Del Rio, Eagle Pass they’ll move agents over there. Now they’re moving agents to El Paso. This is not the way to secure the border,” Cuellar said Wednesday on “CNN This Morning,” adding a call for Biden to visit the border and see the situation for himself.

“I don’t know why they keep avoiding the border and saying there’s other things more important than visiting the border,” he said. “If there’s a crisis, show up. Just show up.”

Officials have already been contending with thousands of migrants crossing the border daily and expect those numbers to increase in the coming days and weeks, overwhelming already-strained resources.

CNN previously reported that DHS is preparing for multiple scenarios, including projections of between 9,000 to 14,000 migrants a day, more than double the current number of people crossing.

Over the weekend, US border authorities apprehended more than 16,000 people, US Border Patrol Chief Raul Ortiz said on Twitter. Among the cities seeing an influx in migrants is El Paso, which has previously grappled with a surge of migrants.

El Paso city officials said Tuesday they’re monitoring the situation and are in ongoing discussions with federal, state, and local partners. Mayorkas also visited El Paso on Tuesday where he met with the Customs and Border Protection workforce and local officials.

The Biden administration is also asking Congress for more than $3 billion as it prepares for the end of Title 42, according to a source familiar with the ask.

The request is intended to shore up resources for border management and technology and is part of broader funding discussions. It is not specific to the end of Title 42, the source said.

“If Republicans in Congress are serious about border security, they would ensure that the men and women of the Department of Homeland Security have the resources they need to secure our border and build a safe, orderly, and humane immigration system,” White House spokesperson Abdullah Hasan said in a statement.

Other border cities are also bracing for an influx of arrivals, including Laredo, Texas.

Cuellar, who represents Texas’ 28th District, told CNN he’s in close touch with the city of Laredo about preparations, adding that the city may bus migrants to other locations as they’ve done in the past if nonprofits can’t handle the influx of arrivals.

This story has been updated with additional developments.