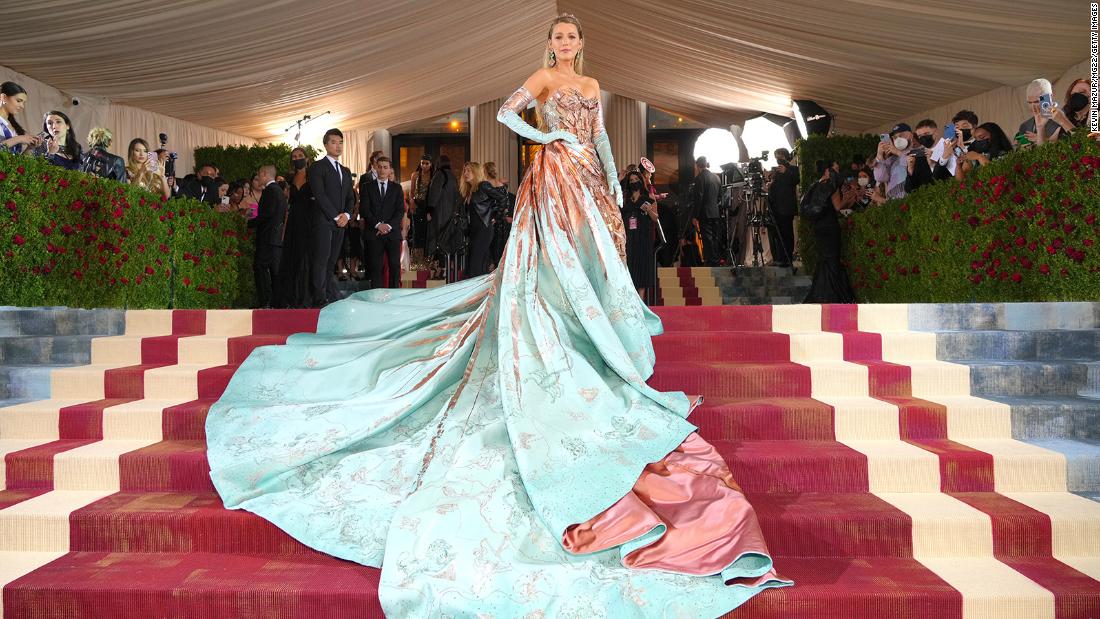 The 2022 red carpet circuit — filled with experimentation, self-expression and play — was one to remember.

At the New York premiere of ‘The Batman’ in March, Zoe Kravitz’s gown included a playful cat motif as a wink to her on-screen character, Catwoman. Credit: Evan Agostini/Invision/AP

The global press tour for “The Batman,” starring Robert Pattinson and Zoe Kravtiz, was filled with sartorial nods to the film’s characters. But the apex of the red carpet circuit, spanning three countries, had to be Kravitz’s Oscar de la Renta gown worn to the film’s New York City premiere. The column dress featured a gothic corset detail along with two bust panels shaped like cat silhouettes in honor of Kravitz’s role as Catwoman.

Blake Lively in Versace for the 2022 Met Gala

In May, celebrities interpreted the Met Gala theme, “Gilded Glamour,” in a multitude of ways, with some opting for more historical accuracy than others (Kim Kardashian’s controversial Marilyn Monroe dress was plucked from another era entirely). Meanwhile, Blake Lively’s gown was an undisputed triumph and a symbolic tribute to the Gilded Age architecture of New York City. The custom Versace design was first bundled in an oversized satin bow, which was undone to reveal a long skirt that draped across the stairs. As well as the dress’ color, a homage to the patina of the Statue of Liberty, the ensemble included details of some of the city’s most famous landmarks from the Empire State Building to Grand Central Station. Even her tiara was a reference to Lady Liberty, with 25 stones to represent 25 windows of the iconic statue’s crown.

This year, after rising to fame in 2021 while playing Princess Diana in season four of the Netflix’s drama “The Crown,” Emma Corrin cemented themselves as a red carpet risk taker. Whether it be the zany Loewe deflated balloon bra worn to the 2022 Olivier Awards or a custom Miu Miu 19th-century Dandy-inspired ensemble for the Met Gala (complete with top hat), Corrin has consistently shown how to prioritize fun and fantasy above all else. At the BFI Film Festival in London, Corrin arrived in a kitschy JW Anderson look fresh off the Spring-Summer 2023 runway. The goldfish dress, a one-shoulder mini dress with a bubble shape and glossy finish, is printed with a photo of an orange goldfish.

Jada Pinkett Smith in Jean Paul Gaultier at the 2022 Oscars

While Jada Pinkett Smith’s red carpet look was somewhat overshadowed by her husband’s notorious slap, the iridescent emerald green gown was one of the most visually arresting outfits of the night. Featuring a fitted bodice, a flared high neck, and a rippling, sculptural skirt, the gown — designed by Glenn Martens for Jean Paul Gaultier — was first unveiled on the runway at Paris Haute Couture Week in January.

Chalamet caused a stir in his backless Haider Ackermann suit at the “Bones And All” during the Venice Film Festival. Credit: Maria Moratti/Getty Images

During the same press run, Chalamet’s “Bones and All” co-star, Taylor Russell stepped out to the film’s premiere at the BFI Film Festival in London in an equally eye-catching outfit. Russell’s dramatic head-to-toe Schiaparelli look, featuring a long-lined, full boned corset, was designed by the luxury house’s creative director Daniel Roseberry. Hand-sewn at the Paris atelier, Russell’s jacket took over 150 hours to create.

At the Cannes Film Festival in May, Anne Hathaway reminded us of all her roots as Genovian Royalty in the 2000s “Princess Diaries” franchise. The actress looked ethereal on the red carpet in an all-white Armani Privé gown, completed with spectacular sapphire jewelry for the screening of the new film “Armageddon Time.”

With the help of longtime stylist Law Roach, Zendaya, who regularly delights red carpet onlookers, stole the show once again at the 74th Emmy Awards in September. Up for Best Actress in a Drama for her role in “Euphoria,” the starlet looked the picture of glamour in a billowing, strapless black Valentino gown.