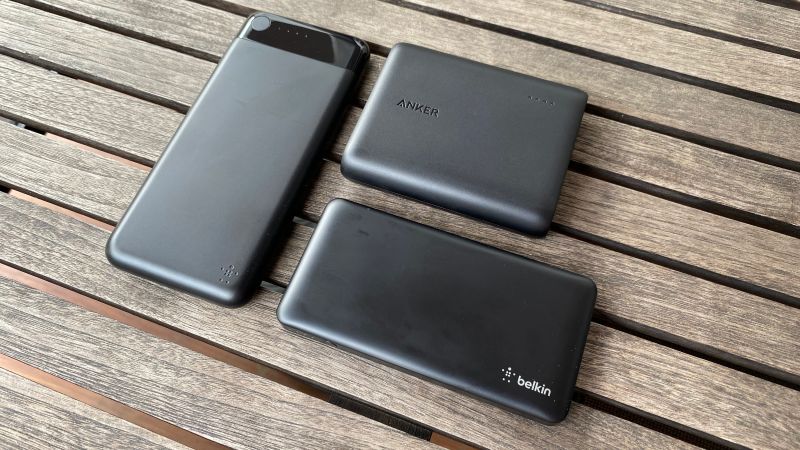 Even when working from home, a power supply can be hard to come by, what with your computer, monitor, WiFi hub and other gadgets and gizmos and their wall chargers hogging those sparse outlets. And when you’re on the go, a solid power source is especially a necessity. The solution: a portable charger to keep your phone, tablet and more juiced to the max.

So to help identify the best options for avoiding that dreaded “low battery” notification, we spent several weeks testing portable chargers — draining devices, charging them up and calculating capacities. Ultimately, we found three winners that each stole the show in their own way.

Where the Anker PowerCore 13000 shone most was in charging capacity. It boasts 13,000mAh, which is enough to fully charge an iPhone 11 two and a half times. Plus, it has two fast-charging USB Type-A ports so you can juice a pair of devices simultaneously.

The ultraportable Belkin Power Pocket 5K is almost the exact same size as an iPhone SE, but weighs even less. And, proving the old adage “big things come in small packages” correct, it packs enough power to fully charge an iPhone 11 from its singular USB Type-A port.

The Belkin Boost Power Pocket 5K goes hand-in-hand with iPhones thanks to the inclusion of a Lightning port along with the USB Type A port. That means you can use the same cord to charge your phone and refill the battery.

Simply put, the Anker PowerCore 13000 packs a ton of value.

You can charge a lot with this thing — and quickly. The PowerCore 13000 has enough capacity to bring an iPhone 11 to full charge two and a half times, or two Samsung Galaxy S20s from empty to more than 90%. And you won’t be sitting by idly for too long, either, as the PowerCore 13000 takes just 41 minutes to charge an iPhone 11 to 50%, tied for fastest charging in our testing.

While the PowerCore 13000 doesn’t fully live up to its promise of 13,000mAh (we found it delivers 7918mAh), it hit a respectable 61% of what’s advertised — a percentage that put it about average among all the batteries we tested. In other words: None of the portable chargers we tested fully lived up to their claims, and the PowerCore 13000 still has more charging capacity than most others we tested. (You can read more about how we measured mAhs by scrolling down.) Plus, it’s just a few more bucks than the Belkin Pocket Power 5K for more than double the mAhs.

The side of the battery houses three ports: dual USB Type-A ports (which are fast-charging) and a micro-USB port to charge the battery itself — allowing you to run several USB-C cables to different devices all at once. When we charged an iPhone 11 and a Nintendo Switch simultaneously, the battery barely heated up. Four LED lights alert you to the charger’s remaining battery life, with a button on the edge to turn the lights on.

The charger’s matte plastic design feels nice to the touch and resists smudging surprisingly well. It’s about the size of a full wallet, so it’s easy to carry around. And it’s durable: The charger survived our drop tests, which included a 3-foot drop onto grass and a 1.5-foot drop onto carpet, with neither external nor internal damage. (You can read more about our durability testing below.)

Overall, not only does the Anker PowerCore 13000 pack major mAhs, but it’s got two ports for your USB cables and is fairly small and durable.

When we first encountered the Belkin Power Pocket 5K, it was hard to believe its size: just 5 inches long, 2.5 inches wide and a half-inch thick. There are few places this battery won’t fit, yet many devices it’ll charge.

It was the smallest and the lightest charger we tested; you might even mistake it for the phone in your pocket. This portable charger is really the definition of a personal power bank, easily whipped out of a pocket and held alongside your mobile device.

The charging capacity of the Power Pocket 5k is modest, but it did come closest to living up to its claimed output out of all the models we tested. While its maximum capacity is stated to be 5,000mAh, we measured it at about 3,655mAh. That’s 73% of the expected value, which is 12% better than average in our testing. While its capacity isn’t huge, it’s more than enough to bring an iPhone 11 or Samsung Galaxy S10 battery back to full life. The only significant downside we could find was the charging speed: It takes a little more than 51 minutes to charge an iPhone 11 to 50%.

The Anker PowerCore 13000 features four battery-indicating LEDs on its side alongside a button to turn them on. Around the corner are the ports: a single USB-C input along with a micro-USB port to charge the battery with the included charging cable. Like the PowerCore 13000, the Pocket Power 5K received no superficial or internal damage during our drop testing. And you can rest assured that even if you do break it, it comes with a two-year warranty along with a generous $2,500 connected equipment warranty (which covers unlikely electrical damage to tech that was properly plugged into the Pocket Power 5K).

The wee-as-can-be Belkin Pocket Power 5K is impressive for its size. Although the capacity isn’t huge, it’s more than enough to fulfill the needs of most personal devices and small enough to keep in your pocket everywhere you go — and a bit lighter on the wallet for those on a budget.

The Belkin Boost Charge Power Pocket 5K offers a bit less capacity than the Belkin Power Pocket 5K, but it’s a match made in heaven for iPhones — and it charges faster, too.

Along one side of the Belkin Boost Charge resides a USB Type-A port and a Lightning port (MFi-approved) to charge the battery. This is the big deal here — that’s the very same kind of port that your iPhone and iPad has. In other words, as long as you have a Lightning cable to charge your iPhone (we’re going to assume you do), you have a cable to recharge your battery, too. Consolidating cables is a big win in our book. This charger also pairs better alongside a smartphone because it’s lighter than the Anker 13000 and sports more of a rectangular shape, so it fits a bit more snug in the hand.

The Boost Power Pocket 5K has more than enough juice to fully charge an iPhone 11. It also took a little more than 45 minutes to charge an iPhone 11 to 50%, which is faster than the Belkin Pocket Power 5K by six minutes. The capacity of the BOOST Power Pocket 5K is advertised as 5,000mAh and, during our testing, we measured about 3,415mAh. That’s nearly 70% of the advertised value, making it one of the top three batteries we tested in terms of living up to its promise (the average was about 61%).

All in all, the Belkin Boost Charge Power Pocket 5K is a terrific personal charger for your iPhone. With both MFi certification and cable consolidation thanks to the Lightning port, it should really stand out to iPhone users.

We ran each and every portable charger through a series of tests. We charged each battery to full, ran it dry juicing up one or several devices, calculated its capacity and compared charging speeds. At the same time, we took a look at properties like weight, size, build quality and visual design. Whether it was a chunky battery that could charge all our tech, or a slim, sleek battery with enough to fill an iPhone, we put these things through the ringer.

Read on to see the breakdowns of all our testing categories.

The Otterbox Otterspot is unlike any portable charger we’ve seen before. The system works as follows: A disk-shaped charging pad can charge mobile devices wirelessly, as well as the included disk-shaped battery via charging pins. The battery, which can be stacked up to three on the pad, can charge devices wirelessly or with a cable and then be recharged upon the pad. Wirelessly, it only delivered 2,519mAh to an iPhone 11. With a wired connection, it provided 3,134mAh. This is significantly less than, say, the 3,655mAh from the Belkin Pocket Power 5K with the same 5,000mAh promise. Overall, the Otterbox Otterspot is an awesome concept that may need some work on the capacity end.

TheAnker PowerCore III Sense 10K is a beautiful charger. It comes in multiple vibrant colors and features a woven yarn surface on top and matte plastic below. Unfortunately, it only provided 4,189mAh of its expected 10,000mAh capacity. This is 42% of the expected value, compared with the 61% the Anker PowerCore 13,000 was able to achieve. Despite its aesthetic beauty and quality build, this battery dropped the ball on capacity.

The Anker PowerCore II 20000 is the same price as the Anker PowerCore III Sense 10K, but provides 12,300mAh of its promised 20,000mAh. This is a more respectable 61.5% of what’s expected. The battery is pretty hefty and large, but it feels very durable and has a unique texture that eliminates most smudging. Compared to its 20,000mAh counterpart, the Elecjet PowerPie Power Bank, it weighs way less and provides more mAhs.

The Aukey 8,000mAh Power Bank was a favorite among those we tested. It’s quite slim, and a little lighter than the Anker PowerCore 13000. Out of the 8,000mAh expectation, it delivered 5509mAhs, which is almost 70%. That’s impressive, made better by three functional output ports and wireless charging (a feature that didn’t end up working on our unit). But despite this battery’s promising properties, it fell short of the PowerCore 13000’s capacity at a higher price, and it didn’t charge an iPhone 11 nearly as fast.

The Elecjet PowerPie Power Bank lists the same 20,000mAh capacity as the Anker PowerCore II 20000, except it reached just 11,969mAh, or about 60% of what we expected. It also weighs more and has a less sleek design, which didn’t help it score-wise. Overall, it’s got a lot of juice to provide, but it didn’t find a place among the winners.