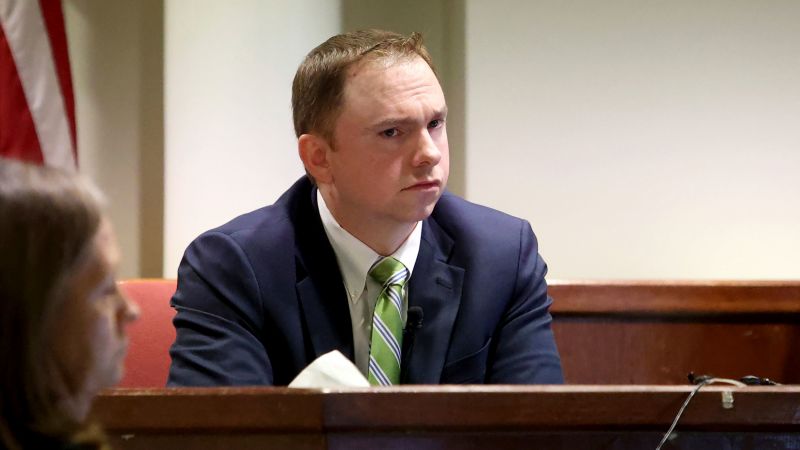 A former Forth Worth, Texas, police officer was found guilty of manslaughter Thursday in the 2019 shooting of 28-year-old Atatiana Jefferson in her home.

Dean, who is White,  faces up to 20 years in prison for the conviction.

He had pleaded not guilty to murder, a charge which carried a possible sentence of five to 99 years. Jurors were instructed Wednesday to also consider the lesser included offense of manslaughter.

Dean, in a gray suit, showed no emotion as the verdict was read.

Members of Jefferson’s family were expressionless in the courtroom as the judge announced the verdict, CNN affiliate WFAA TV reported. There was no immediate comment from family members.

Defense attorneys had said Dean fired in self-defense, but prosecutors argued there was no evidence he saw a gun in the Black woman’s hand before firing through a bedroom window.

Jefferson’s 11-year-old nephew, who was with her at the time, and Dean’s police partner – who responded with him to what they believed was a burglary – were the primary witnesses to the shooting and testified at trial. Dean took the stand and said he fired at Jefferson because she pointed a gun at him.

The verdict comes more than three years after Dean and his partner responded to Jefferson’s house around 2:25 a.m. on October 12, 2019, in response to a neighbor calling a nonemergency police line to report that her doors were open.

The jury got the case Wednesday afternoon after closing arguments in which the state portrayed Dean as a power-hungry former cop whose preconceived notions about the neighborhood where Jefferson lived tainted his conduct the night of the shooting.

The defense countered that Dean fired his weapon in self-defense while fearing for his life in what attorneys said was a tragic accident but not a criminal act.

Dean resigned days afterward and was arrested and charged in the killing of Jefferson.

“If you can’t feel safe in your own home, where can you feel safe?” Tarrant County Prosecutor Ashlea Deener told jurors in closing arguments on Wednesday. “When you think about your house, you think about safety. It’s where you go to retreat, to get away from the world.”

Dean, the prosecutor said, had a “tremendous amount of power” when he put on his uniform.

“And the Fort Worth Police Department – those officers that do serve and protect us, that don’t have those preconceived notions, that did a thorough investigation in this case – are ashamed that they ever called somebody like him a brother in blue,” she added, referring to the former officer.

Defense attorney Bob Gill told jurors Dean feared for his life as he peered through the bedroom window that night.

“The state cannot prove to you beyond a reasonable doubt that this was not self-defense,” Gill said. “It’s tragic, but is not an offense under the state of Texas.”

Holding his hands in the air to show the size of the gun Dean claimed he saw through the bedroom window, Gill told the jury: “What is immediately more necessary than having a handgun stuck in your face? And you have heard from several people, starting with Aaron, that that handgun was this big when he saw it.”

Dean testified Monday that he fired at Jefferson because she pointed a gun at him.

“As I started to get that second phrase out, ‘Show me your hands,’ I saw a silhouette,” the former officer said. “I was looking right down the barrel of a gun, and when I saw the barrel of that gun pointed at me, I fired a single shot from my duty weapon.”

Dean said he had his weapon out because he believed the home was in the midst of being robbed. He fired at her through the window “because we’re taught to meet deadly force with deadly force. We’re not taught that we have to wait,” he said.

In cross-examination, however, Dean admitted many of his actions that night were “bad police work,” including firing without seeing her hands or what was behind her, failing to tell his partner he saw a gun and rushing into the home without fully ensuring it was safe.

“You’ve got another fellow officer from the Fort Worth Police Department entering a home which you have determined to be a burglary in progress with a possible armed assailant, and you didn’t think to tell your partner, ‘Hey there’s a gun inside?’” prosecutor R. Dale Smith asked.

Woman shot and killed by police officer in her own home

“You didn’t think to tell her, ‘Hey I saw somebody with a gun?’” Smith asked.

Dean’s testimony is pivotal in the trial, which also featured body-camera footage of the shooting and testimony from the primary witnesses, Dean’s police partner Carol Darch and Jefferson’s 11-year-old nephew.

On the stand, Dean described the silhouette he saw as being “bent over” facing the window with upper arm movement.

He grew emotional as he spoke about the moments after he shot Jefferson.

“I observed the person that we now know is Ms. Jefferson. I heard her scream and saw her fall like this,” Dean said, gesturing in a downward motion. “And I knew that I’d shot that person.”

He said after firing the shot he tried opening the window to render aid but couldn’t get it open, so they ran around to the front door and entered the home. He and Darch went into the bedroom and saw a child there.

“I’m thinking, who brings a kid to a burglary? What is going on?” Dean said.

The prosecution’s first witness was Zion Carr, who was 8 years old and in the bedroom with his “Aunt Tay” when she was shot.

Now 11, the boy testified they had accidentally burned hamburgers earlier in the night, so they opened the doors to air the smoke out of the house.

He and his aunt were up late playing video games when Jefferson heard a noise outside, and she then went to her purse to get her gun, he testified. He did not see her raise her firearm toward the window, he testified.

Zion said he did not hear or see anything outside the window, but he saw his aunt fall to the ground and start crying.

“I was thinking, ‘Is it a dream?’” he testified. “She was crying and just shaking.”

Prosecutors also called to the stand Dean’s police partner, Darch, who testified she was with Dean when they went to investigate the home.

She said she believed the home was being burglarized because two doors were open, lights were on inside, cabinets were wide open and things were strewn about the living room and kitchen area.

She had her back to the window when Dean began to yell out commands for Jefferson to put her hands up, she testified. Darch said she started to turn around, heard a gunshot, then looked over Dean’s shoulder and could see a face in the window with eyes “as big as saucers.”

She testified she did not see Jefferson holding a gun and didn’t recall Dean ever saying Jefferson had a gun.

An attorney for Jefferson’s family said she was trying to protect her nephew from what they both thought was a prowler. She had moved into her ailing mother’s Fort Worth home a few months earlier to take care of her, family attorney S. Lee Merritt said at the time. She also took care of her nephews.

Jefferson graduated from Xavier University of Louisiana in 2014 with a degree in biology and worked in pharmaceutical equipment sales, according to her family’s attorney.