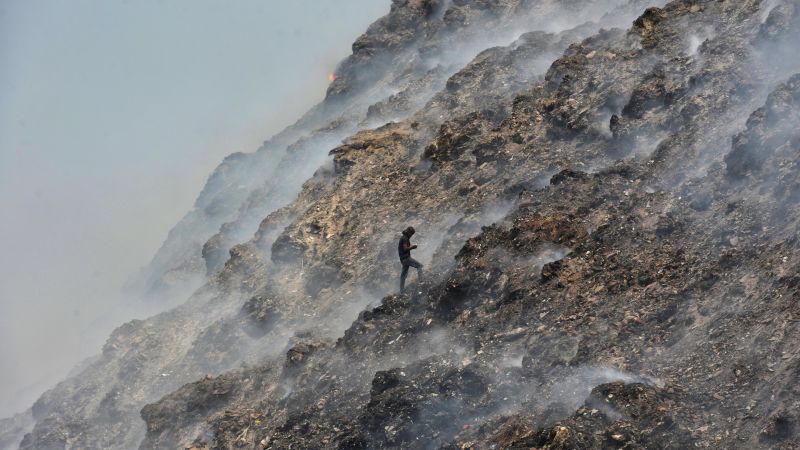 At the Bhalswa landfill in northwest Delhi, a steady flow of jeeps zigzag up the trash heap to dump more garbage on a pile now over 62 meters (203 feet) high.

Fires caused by heat and methane gas sporadically break out – the Delhi Fire Service Department has responded to 14 fires so far this year – and some deep beneath the pile can smolder for weeks or months, while men, women and children work nearby, sifting through the rubbish to find items to sell.

Some of the 200,000 residents who live in Bhalswa say the area is uninhabitable, but they can’t afford to move and have no choice but to breathe the toxic air and bathe in its contaminated water.

Bhalswa is not Delhi’s largest landfill. It’s about three meters lower than the biggest, Ghazipur, and both contribute to the country’s total output of methane gas.

Methane is the second most abundant greenhouse gas after carbon dioxide, but a more potent contributor to the climate crisis because methane traps more heat. India creates more methane from landfill sites than any other country, according to GHGSat, which monitors methane via satellites.

And India comes second only to China for total methane emissions, according to the International Energy Agency’s (IEA) Global Methane Tracker.

As part of his “Clean India” initiative, Indian Prime Minister Narendra Modi has said efforts are being made to remove these mountains of garbage and convert them into green zones. That goal, if achieved, could relieve some of the suffering of those residents living in the shadows of these dump sites – and help the world lower its greenhouse gas emissions.

India wants to lower its methane output, but it hasn’t joined the 130 countries who have signed up to the Global Methane Pledge, a pact to collectively cut global methane emissions by at least 30% from 2020 levels by 2030. Scientists estimate the reduction could cut global temperature rise by 0.2% – and help the world reach its target of keeping global warming under 1.5 degrees Celsius.

India says it won’t join because most of its methane emissions come from farming – some 74% from farm animals and paddy fields versus less than 15% from landfill.

In a statement last year, Minister of State for Ministry of Environment, Forest and Climate change Ashwini Choubey said pledging to reduce India’s total methane output could threaten the livelihood of farmers and affect India’s trade and economic prospects.

But it’s also facing challenges in reducing methane from its steaming mounds of trash.

When Narayan Choudhary, 72, moved to Bhalswa in 1982, he said it was a “beautiful place,” but that all changed 12 years later when the first rubbish began arriving at the local landfill.

In the years since, the Bhalswa dump has grown nearly as tall as the historic Taj Mahal, becoming a landmark in its own right and an eyesore that towers over surrounding homes, affecting the health of people who live there.

Choudhary suffers from chronic asthma. He said he nearly died when a large fire broke out at Bhalswa in April that burned for days. “I was in terrible shape. My face and nose were swollen. I was on my death bed,” he said.

“Two years ago we protested … a lot of residents from this area protested (to get rid of the waste),” Choudhary said. “But the municipality didn’t cooperate with us. They assured us that things will get better in two years but here we are, with no relief.”

The dump site exhausted its capacity in 2002, according to a 2020 report on India’s landfills from the Center for Science and Environment (CSE), a nonprofit research agency in New Delhi, but without government standardization in recycling systems and greater industry efforts to reduce plastic consumption and production, tonnes of garbage continue to arrive at the site daily.

Bhalswa isn’t the only dump causing distress to residents nearby – it is one of three landfills in Delhi, overflowing with decaying waste and emitting toxic gases into the air.

Across the country, there are more than 3,100 landfills. Ghazipur is the biggest in Delhi, standing at 65 meters (213 feet), and like Bhalswa, it surpassed its waste capacity in 2002 and currently produces huge amounts of methane.

According to GHGSat, on a single day in March, more than two metric tons of methane gas leaked from the site every hour.

“If sustained for a year, the methane leak from this landfill would have the same climate impact as annual emissions from 350,000 US cars,” said GHGSat CEO Stephane Germain.

Methane emissions aren’t the only hazard that stem from landfills like Bhalswa and Ghazipur. Over decades, dangerous toxins have seeped into the ground, polluting the water supply for thousands of residents living nearby.

In May, CNN commissioned two accredited labs to test the ground water around the Bhalswa landfill. And according to the results, ground water within at least a 500-meter (1,600-foot) radius around the waste site is contaminated.

In the first lab report, levels of ammonia and sulphate were significantly higher than acceptable limits mandated by the Indian government.

Results from the second lab report showed levels of total dissolved solids (TDS) – the amount of inorganic salts and organic matter dissolved in the water – detected in one of the samples was almost 19 times the acceptable limit, making it unsafe for human drinking.

The Bureau of Indian Standards sets the acceptable limit of TDS at 500 milligrams/liter, a figure roughly seen as “good” by the World Health Organization (WHO). Anything over 900 mg/l is considered “poor” by the WHO, and over 1,200 mg/l is “unacceptable.”

According to Richa Singh from the Center for Science and Environment (CSE), the TDS of water taken near the Bhalswa site was between 3,000 and 4,000 mg/l. “This water is not only unfit for drinking but also unfit for skin contact,” she said. “So it can’t be used for purposes like bathing or cleaning of the utensils or cleaning of the clothes.”

Dr. Nitesh Rohatgi, the senior director of medical oncology at Fortis Memorial Research Institute, Gurugram, urged the government to study the health of the local population and compare it to other areas of the city, “so that in 15 to 20 years’ time, we are not looking back and regretting that we had a higher cancer incidence, higher health hazards, higher health issues and we didn’t look back and correct them in time.”

Most people in Bhalswa rely on bottled water for drinking, but they use local water for other purposes – many say they have no choice.

“The water we get is contaminated, but we have to helplessly store it and use it for washing utensils, bathing and at times drinking too,” said resident Sonia Bibi, whose legs are covered in a thick, red rash.

Jwala Prashad, 87, who lives in a small hut in an alleyway near the landfill, said the pile of putrid trash had made his life “a living hell.”

“The water we use is pale red in color. My skin burns after bathing,” he said, as he tried to soothe red gashes on his face and neck.

“But I can’t afford to ever leave this place,” he added.

More than 2,300 tonnes of Municipal Solid Waste arrive at Delhi’s largest dump in Ghazipur every day, according to a report released in July by a joint committee formed to find a way to reduce the number of fires at the site.

That’s the bulk of the waste from the surrounding area – only 300 tonnes is processed and disposed of by other means, the report said. And less than 7% of legacy waste had been bio-mined, which involves excavating, treating and potentially reusing old rubbish.

The Municipal Corporation of Delhi deploys drones every three months to monitor the size of the trash heap and is experimenting with ways to extract methane from the trash mountain, the report said.

“No effective plans to reduce the height of the garbage mountain have been made,” the report said. Furthermore, “it should have proposed a long time ago that future dumping of garbage in them would pollute the groundwater systems,” the report added.

CNN sent a series of questions along with the data from the water testing questionnaire to India’s Environment and Health Ministries. There has been no response from the ministries.

In a 2019 report, the Indian government recommended ways to improve the country’s solid waste management, including formalizing the recycling sector and installing more compost plants in the country.

While some improvements have been made, such as better door-to-door garbage collection and processing of waste, Delhi’s landfills continue to accumulate waste.

In October, the National Green Tribunal fined the state government more than $100 million for failing to dispose of more than 30 million metric tonnes of waste across its three landfill sites.

“The problem is Delhi doesn’t have a concrete solid waste action plan in place,” said Singh from the CSE. “So we are talking here about dump site remediation and the treatment of legacy waste, but imagine the fresh waste which is generated on a regular basis. All of that is getting dumped everyday into these landfills.”

“(So) let’s say you are treating 1,000 tons of legacy (waste) and then you are dumping 2,000 tons of fresh waste every day it will become a vicious cycle. It will be a never ending process,” Singh said.

“Management of legacy waste, of course, is mandated by the government and is very, very important. But you just can’t start the process without having an alternative facility of fresh waste. So that’s the biggest challenge.”