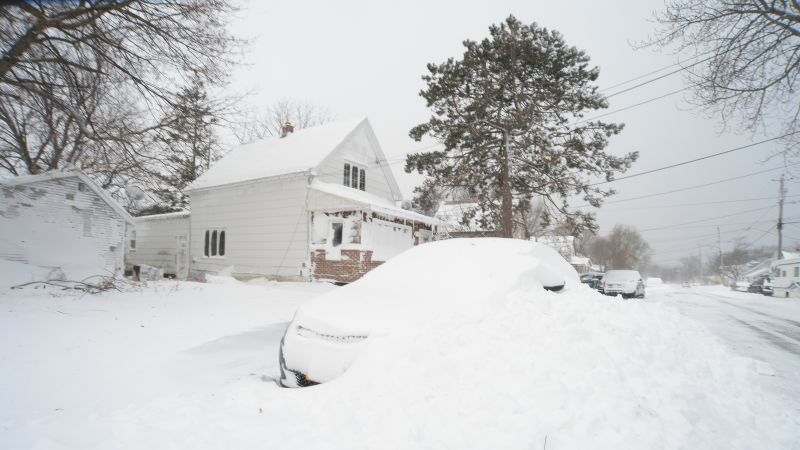 A nearly weeklong winter storm blasting much of the US has plunged temperatures to life-threatening lows, brought blizzards and floods, and left more than a quarter million people without power on Christmas Day.

Blizzard conditions continue across the Great Lakes, while frigid cold temperatures grip the eastern two-thirds of the US, with some major cities in the Southeast, Midwest and East Coast recording their coldest Christmas in decades.

Large areas of the central and eastern US remain under wind chill warnings and advisories, as freeze warnings are in effect across the South.

New York City saw record cold temperatures on Christmas Eve at several locations, including its JFK and LaGuardia airports. The high at Central Park was 15 degrees, marking its second-coldest December 24 in at least 150 years, according to the National Weather Service.

At least 22 deaths have been attributed to dangerous weather conditions since Wednesday, and some residents in the Northeast are spending the holiday without sufficient heat or hot water as extremely cold temperatures persist.

Across the US, 275,856 homes and businesses in the US had no electricity service as of 1 a.m. ET, many of them in Maine and New York, according to PowerOutage.us. Since the start of the storm the number of outages has at times exceeded a million customers.

A power grid operator for at least 13 states in the country’s eastern half asked customers to conserve power and set thermostats lower than usual from early Saturday to 10 a.m. on Sunday because usage was straining capacity.

The operator, PJM Interconnection, serves about 65 million people in all or parts of Delaware, Illinois, Indiana, Kentucky, Maryland, Michigan, New Jersey, North Carolina, Ohio, Pennsylvania, Tennessee, Virginia, West Virginia, and the District of Columbia, and warned rolling blackouts could happen if the strain becomes too much.

Meanwhile, a shortage of electricity in Texas prompted the US Department of Energy to declare an emergency Friday, allowing the state’s energy provider to exceed environmental emissions standards until energy usage drops.

In Jackson, Mississippi, frigid temperatures are hampering efforts to repair a large water main break late Saturday, which has caused a loss in water pressure for residents, city officials said.

“We are grateful to the crews who are braving these frigid temperatures on this Christmas Eve night, while working to restore pressure to residents. Their sacrifice does not go unnoticed and is appreciated not only by this administration, but also by every resident who is affected,” the release stated.

Conditions on the road weren’t any better in parts of the country amid whiteout conditions and icy and snow-covered roadways.

In New York’s Erie County – which is seeing blistering blizzard conditions – about 500 motorists found themselves stranded in their vehicles Friday night into Saturday morning, despite a county driving ban put in place during the storm, according to County Executive Mark Poloncarz.

National Guard troops were called in to help “rescue people that are stuck in vehicles,” and to give rides to medical workers so they could relieve colleagues who had been working at hospitals for more than a day, Poloncarz said.

In Seattle, Washington, online videos have documented cars sliding on the icy roads and bumping into each and residents slipping as they walked on sidewalks, CNN affiliate KOMO reported.

New York Gov. Kathy Hochul said she will ask the federal government for a declaration of emergency after a blistering winter storm.

“I’ll be asking the federal government for a declaration of emergency that’ll allow us to seek reimbursements for the extraordinary expenses of all the overtime and the fact that we brought in mutual aid from other parts of the state,” Hochul said to reporters Saturday. “We’ve deployed individuals – the utility crews have come but also making sure that we have all the vehicles we need.”

“The loss of two lives in Buffalo – storm related – because people were not able to get to medical attention, is again a crisis situation that unfolds before your eyes and you realize that lifesaving ambulances and emergency medical personnel cannot get to people during a blizzard situation,” Hochul added.

Other storm-related deaths have been reported in the country. They include:

• Colorado: Police in Colorado Springs, Colorado, reported two deaths related to the cold since Thursday, with one man found near a power transformer of a building possibly looking for warmth, and another in a camp in an alleyway.

• Kentucky: Three people have died in the state, officials have said, including one involving a vehicle accident in Montgomery County.

• Missouri: One person died after a caravan slid off an icy road and into a frozen creek, Kansas City police said.

• Ohio: Eight people have died as a result of weather-related auto accidents, including four in a Saturday morning crash on Interstate 75, when a semi tractor-trailer crossed the median and collided with an SUV and a pickup, authorities said.

• Tennessee: The Tennessee Department of Health on Friday confirmed one storm-related fatality.

In pictures: Winter storm impacts the US

The storm system is forecast to gradually weaken as it lifts into southeastern Canada, moving slowly during the next couple of days and pulling arctic air from Canada down into much of the eastern side of the country.

The Arctic blast being felt across the eastern two-thirds of the nation will slowly moderate into Monday, but dangerous conditions will persist Christmas Day.

The cold temperatures combined with dangerous wind chills will create a potentially life-threatening hazard for travelers who become stranded, people who work outside, livestock and pets, according to the National Weather Service.

“In some areas, being outdoors could lead to frostbite in minutes,” the Weather Service warned.

As the frigid air continues to blast the warm waters of the Great Lakes, lake-effect snows and blizzard conditions are expected to continue, but slowly become less intense.

Still, strong gusty winds initially up to 60 mph accompanying the snow downwind from the Great Lakes will continue to make for extremely dangerous conditions on the road.

By Christmas night into Monday, another low pressure system coming from the Pacific will deliver the next surge of moisture toward the Pacific Northwest and then into northern California, according to the Weather Service.