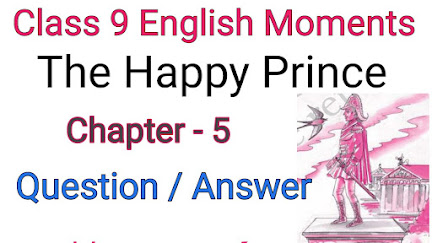 Question 1:Why did the Swallow cry when the Happy Prince asked him to pluck out one of the sapphires? (SA-1, DDE-2014)

Answer:The swallow cried when the Prince asked him to pluck out one of the sapphires because the Prince would go blind. The Prince himself suffered too much so as to help the poor and needy people.

Answer:The little swallow was going to Egypt to join his friends. The Happy Prince looked so sad that the swallow decided to stay back and be his messenger. The swallow died helping the happy Prince in the service of poor people.

Answer:The drops of rain were actually the Happy Prince’s tears. The Happy prince was sad and moved by the widespread poverty and misery. He had always seen happiness around him. He could not fathom that people were sick and crying because of the misery around them.

Question 4:Describe the statue of the Happy Prince as described in the beginning of the story ?(Board Term 1,2012, ELI-014)

Answer:At the beginning of the story the statue was fixed on a tall column, full of thin leaves of gold on the body, and had two sapphires for eyes. It had a large red ruby fixed on the hilt of the sword.

Answer:As per the orders of the Happy Prince, the gold leaves and the jewels on his boy were taken out by the swallow and distributed among the poor. Thus, the Happy Prince was able to help the poor children in the city.

Answer:The two most precious things were the leaden heart of the Happy Prince and the dead swallow. The former wept for the poor and helped them by giving sapphires, gold leave and ruby. While the latter helped the prince in his noble cause and sacrificed her life while staying with him.

Answer:The Happy Prince asked the swallow to take the ruby out of his sword, where it was hidden and give it to the seamstress, whose son was lying on the bed with fever. The swallow took the ruby and placed it on the table.

Question 8:How did the prince and the swallow enable the playwright to finish his work ?(Board Term 1,2012, ELI-022)

Answer:The playwright was very poor. He could not buy food and firewood. It was difficult for him to write a play without food and firewood. The Prince took pity on him and decided to help him by sending the sapphires with the help of the swallow.

Answer:The drops of rain were actually tears of the Happy Prince because he was weeping on seeing the misery and suffering of the people.

Answer:When the ‘Happy Prince’ was alive, he did not know what tears and sorrow were. After his death, he could see the ugliness and misery of the city. Therefore, he weeps and is not really happy.

Answer:The Happy Prince looked so sad that the little swallow felt sorry for him. He agreed to stay with him for one night and be his messenger. He picked out the great ruby from the prince’s sword and flew away to deliver it to the poor woman.

Answer:The moral of the story is that we must help the poor and the needy. The prince set an example of this by giving his jewels to the poor. The swallow also proved to be a great example of love and sacrifice.

Answer:When the little swallow was getting ready to sleep a large drop of water fell on him. It was the Prince crying on seeing the misery and suffering of the people.

Answer:The Happy Prince ordered the swallow to pluck one of his eyes which were made of sapphire and take it to the man living in the garret who was very poor and could not write with an empty stomach.

For any query just drop down a comment below…