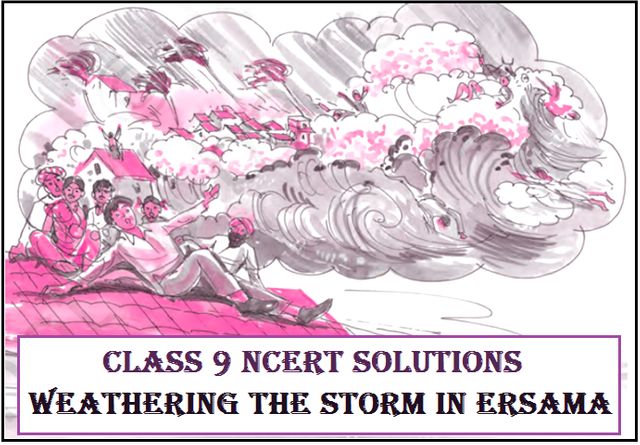 Question 1.What havoc has the super cyclone wrecked in the life of the people of Orissa?

Answer:It was a devastating storm that washed the houses away and destroyed hundreds of villages. It killed thousands of people and uprooted a large number of trees. There were dead bodies all around. People became homeless and many children who had lost their parents became orphans. This crazed destruction continued for the next thirty-six hours. The condition seemed grim after the super cyclone.

Question 2.How has Prashant, a teenager, been able to help the people of his village?

Answer:On reaching his village, Prashant found deplorable conditions all around him. He had leadership qualities so he took the initiative to rehabilitate people. He made a team of young volunteers and cleaned urine, filth, vomit, and floating carcasses. His team was fully dedicated to serve others. He persuaded grief-stricken women to look after children. In this way, he became a ray of hope for all.

Question 3.How have the people of the community helped one another? What role do the women of Kalikuda play during these days?

Answer:Prashant took the initiative and mobilized everyone to help one another. In this time of distress, the people of the community joined hands together and started relief work. Women started working in the food for work programme and looked after the orphans.

Question 4.Why do Prashant and other volunteers resist the plan to set up institutions for orphans and widows? What alternatives do they consider?

Answer:Prashant and other volunteers resisted the plan as they felt that it would not be proper to set up separate institutions for orphans and widows. The group of volunteers was of the opinion that in these institutions children would not be able to get love and widow would suffer from stigma, loneliness, and isolation. The group decided to rehabilitate them in their own community. New families were made and the childless widows took care of the orphan.

Question 5.Do you think Prashant is a good leader? Do you think young people can get together to help people during natural calamities?

Undoubtedly, Prashant is a good leader. He has all the qualities of a leader. He has the special quality of taking initiative. His vision is quite clear. He faces adverse circumstances courageously. He is a source of energy for others and has great motivational power. I think that youth is power. This power can be used to assist society during natural disasters. Whatever job is assigned to the youth in such circumstances they perform their duty with full spirit.

Question 1.Talk about the preparedness of the community for a natural disaster.(You can talk about evacuation plans and rehabilitation; permanent safe shelters; warning system; relief efforts; building materials to withstand cyclone/flood/ earthquake, i.e. safe housing; peoples’ organisation of their own rescue; the survival instinct, etc.)

Answer:We are part of the community. Natural calamities may occur at any time. We have witnessed many such natural disasters which caused devastation all around. The occurrence of such calamities is not under our control but preparing ourselves to face such devastation is under our control. If precautions are taken timely, the effects of such calamities may be reduced. For this purpose we should adopt the following points and discuss them :