The NCERT Exemplar solutions for class 9 science is very important in the examination. NCERT Exemplar Solutions for Class 9 Science Chapter 15 Improvement in Food Resources is provided by our experts. They prepared the best solutions which help the students in understanding the solutions in an easy way. This chapters also covers the other topics like Soil Erosion, wrong agricultural practices, immediate condensation, rainfall pattern, pollution of water and soil, deforestation, afforestation and conservation of natural resources.

1. Which one is an oil yielding plant among the following?
(a) Lentil
(b) Sunflower
(c) Cauliflower
(d) Hibiscus

Lentils are pulse yielding plants. Cauliflower is a vegetable and hibiscus is a flower. Sunflower is used to make oil.

Rice, millets and sorghum has carbohydrates in them as a major source of energy. Whereas gram is a dicotyledonous seed and is rich in proteins.

(d) None of the above

4. To solve the food problem of the country, which among the following is necessary?
(a) Increased production and storage of food grains
(b) Easy access of people to the food grain
(c) People should have money to purchase the grains
(d) All of the above

(d) All of the above

6. Weeds affect the crop plants by :
(a) killing of plants in field before they grow
(b) dominating the plants to grow
(c) competing for various resources of crops (plants) causing low availability of nutrients
(d) All of the above

Few weeds are poisonous but they do not affect the crop plant. Weeds compete for the nutrients and water available in the soil. This makes the crop plant devoid of nutrients eventually leading to decrease of the crop yield.

7. Which one of the following species of honey bee is an Italian species?
(a) Apis dorsata
(b) Apis florae
(c) Apis cerana indica
(d) Apis mellifera

8. Find out the correct sentence about manure :
(i) Manure contains large quantities of organic matter and small quantities of nutrients.
(ii) It increases the water holding capacity of sandy soil.
(iii) It helps in draining out of excess of water from clayey soil.
(iv) Its excessive use pollutes environment because it is made of animal excretory waste.
(a) (i) and (iii)
(b) (i) and (ii)
(c) (ii) and (iii)
(d) (iii) and (iv)

Bos domestica is found in Africa and Bos vulgaris does not belong to Bos family.

Hens do not produce milk and they are not reared for the purpose of feathers.

13. Poultry fowl are susceptible to the following pathogens:
(a) Viruses
(b) Bacteria
(c) Fungi
(d) All of these

Viruses, bacteria and fungi cause diseases in poultry.

14. Which one of the following fishes is a surface feeder?
(a) Rohus
(b) Mrigals
(c) Common carps
(d) Catlas

16. Which one of the following nutrients is not available in fertilizers?
(a) Nitrogen
(b) Phosphorus
(c) Iron
(d) Potassium

Plants obtain iron from the soil. There is no fertilizer that can provide iron for the plants.

17. Preventive and control measures adopted for the storage of grains include :
(a) strict cleaning
(b) proper disjoining
(c) fumigation
(d) All of these

20. What is a GM crop? Name any one such crop which is grown in India.

Those crops which have been developed by the introduction of a new gene with a desired trait from a bacterium to modify/improve the crop’s original characters are called genetically modified crops (GM) crops.
Example: BT cotton which is made insect resistant by introducing a new gene from a bacteria.

Some useful traits in improved crop are:

22. Why is organic matter important for crop production?

The importance of organic matter for crop production are :

23. Why is excess use of fertilizers detrimental for environment?

Excessive of fertilizers causes environmental pollution because when used in excess quantities, their residual and unused amounts will pollute air, water and soil.This can result in the development of pollution by contaminating water, air, and soil present in the surrounding.

(a) Farming without the use of chemicals as fertilizers, herbicides and pesticides is known as organic farming.

(b) Growing of wheat and groundnut on the same field is called as mixed cropping.

(c) Planting soybean and maize in alternate rows in the same field is called intercropping.

(d) Growing different crops on a piece of land in pre-planned succession is known as crop rotation.

(e) Xanthium and Parthenium are commonly known as weeds.

(f) The causal organism of any disease is called pathogen.

26. If there is low rainfall in a village throughout the year, what measures will you suggest to the farmers for better cropping ?

The village needs to take necessary measure responsible for water conservation. Some suggestions are:

28. Define the term hybridization and photoperiod.

(a) A total of 16 nutrients are essential to plants.

(b) Carbon dioxide and oxygen are supplied by air to plants.

(c) Hydrogen is supplied by water to plants.

(e) 6 nutrients are required in large quantity and called macronutrients.

(f) 7 nutrients are needed in small quantity for plants and are called micronutrients.

32. Differentiate between compost and vermicompost.

Compost formation is the process in which farm waste materials like livestock excreta, vegetable wastes, animal refuse, domestic waste, straw, eradicated weeds are decomposed and used as manure while Vermicompost is the compost prepared from organic matter by using earthworm which hastens the process of decomposition.

The correct sequence of preparation of green manure is as follows:

(b) Green plants are cultivated for preparing manure or crop plant parts are used.

(c) Plants are ploughed and mixed into the soil.

(a) Green plants are decomposed in soil.

34. An Italian bee variety A. mellifera has been introduced in India for honey production. Write about its merits over other varieties.

The merits of Italian bee variety (A. mellifera) are as follows :

36. Discuss the role of hybridisation in crop improvement.

Hybridization refers to the crossing of genetically two dissimilar plants. Various types of hybridisation methods are be Inter-varietal, intra-varietal, inter- specific, and inter-generic. To obtain a new crop having all the desired characters of both the crops, the crops with desired characters are selected and cross breeding is done. This method of hybridisation improves crops with respect to yield, disease resistance, pest resistance etc.

(i) Vermicomposts: Compost is a type of manure which is rich in organic matter and nutrients. Vermicompost is the compost prepared by using earthworms to hasten the process of decomposition of plantsand animals refuse.

(ii) Green manures: Green manure is the manure prepared by decomposing green plants in field itself.
For example: sun hemp is grown in fields, mulched by ploughing and allowed to decompose in field for the preparation of green manure.

These methods are highly beneficial for productivity and are environment friendly in nature.

The various modes of controlling weeds are:

(iii) Bee-keeping is the practice through which yielding of honey is focused whereas poultry farming is a practice which is done to raise the domestic fowl for the production of eggs and meat.

40. Give the merits and demerits of fish culture.

41. What do you understand by composite fish culture?

Composite fish culture is the method to culture five or six species, both indigenous and exotic, together in a single fishpond. The species are so selected that they do not compete among themselves for food, i.e. they havedifferent types of food habits.
For example: Catlas are surface feeders, Rohu is middle zone feeder and Mrigals and common carps are bottom feeders.

42. Why bee-keeping should be done in good pasturage?

Bee-keeping is known as apiculture. To produce honey, bees need quality nectar. A good pasturage consists of plenty of flowers which can be used by bees to get quality nectar. This increases the quality as well as the quantity of the bees. If the bees are confined to a single variety of flower for nectar, the honey quality will have similar taste and consistency. Few plants like banana, peach, citrus, guava, sunflower, berries mango plum, etc. are good sources of both nectar and pollen.

43. Write the modes by which insects affect the crop yield.

There are various parts of plant bodies for insects which can be leaves, flowers, fruits and stems. They cause damage to the plant body and even to the fruits. Thus, this leads to heavy loss for farmers and cultivators. The various ways through which insects can damage crops are as follows :

The various environmental impacts if used excessively are:

45. Name two types of animal feed and write their functions.

Livestock feeds are the feeds which provide the basic nutrients required by the animals along with the various nutrient supplements beneficial for their growth and development. These supplements include nutrients like macro, micro, minerals, vitamins, proteins, and amino acids.

The two types of animal feeds are:

The only difference in between roughage and concentrates is the feeding quantity. Concentrates being compressed with equivalent source of energy and nutrients, it is provided in a maintained quantity. However, roughages comprising of more indigestible fibrous elements are provided in good amount.

47. Suggest some preventive measures for the diseases of poultry birds.

Poultry birds usually suffer from various bacterial and viral diseases. When such diseases turn out to be epidemic, then they are known as bird flu. Some of the preventive measures which could be implied on poultry farms are as follows :

48. Figure 15.1 shows the two crop fields [Plots A and B] have been treated by manures and chemical fertilizers respectively, keeping other environmental factors same. Observe the graph and answer the following questions.
(a) Why does plot B show sudden increase and then gradual decrease in yield?
(b) Why is the highest peak in plot A graph slightly delayed?
(c) What is the reason for the different pattern of the two graphs? 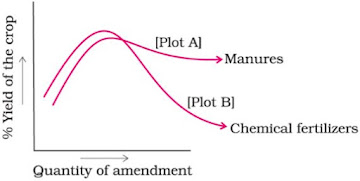 (a) There is sudden increase in yield with addition of chemical fertilizer. This happens due to release of nutrients N, P, Ketc. in high quantity. The gradual decline may be due to continuous use and high quantity of chemicals. This kills the useful microbes necessary for replenishing the organic matter in the soil. This decreases the soil fertility.

(b) Manures supply small quantities of nutrients to the soil slowly. This is because they contains large amounts of organic matter. Manures increase the soil fertility continuously as they enrich the soil with nutrients.

(c) The difference in the two graphs indicates that the use of manure is beneficial as the yield tends to remain high. In case of Plot B it is seen that the chemical fertilizers can cause various problems if used continuously for long time. Loss of microbial activity reduces the decomposition of organic matter and as a result soil fertility is lost which in turn affects the yield. 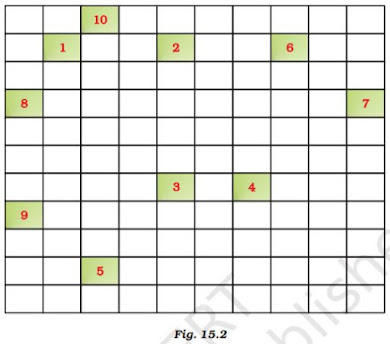 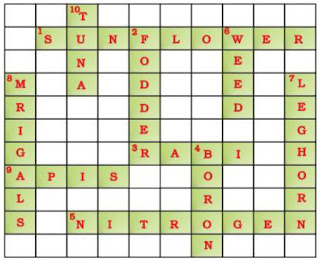