NCERT Exemplar Solutions for Class 9 Science Chapter 5 The Fundamental Unit of Life covers all the important questions and answers as well as advanced level questions. It helps in learning about the structure of units that make living organisms, unicellular organisms, multicellular organisms, Structure of a cell, cell organelles, plasma membrane, nucleus and cytoplasm.

The NCERT Exemplar solutions for class 9 science is very important in the examination. NCERT Exemplar Solutions for Class 9 Science Chapter 5 The Fundamental Unit of Life is provided by our experts. They prepared the best solutions which help the students in understanding the solutions in an easy way. This chapters also covers the other topics like rough Endoplasmic reticulum (RER), smooth Endoplasmic reticulum (SER), lysosomes, vacuoles, bacteria, fungi, plastids, chromoplasts, chloroplasts and leucoplast.

Viruses are considered to be intermediates between living and non-living. This is because they cannot metabolize or reproduce on their own. Moreover, virus requires a host for all its processes. Viruses can be stored as crystal like chemicals. Virus crystals are collection of millions of virus cells.

(c) It can be the site of energy generation.

Energy is produced in the mitochondria.

(b) Shrinkage of cytoplasm in hypertonic medium

Living plant cell loses water through the process of osmosis. This results in shrinking or contraction of the contents of the cell away from the cell wall. This is known as plasmolysis. When a plant cell has more water content than the surrounding, the plant cell tends to transfer water to its surroundings.

8. Which of the following are covered by a single membrane?
(a) Mitochondria
(b) Vacuole
(c) Lysosome
(d) Plastid

9. Find out the false sentences :
(a) Golgi apparatus is involved with the formation of lysosomes.
(b) Nucleus, mitochondria and plastid have DNA; hence, they are able to make their own structural proteins.
(c) Mitochondria is said to be the powerhouse of the cell as ATP is generated in them.
(d) Cytoplasm is called as protoplasm.

(a) Golgi apparatus is involved with the formation of lysosomes.

(a) Enzymes packed in lysosomes are made by RER (rough endoplasmic reticulum).

RER has ribosomes present on its surface. These ribosomes are responsible for the synthesis of proteins and enzymes.

11. Which cell organelle plays a crucial role in detoxifying many poisons and drugs in a cell?
(a) Golgi apparatus
(b) Lysosomes
(c) Smooth endoplasmic reticulum
(d) Vacuoles

SER plays an important role in detoxifying many poisons and drugs in the liver cells of vertebrates.

12. The proteins and lipids, essential for building the cell membrane, are manufactured by :
(a) rough endoplasmic reticulum
(b) golgi apparatus
(c) plasma membrane
(d) mitochondria

Endoplasmic reticulum plays important role in the production of both lipids and proteins. SER produces proteins and RER produces lipids.

13. The undefined nuclear region of prokaryotes are also known as :
(a) nucleus
(b) nucleolus
(c) nucleic acid
(d) nucleoid

Golgi apparatus is involved in the packaging and transport of many biomolecules such as proteins, lipids and carbohydrates.

15. Which out of the following is not a function of vacuole?
(a) Storage
(b) Providing turgidity and rigidity to the cell
(c) Waste excretion
(d) Locomotion

Vacuoles are responsible for storage, turgidity and rigidity of the cell and waste excretion. Locomotion is carried out by specialised organelles present outside cytoplasm. Vacuoles are present inside the cytoplasm.

The process of taking in of matter by a living cell by invagination of its membrane to form a vacuole is known as endocytosis. In endocytosis, substances that are external to a cell are brought into the cell.

17. Cell wall of which one of these is not made up of cellulose?
(a) Bacteria
(b) Hydrilla
(c) Mango tree
(d) Cactus

Hydrilla, mango tree and cactus are plants and thus their cell wall is made up of cellulose. The cell wall of bacteria is made of polysaccharide.

20. Kitchen of the cell is :
(a) mitochondria
(b) endoplasmic reticulum
(c) chloroplast
(d) golgi apparatus

Food in plants is produced inside chloroplast.

22. Cell arises from pre-existing cell was stated by :
(a) Haeckel
(b) Virchow
(c) Hooke
(d) Schleiden

(a) Schleiden and Schwann

The cell theory which stated that all plants and animals are made up of cell and cell is the basic unit of life was proposed by Schleiden and Schwann.

24. The only cell organelle seen in prokaryotic cell is :
(a) mitochondria
(b) ribosomes
(c) plastids
(d) lysosomes

25. Organelle without a cell membrane is :
(a) ribosome
(b) Golgi apparatus
(c) chloroplast
(d) nucleus

Golgi bodies, chloroplast and nucleus are all membrane bound organelles but ribosomes are organelles without membrane.

The main functions of golgi apparatus are secretion, packaging and modification of proteins. It is also involved in the synthesis of new membranes and lysosomes.

Robert hook observed cells first but he observed the dead cork cell. It was Leeuwenhoek who observed living cell from his microscope.

29. Select the odd one out
(a) The movement of water across a semipermeable membrane is affected by the amount of substances dissolved in it.
(b) Membranes are made of organic molecules like proteins and lipids.
(c) Molecules soluble in organic solvents can easily pass through the membrane.
(d) Plasma membranes contain chitin sugar in plants.

30. Why are lysosomes known as ‘suicide-bags’ of a cell?

31. Do you agree that “A cell is a building unit of an organism.” If yes, explain why?

Yes, the cells are the building units of an organism. Cells which perform similar functions join together to form tissues which further forms organs and organ systems.

This forms an organism. In a unicellular organism, a single cell performs all the life processes.

32. Why does the skin of your finger shrink when you wash clothes for a long time?

Soap solution is hypertonic in nature. This makes the water move out of the cells which in turn result in shrinking of fingers when you wash clothes for a long time.

33. Why is endocytosis found in animals only?

As cell wall is absent in animals, endocytosis is found only in animals. Because of this the movement of substances inside the cell is easier in animals than in plants.

34. A person takes concentrated solution of salt, after sometime, he starts vomiting. What is the phenomenon responsible for such situation? Explain.

Upon consumption of concentrated salt solution, the process of osmosis process takes place which results in dehydration. This is the reason why a person vomits.

35. Name any cell organelle which is non-membranous.

The only non-membranous cell organelle is the ribosome.

36. We eat food composed of all the nutrients like carbohydrates, proteins, fats, vitamins, minerals and water. After digestion, these are absorbed in the form of glucose, amino acids, fatty acids, glycerol, etc. What mechanisms are involved in absorption of digested food and water?

Diffusion and osmosis are involved in absorption and digestion respectively. Water is absorbed through the process of osmosis. Fatty acids and glycerol are diffused through submissive transport mechanism. Active transport helps in the absorption of glucose, amino acids and some ions.

37. If you are provided with some vegetables to cook, you generally add salt into the vegetables during cooking process. After adding salt, vegetables release water. What mechanism is responsible for this?

38. If cells of onion peel and RBC are separately kept in hypotonic solution, what among the following will take place? Explain the reason for your answer.
(i) Both the cells will swell.
(ii) RBCs will burst easily while cells of onion peel will resist the bursting to some extent.
(iii) (i) and (ii) both are correct.
(iv) RBC and onion peel cells will behave similarly.

The hypotonic water surrounding the cell moves inside the cell. This leads to swelling of the cells. As RBCs do not have plasma membrane, they swell and burst easily. Plant cells have cell wall which prevents them from bursting.

39. Bacteria do not have chloroplast, but some bacteria are photoautotrophic in nature and perform photosynthesis. Which part of bacterial cell performs this?

Small vesicles associated with plasma membrane are present in bacteria. These vesicles have pigment which can trap sunlight to carry photosynthesis.

41. Write the name of different plant parts in which chromoplast, chloroplast and leucoplast are present.

43. How is a bacterial cell different from an onion peel cell?

44. How do substances like carbon dioxide (CO2) and water (H2O) move in and out of the cell?

45. How does amoeba obtain its food?

Amoeba obtains its food through the process of endocytosis. Amoeba has finger-like projections which fuse with the food particles to forma food vacuole. Inside the vacuole the complex food particles are broken down into simpler ones which are then diffused into the cytoplasm.

46. Name the two organelles in a plant cell that contain their own genetic material and ribosomes.

The two organelles in a plant cell that contain their own genetic material and ribosomes are chloroplast and mitochondria.

47. Why are lysosomes also known as “scavengers of the cells”?

48. Which cell organelle controls most of the activities of the cell?

Most of the activities of the cell are controlled by the nucleus.

(i) Leucoplasts are more common in roots of the plant.

(ii) Chloroplasts are more common in leaves of the plant.

(iii) Chromoplasts are more common in flowers and fruits.

Vacuoles not only store important material but they also contain a sap that gives turgidity to the cell, this is the reason why plant cells possess large-sized vacuole.

51. How are chromatin, chromatid and chromosomes related to each other?

(i) The cell loses water and shrinks if it contains higher water concentration than the surrounding medium. This is known as exosmosis.

(ii)The cell bursts if it has a lower water concentration than the surrounding medium. This process is known as endosmosis.

(iii) There is no change in the cell if a cell having equal water concentration to its surrounding medium.

53. Draw a plant cell and label the parts which :
(a) Determines the function and development of the cell.
(b) Packages materials coming from the endoplasmic reticulum.
(c) Provides resistance to microbes to withstand hypotonic external media without bursting.
(d) Is site for many biochemical reactions necessary to sustain life.
(e) Is a fluid contained inside the nucleus.

Following is the schematic diagram of plant cell containing the specific cell organelles as asked in the question :

(a) Nucleus determines the function and development of the cell.

(b) Golgi apparatus is the package material coming from the endoplasmic reticulum.

(d) Cytoplasm is a site for many biochemical reactions necessary to sustain life.

(e) Nucleoplasm is a fluid contained inside the nucleus. 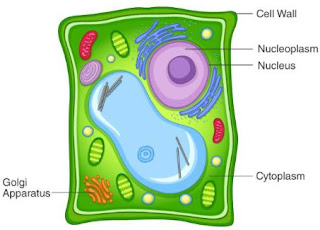 54. Illustrate only a plant cell as seen under electron microscope. How is it different from animal cell? 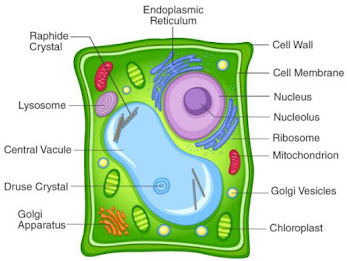 55. Draw a neat labelled diagram of an animal cell. 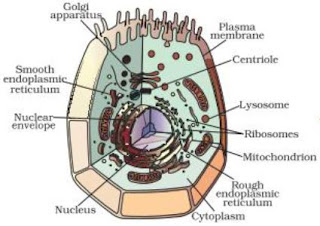 56. Draw a well labelled diagram of a eukaryotic nucleus. How is it different from nucleoid? 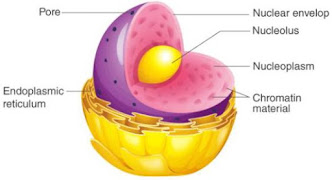 Difference between Nucleus and Nucleiod:

58. In brief state, what happens when :
(a) Dry apricots are left for sometime in pure water and later transferred to sugar solution?
(b) A Red Blood Cell is kept in concentrated saline solution?
(c) The Plasma-membrane of a cell breaks down?
(d) Rheo leaves are boiled in water first and then a drop of sugar syrup is put on it?
(e) Golgi apparatus is removed from the cell?

(a) When we put few dried raisins or apricots in plain water and leave them for some time, the cell gains water and swells. If we put the same seeds in a concentrated sugar solution, the seeds lose water, and consequently shrink.

(b) The red blood cells lose water when kept in concentrated saline solution and shrink consequently.

(c) The cell dies when the plasma membrane of a cell breaks down.

(d) The cells of rheo leaves are dead on boiling. If we put sugar solution on the dead leaves, there will be no intake of water due to lack of osmosis. Here the cell undergoes plasmolysis. This concludes that only living cells undergo osmosis.

(e) Removal of golgi apparatus stops the formation of vesicles and transport of proteins and lipids.

58. Draw a neat diagram of plant cell and label any three parts which differentiate it from animal cell. 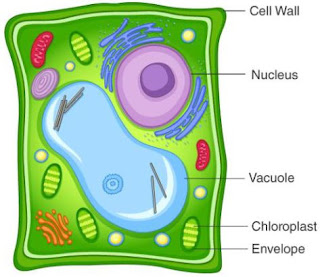