The NCERT Exemplar solutions for class 9 science is very important in the examination. NCERT Exemplar Solutions for Class 9 Science Chapter 4 Structure of the Atom is provided by our experts. They prepared the best solutions which help the students in understanding the solutions in an easy way. This chapters also covers the other topics like neutrons, proton, electron of an atom, isotopes, isobars, how are the electrons distributed in different shells, valence electrons, atomic number and mass number.

Atomic number of Mg is 12.Therefore the electronic distribution will be 1s22s22p63s2.

2. Rutherford’s ‘alpha (a ) particles scattering experiment’ resulted in to discovery of :
(a) Electron
(b) Proton
(c) Nucleus in the atom
(d) Atomic mass

(c) Nucleus in the atom

Rutherford’s ‘alpha (α) particles scattering experiment’ showed that few alpha particles returned to their original path. This showed the presence of nucleus in the centre.

5. Which of the following statements about Rutherford’s model of atom are correct?
(i) considered the nucleus as positively charged
(ii) established that the a-particles are four times heavy as a hydrogen atom
(iii) can be compared to solar system
(iv) was in agreement with Thomson’s model
(a) (i) and (iii)
(b) (ii) and (iii)
(c) (i) and (iv)
(d) Only (i)

10. Identify the Mg2+ ion from the fig. where, n and p represent the number of neutrons and protons respectively :

(c) Either metals or non-metals

Atomic number of Aluminium is 13. Therefore, the first shell can have maximum of 2 electrons and the second shell holds a maximum of 8 electrons.

16. Which of the following fig. do not represent Bohr’s model of an atom correctly?

(a) An atom has equal number of electrons and protons.

In an atom the number of protons is always equal to number of electrons.

18. Atomic models have been improved over the years. Arrange the following atomic models in the order of their chronological order :

19. Is it possible for the atom of an element to have one electron, one proton and no neutron? If so, name the element.

Yes, Hydrogen is the element which has only 1 proton and 1 electron and no neutron. Therefore there is no repulsive force in the nucleus and hence it is stable.
1 proton means atomic no. (Z) = 1
1 neutron means mass no. (A) = p + n = 1 + 1 = 2
1 electron and 1 proton mean that atom is electrically neutral.
Hence, the element is 11H (An isotop of Hydrogen – Deuterium)

20. Write any two observations which support the fact that atoms are divisible.

21. Will 35Cl and 37Cl have different valencies? Justify your answer.

No, 35Cl and 37Cl both are the isotopes of the same element hence they cannot have different valencies.
Both atoms have valency 1.

22. Why did Rutherford select a gold foil in his a-ray scattering experiment?

Gold is the most malleable metal and Rutherford wanted the thinnest layer. Therefore, Rutherford used gold for his scattering experiment as it is a heavy metal with high atomic number and it is highly malleable.

As atom (a) has 8 electron in its valence shell, it has zero valency.

Atom (b) has a valency of +1 as it has 7 electrons in it outermost shell. To achieve the octet configuration, atom (b) will accept 1 electron.

A cation is formed if an electron is removed from the outermost shell and the charge of the element will be +1.

25. Write down the electron distribution of chlorine atom. How many electrons are there in the L shell? (Atomic number of chlorine is 17.)

26. In the atom of an element X, 6 electrons are present in the outermost shell. If it acquires noble gas configuration by accepting requisite number of electrons, then what would be the charge on the ion so formed?

6 electrons are already present in the outermost orbital. In order to attain noble gas configuration the element has to accept two electrons. Therefore, the charge on an atom of element X is -2.

27. What information do you get from the fig. about the atomic number, mass number and valency of atoms X, Y and Z? Give your answer in a tabular form.

29. Calculate the number of neutrons present in the nucleus of an element X which is represented as 1531X.

31. The atomic number of calcium and argon are 20 and 18 respectively, but the mass number of both these elements is 40. What is the name given to such a pair of elements?

Isobars are elements with different atomic numbers but same mass numbers. Calcium and argon are isobars.

33. Helium atom has 2 electrons in its valence shell but its valency is not 2. Explain.

As Helium atom has 2 electrons in its outermost shell, its duplet is complete. Therefore the valency is zero.

35. An element X has a mass number 4 and atomic number 2. Write the valency of this element?

As the K shell is completely filled, valency is zero.

36. Why do helium, neon and argon have a zero valency?

37. The ratio of the radii of hydrogen atom and its nucleus is ~ 105. Assuming the atom and the nucleus to be spherical,

(i) what will be the ratio of their sizes?

Let R be the radius of the atom and r be that of the nucleus. 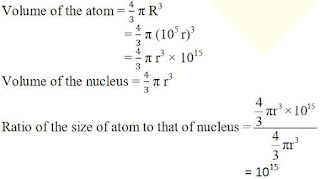 (ii) If the atom is represented by the planet earth (Re = 6.4×106m) then the radius of the nucleus would be

38. Enlist the conclusions drawn by Rutherford from his a-ray scattering experiment.

The following conclusions were made from the Rutherford α-particle scattering experiment:

Thomson’s model of an atom was similar to that of a christmas pudding. The electrons are studded like currants in a positively charged sphere like christmas pudding and the mass of the atom was supposed to be uniformly distributed.

40. What were the drawbacks of Rutherford’s model of an atom?

Rutherford’s model failed to explain the stability of the atom. Any particle in a circular orbit would undergo an acceleration and the charged particles would radiate energy. Thus, the revolving electron would lose energy and finally fall into the nucleus. In other words, the atom should collapse. 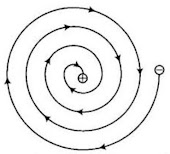 41. What are the postulates of Bohr’s model of an atom?

The postulates of Neils Bohr’s about the model of an atom are as follows:

42. Show diagrammatically the electron distributions in a sodium atom and a sodium ion and also give their atomic number. 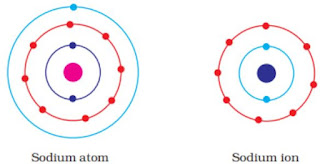 Number of particles that deflected at an angle less than 50°