The NCERT Exemplar solutions for class 10 science is very important for board exams. NCERT Exemplar Solutions for Class 10 Science Chapter 13 Magnetic Effects of Electric Current is provided by our experts. They prepared the best solutions which help the students in understanding the solutions in an easy way. This chapters also covers the other topics like electric motor, electromagnetic induction, Fleming’s right-hand rule, electric generator, electric power and domestic electric circuits.

2. If the key in the arrangement (Figure 13.1) is taken out (the circuit is made open) and magnetic field lines are drawn over the horizontal plane ABCD, the lines are
(a) concentric circles
(b) elliptical in shape
(c) straight lines parallel to each other
(d) concentric circles near the point O but of elliptical shapes as we go away from it 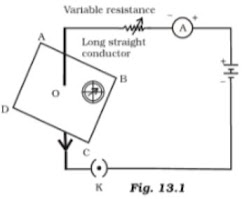 If key is taken out then current will stop and no magnetic field exists due to the conductor. Therefore, at the point O, there will be earth’s magnetic field and they will be straight lines parallel to each other. 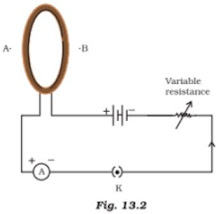 The direction of magnetic field line is from south to north pole. As the field lines are pointing form B to A, point A is indicating the north pole. 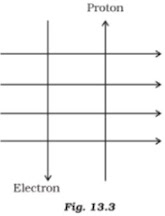 (a) forces both pointing into the plane of paper

(c) a permanent magnet to rotate the armature

In electric motors electromagnet is used instead of permanent magnet.

(d) there are momentary galvanometer deflections that die out shortly; the deflections are in opposite directions

When key is plugged in, the galvanometer shows deflection in one direction and the direction of deflection reverses if the key is unplugged.

(d) In India, the AC changes direction after every 1/50 second

AC frequency in India is 50 Hz. As the direction changes twice in each cycle so that change of direction takes place after every 1/00 second.

(b) directly below the wire

Using the right hand thumb rule, it can be found that the direction of magnetic field is from North to South below the wire.

10. The strength of magnetic field inside a long current carrying straight solenoid is
(a) more at the ends than at the centre
(b) minimum in the middle
(c) same at all points
(d) found to increase from one end to the other

(c) same at all points

(a) split-ring type commutator must be used

After each half turn, the split-ring type commutator reverse the direction of current. This maintains a DC current.

12. The most important safety method used for protecting home appliances from short circuiting or overloading is
(a) earthing
(b) use of fuse
(c) use of stabilizers
(d) use of electric meter

Fuse has a thin wire made of tin and lead in the ratio of 75: 25%. The fuse wire melts and breaks the circuit when current exceeds specified limit thereby protecting home appliances.

13. A magnetic compass needle is placed in the plane of paper near point A as shown in Figure 13.6. In which plane should a straight current carrying conductor be placed so that it passes through A and there is no change in the deflection of the compass? Under what condition is the deflection maximum and why?

14. Under what conditions permanent electromagnet is obtained if a current carrying solenoid is used? Support your answer with the help of a labelled circuit diagram.

Conditions in which a permanent electromagnet is obtained if a current carrying solenoid is used are:

15. AB is a current carrying conductor in the plane of the paper as shown in Figure 13.7. What are the directions of magnetic fields produced by it at points P and Q? Given r1 > r2, where will the strength of the magnetic field be larger?

At P into the plane of the paper and out of it at Q. The strength of the magnetic field is larger at Q as it is located closer.

16. A magnetic compass shows a deflection when placed near a current carrying wire. How will the deflection of the compass get affected if the current in the wire is increased? Support your answer with a reason.

The deflection of the magnetic compass increases because the strength of magnetic field is directly proportional to the magnitude of current passing through the straight conductor.

17. It is established that an electric current through a metallic conductor produces a magnetic field around it. Is there a similar magnetic field produced around a thin beam of moving
(i) alpha particles,
(ii) neutrons? Justify your answer.

(i) As alpha particles are positively charged, they constitutes current in the direction of motion.

(ii) Neutrons do not conduct electricity as the have no charge on them.

18. What does the direction of thumb indicate in the right-hand thumb rule. In what way this rule is different from Fleming’s left-hand rule?

19. Meena draws magnetic field lines of field close to the axis of a current carrying circular loop. As she moves away from the centre of the circular loop she observes that the lines keep on diverging. How will you explain her observation.

As the distance increases, the strength of the magnetic field falls. This is indicated by the decrease in degree of closeness of the lines of field.

20. What does the divergence of magnetic field lines near the ends of a current carrying straight solenoid indicate?

21. Name four appliances wherein an electric motor, a rotating device that converts electrical energy to mechanical energy, is used as an important component. In what respect motors are different from generators?

22. What is the role of the two conducting stationary brushes in a simple electric motor?

The brushes are connected to the battery and hence they draw current and supply it to the armature of the coil.

23. What is the difference between a direct current and an alternating current? How many times does AC used in India change direction in one second?

Direct current always flows in one direction whereas the alternating current reverses its direction periodically. The frequency of AC in India is 50 Hz and in each cycle it alters direction twice. Therefore AC changes direction 2×50 = 100 times in one second.

24. What is the role of fuse, used in series with any electrical appliance? Why should a fuse with defined rating not be replaced by one with a larger rating?

Fuse is used for protecting appliances during short-circuiting or overloading. The fuse is rated for a certain maximum current and the fuse wire melts when the current flowing through it exceeds the rated value. The appliance may get damaged, if a fuse is replaced by one with larger ratings because the fuse wire will not melt. Therefore, the practice of using fuse of improper rating should always be avoided.

25. Why does a magnetic compass needle pointing North and South in the absence of a nearby magnet get deflected when a bar magnet or a current carrying loop is brought near it. Describe some salient features of magnetic lines of field concept.

Current carrying loops act as bar magnets which have associated magnetic fields. These field lines change the existing earth’s magnetic field and cause a deflection.

Some salient features of magnetic lines of field are as follows: 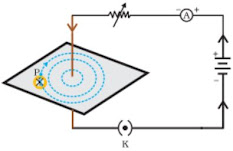 27. Explain with the help of a labelled diagram the distribution of magnetic field due to a current through a circular loop. Why is it that if a current carrying coil has n turns the field produced at any point is n times as large as that produced by a single turn?

Even in current carrying loop, the right hand thumb rule is obeyed. This shows that the magnetic field lines are present around the conducting wire. But the circular shape of conductor means that field lines at different points of the loop appear to be making ring around the periphery of the loop. This looks like small ring looping around big ring. 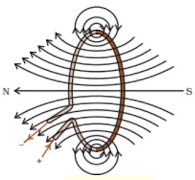 28. Describe the activity that shows that a current-carrying conductor experiences a force perpendicular to its length and the external magnetic field. How does Fleming’s left-hand rule help us to find the direction of the force acting on the current carrying conductor?

Activity that shows that a current-carrying conductor experiences a force perpendicular to its length and the external magnetic field: 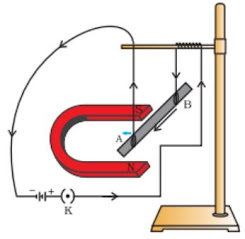 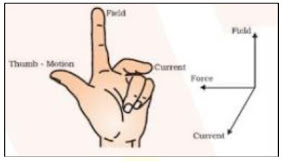 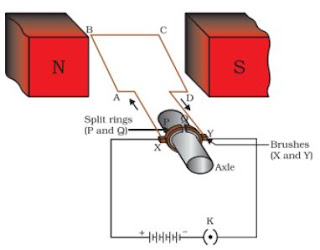 An electric motor consists of a coil ABCD placed between the two poles of a permanent magnet. The coil is placed in such a way that the direction of current is perpendicular to the direction of magnetic field.

When current flows from A to B, then the arm AB moves down according to the Flemings left hand rule. On the contrary, the arm CD of the coil moves up when current passes from C to D.

P of split ring touches brush Y when the coil completes half turn and the opposite happens with Q of split ring. Therefore, the direction of current gets reversed. That is the current now flows D to C and from B to A. This pushes the arm CD downwards and AB upwards. As a result the coil turns continuously.

30. Explain the phenomenon of electromagnetic induction. Describe an experiment to show that a current is set up in a closed loop when an external magnetic field passing through the loop increases or decreases.

Experiment to show that a current is set up in a closed loop when an external magnetic field passing through the loop increases or decreases:
Observation: 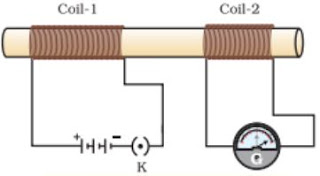 31. Describe the working of an AC generator with the help of a labelled circuit diagram. What changes must be made in the arrangement to convert it to a DC generator? 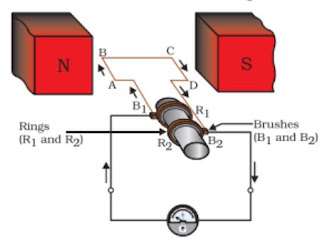 32. Draw an appropriate schematic diagram showing common domestic circuits and discuss the importance of fuse. Why is it that a burnt out fuse should be replaced by another fuse of identical rating?

Fuse is important for the following reasons:
Fuse of a particular rating is used with a particular appliance. A fuse with lower rating will need to be changed frequently, hence it would result in lot of inconvenience. A fuse with higher rating will not melt if the current exceeds the safety limit, hence it would not serve the purpose. Therefore, a burnt out fuse should be replaced by another fuse of identical rating.