The NCERT Exemplar solutions for class 9 science is very important in the examination. NCERT Exemplar Solutions for Class 9 Science Chapter 11 Work and Energy is provided by our experts. They prepared the best solutions which help the students in understanding the solutions in an easy way. This chapters also covers the other topics like law of conservation of energy, power and commercial unit of energy.

1. When a body falls freely towards the Earth, then its total energy :
(a) Increases
(b) Decreases
(c) Remains constant
(d) First increases and then decreases

Body falling freely towards the earth possesses the same kinetic and potential energy. This is because the body obeys the Law of conservation of energy.

(a) Does not change

4. An iron sphere of mass 10 kg has the same diameter as an aluminium sphere of mass is 3.5 kg. Both spheres are dropped simultaneously from a tower. When they are 10 m above the ground, they have the same :
(a) Acceleration
(b) Momentum
(c) Potential energy
(d) Kinetic energy

Momentum, potential energy and kinetic energy vary with weight. But here, the acceleration is due to acceleration due to gravity which is independent of mass.

6. Which one of the following is not the unit of energy?
(a) Joule
(b) Newton metre
(c) Kilowatt
(d) Kilowatt hour

7. The work done on an object does not depend upon the :
(a) Displacement
(b) Force applied
(c) Angle between force and displacement
(d) Initial velocity of the object

(d) Initial velocity of the object

Work done is the product of force and displacement. But work done is not dependent on initial velocity.

The energy stored in an object because of the position is known as the potential energy.

(c) Half potential and half kinetic energy

At height h/2, both potential energy and kinetic energy of the body will be half.

10. A rocket is moving up with a velocity v. If the velocity of this rocket is suddenly tripled, what will be the ratio of two kinetic energies? 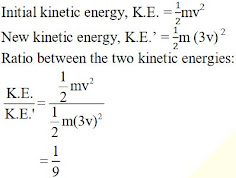 Therefore, the ratio between initial and final kinetic energy is 1:9.

As work equals to product of force and distance, you can write the equation for power in the following way, assuming that the force acts along the direction of travel :
Power = Work done/Time
But, work done = Force × distance
Therefore, P = W/t = F×s/t = Fv
where, s is the distance travelled and v is the speed.
Power of Avinash = 10 × 8 = 80 W
Power of kapil = 25 × 3 = 75 W
Therefore, Avinash is more powerful than Kapil.

12. A boy is moving on a straight road against a frictional force of 5 N. After travelling a distance of 1.5 km he forgot the correct path at a roundabout figure of radius 100 m. However, he moves on the circular path for one and half cycle and then he moves forward upto 2.0 km. Calculate the work done by him.

13. Can any object have mechanical energy even if its momentum is zero ? Explain.

Momentum is the product of mass and velocity. The velocity of a body is zero if the body is at rest. The body at rest at certain height possess gravitational potential energy. Therefore, an object can have mechanical energy even if its momentum is zero.

14. Can any object have momentum even if its mechanical energy is zero? Explain.

No, an object with zero mechanical energy cannot have momentum asits potential and kinetic energy are zero.

16. The weight of a person on a planet A is about half that on the Earth. He can jump up to 0.4 m height on the surface of the Earth. How high he can jump on the planet A?

17. The velocity of a body moving in a straight line is increased by applying a constant force F, for some distance in the direction of the motion. Prove that the increase in the kinetic energy of the body is equal to the work done by the force on the body.

18. Is it possible that an object is in the state of accelerated motion due to external force acting on it, but no work is being done by the force ? Explain it with an example.

20. If an electric iron of 1200 W is used for 30 minutes every day, find electric energy consumed in the month of April.

21. A light and a heavy object have the same momentum. Find out the ratio of their kinetic energies. Which one has a larger kinetic energy?

But, V1 > V2 [from (4)]
Therefore, (K.E.)l > (K.E.)h
‘The lighter one will have more kinetic energy than the heavy one. Moreover, Kinetic energy is directly proportional to the mass of the object.

22. An automobile engine propels a 1000 kg car (A) along a levelled road at a speed of 36 km h–1. Find the power if the opposing frictional force is 100 N. Now, suppose after travelling a distance of 200 m, this car collides with another stationary car (B) of same mass and comes to rest. Let its engine also stop at the same time. Now, car (B) starts moving on the same level road without getting its engine started. Find the speed of the car (B) just after the collision.

(b) The men did not do any work in just holding it because there is no displacement while holding the box. Therefore, the work done is zero.

(c) There is no displacement while holding the box. Therefore, the work done is zero.

25. What is power? How do you differentiate kilowatt from kilowatt hour? The Jog Falls in Karnataka state are nearly 20 m high. 2000 tonnes of water falls from it in a minute. Calculate the equivalent power if all this energy can be utilized? (g = 10 ms–2)

Difference between kilowatt and kilowatt hour