The NCERT Exemplar solutions for class 10 science is very important for board exams. NCERT Exemplar Solutions for Class 10 Science Chapter 4 Carbon and its Compounds is provided by our experts. They prepared the best solutions which help the students in understanding the solutions in an easy way. This chapters also covers the other topics like oxidation, combustion, addition reaction and substitution reaction,

1. Carbon exists in the atmosphere in the form of

Carbon compounds form covalent bonds and hence they have very weak forces of attraction. This is the reason why carbon compounds are poor conductors of electricity.

(a) only single bonds

4. Buckminsterfullerene is an allotropic form of
(a) phosphorus
(b) sulphur
(c) carbon
(d) tin

5. Which of the following are correct structural isomers of butane? 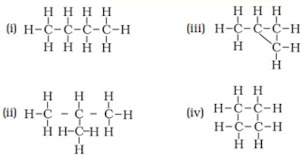 Chemical formula of Butane is C4H10.
Here, option iii) and iv) have 8 hydrogen atoms, hence they are wrong.

In the above given reaction, alkaline KMnO4 acts as
(a) reducing agent
(b) oxidising agent
(c) catalyst
(d) dehydrating agent

During oxidation of ethanol, two hydrogen atoms are replaced by one atom of oxygen. Potassium provides for the addition of oxygen.

7. Oils on treating with hydrogen in the presence of palladium or nickel catalyst form fats. This is an example of
(a) Addition reaction
(b) Substitution reaction
(c) Displacement reaction
(d) Oxidation reaction

As hydrogen is added to oil, hence it is an addition reaction.

8. In which of the following compounds, — OH is the functional group?
(a) Butanone
(b) Butanol
(c) Butanoic acid
(d) Butanal

Suffix ol in used for compound with OH functional group.

(a) hydrophilic head and a hydrophobic tail

As oil and grease have a hydrophobic tail, they get trapped inside a micelle. Hydrophobic head makes the outer surface of micelle. Hence micelle is easily washed by water.

10. Which of the following is the correct representation of electron dot structure of nitrogen ?

Nitrogen atoms get 8 electrons in structure shown in option (d) whereas in other options it is different.

11. Structural formula of ethyne is

Chemical formula of Ethyne is C2H2.

Propene and propyne have double and triple bond respectively. Hence they are unsaturated compounds.

(b) presence of sunlight

Chlorine reacts with hydrocarbons in the presence of sunlight and displaces hydrogen atoms.

A micelle is a spherical aggregate soap molecules in soap solution. In the soap micelles the ionic end of soap is on the surface of the cluster while the carbon chain is in the interior of the cluster.

16. Structural formula of benzene is 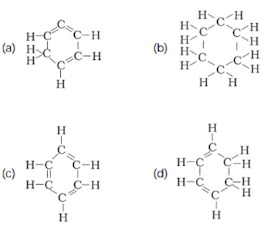 Chemical formula of Benzene is C6H6.

18. The correct structural formula of butanoic acid is

Solution
(c)
Option (c) represents complete octet configuration. Hence it is the right answer.
23. Which of the following is not a straight chain hydrocarbon? 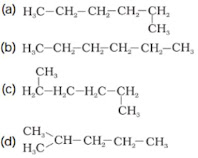 Electron dot structure and Structural formula of ethyne.
31. Write the names of the following compounds 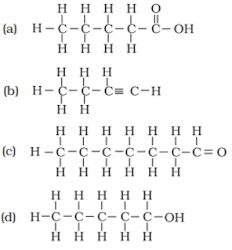 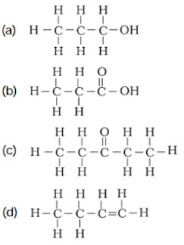 33. A compound X is formed by the reaction of a carboxylic acid C2H4O2 and an alcohol in presence of a few drops of H2SO4. The alcohol on oxidation with alkaline KMnO4 followed by acidification gives the same carboxylic acid as used in this reaction. Give the names and structures of

(a) carboxylic acid,
(b) alcohol and
(c) the compound X. Also write the reaction.

(a) Carboxylic acid is ethanoic acid.
(b) Alcohol is ethanol.

34. Why detergents are better cleansing agents than soaps ? Explain.
Solution
Detergents work as cleansing agent both in hard and soft water. The charged ends of the detergents do not form insoluble precipitates with calcium and magnesium ions in hard water.
35. Name the functional groups present in the following compounds

36. How is ethene prepared from ethanol? Give the reaction involved in it.

Heating ethanol with excess of concentrated sulphuric acid at 443 K results in the dehydration of ethanol. The product formed is ethane.

37. Intake of small quantity of methanol can be lethal. Comment.
Solution
In the liver, methanol is oxidised to methanal. Methanal reacts rapidly with the components of cells causing the protoplasm to coagulate. It also affects the optic nerve, causing blindness.
38. A gas is evolved when ethanol reacts with sodium. Name the gas evolved and also write the balanced chemical equation of the reaction involved.

Solution
Sulphuric acid acts as a catalyst and a dehydrating agent in the formation of ethene.

42. Catenation is the ability of an atom to form bonds with other atoms of the same element. It is exhibited by both carbon and silicon. Compare the ability of catenation of the two elements. Give reasons.
Solution
Because of the small size, carbon exhibits catenation much more than silicon or any other element. The small size makes the C–C bonds strong while the Si–Si bonds are comparatively weaker due to its large size.
43. Unsaturated hydrocarbons contain multiple bonds between the two C-atoms and show addition reactions. Give the test to distinguish ethane from ethene.
Solution

44. Match the reactions given in Column (A) with the names given in column (B).

45. Write the structural formulae of all the isomers of hexane.
Solution
Hexane can exhibit five isomers with molecular formula C6H14. 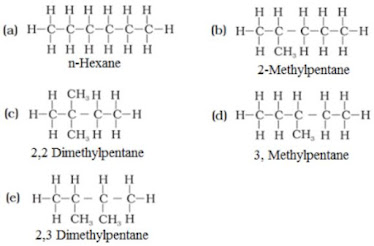 46. What is the role of metal or reagents written on arrows in the given chemical reactions?

47. A salt X is formed and a gas is evolved when ethanoic acid reacts with sodium hydrogen carbonate. Name the salt X and the gas evolved. Describe an activity and draw the diagram of the apparatus to prove that the evolved gas is the one which you have named. Also, write chemical equation of the reaction involved.
Solution
Ethanoic acid reacts with sodium hydrogen carbonate to produce sodium ethanoate and carbon dioxide gas.

(c) An atom/group of atoms joined in a specific manner which is responsible for the characteristic chemical properties of the organic compounds is known as a functional group.
Examples are hydroxyl group (–OH), aldehyde group (–CHO), carboxylic group (–COOH) etc.

(b) The process of converting esters into salts of carboxylic acids and ethanol by treating them with a base is known as saponification.

51. Esters are sweet-smelling substances and are used in making perfumes. Suggest some activity and the reaction involved for the preparation of an ester with well labeled diagram.

52.  A compound C (molecular formula, C2H4O2 ) reacts with Na – metal to form a compound R and evolves a gas which burns with a pop sound. Compound C on treatment with an alcohol A in presence of an acid forms a sweet smelling compound S (molecular formula, C3H6O2  ). On addition of NaOH to C, it also gives R and water. S on treatment with NaOH solution gives back R and A. Identify C, R, A, S and write down the reactions involved.
Solution
(I) Compound C is Ethanoic acid [Acetic acid]
It reacts with sodium metal to form a compound called R. R is Sodium Ethanoate.
2CH3COOH + 2Na → 2CH3COONa + H2
(II)

So compound S is Ester of Ethyl ethanoate and compound A is Ethanol
(III) CH3COOC2H5 + NaOH → CH3COONa + C2H5OH.
So, compound R is again Sodium Ethanoate.
So, compound C is Ethanoic acid
A is Ethanol
S is Ester R is sodium Ethanoate.
53. Look at Figure 4.1 and answer the following questions
(a) What change would you observe in the calcium hydroxide solution taken in tube B?
(b) Write the reaction involved in test tubes A and B respectively.
(c) If ethanol is given instead of ethanoic acid, would you expect the same change?
(d) How can a solution of lime water be prepared in the laboratory? 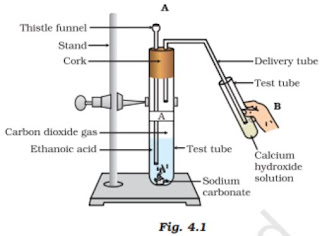 (d) By dissolving calcium oxide in water and decanting the supernatent liquid, lime water can be prepared.

54. How would you bring about the following conversions ? Name the process and write the reaction involved.
(a) ethanol to ethene.
(b) propanol to propanoic acid. Write the reactions.
Solution
(a) Dehydration of ethanol in the presence of concentrated H2SO4.

(b) (b) Oxidation of propanol using oxidising agent such as alkaline KMnO4.

55. Draw the possible isomers of the compound with molecular formula C3H6O and also give their electron dot structures.
Solution

The two possible isomers of the compound with molecular formula C3H6O are : 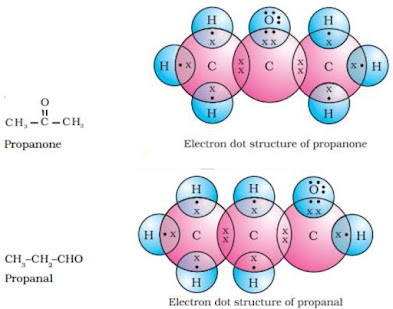 (b) On heating ethanol is oxidised to ethanoic acid in the presence of alkaline KMnO4.

(c) Chlorine is added to hydrocarbonsin the presence of sunlight.

(d) When Ester is treated with alkali, the reaction gives ethanol and Sodium ethanoate. This reaction is called saponification.
Example : CH3COOC2H5 + NaOH → CH3COONa + C2H5OH
(e) Combustion is the burning of a substance in presence of Oxygen.
Example: CH4 + O2 → CO2 + H2O + heat and light
57.  An organic compound A on heating with concentrated H2SO4 forms a compound B which on addition of one mole of hydrogen in presence of Ni forms a compound C. One mole of compound C on combustion forms two moles of CO2  and 3 moles of H2O. Identify the compounds A, B and C and write the chemical equations of the reactions involved.
Solution