NCERT Exemplar Solutions for Class 10 Science Chapter 10 Light- Reflection and Refraction covers all the important questions and answers as well as advanced level questions. It helps in learning about the Light, Normal rays, Incident rays, Reflected rays, Angle of incidence, angle of reflection, point of incidence and Laws of reflection.

The NCERT Exemplar solutions for class 10 science is very important for board exams. NCERT Exemplar Solutions for Class 10 Science Chapter 10 Light- Reflection and Refraction is provided by our experts. They prepared the best solutions which help the students in understanding the solutions in an easy way. This chapters also covers the other topics like Laws of refraction, characteristics of an image formed by the plane mirror, mirror formula, spherical mirrors and its types, lens, power of lens real image and inverted image.

The emergent rays are parallel when point source of a light is focused to a convex or concave mirror.

When object is placed between F and C an enlarged image is formed beyond C. 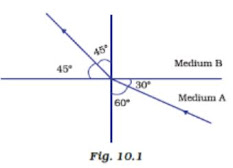 Refractive Index of B with respect to A

5.  A light ray enters from medium A to medium B as shown in Figure 10.2. The refractive index of medium B relative to A will be
(a) greater than unity
(b) less than unity
(c) equal to unity
(d) zero 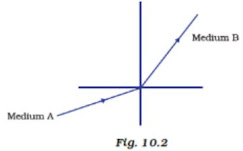 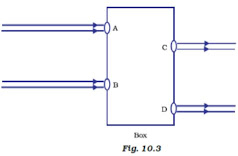 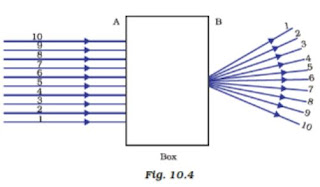 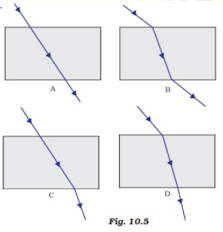 Solution
(b) B
When light passes from air to glass, it bends towards the normal and when light passes form glass to air it bends away from normal.
15. You are given water, mustard oil, glycerine and kerosene. In which of these media a ray of light incident obliquely at same angle would bend the most?
(a) Kerosene
(b) Water
(c) Mustard oil
(d) Glycerine
Solution
(d) Glycerine
The refractive indices of water, kerosene, mustard oil and glycerine are 1.33, 1.44, 1.46 and 1.47 respectively. Glycerine is optically the densest and hence a ray of light will bend more in glycerine.
16. Which of the following ray diagrams is correct for the ray of light incident on a concave mirror as shown in Figure 10.6?

Solution
(a) Fig. A
In a convex lens, the incident ray passing through F becomes parallel to the principal axis after refraction.
18. A child is standing in front of a magic mirror. She finds the image of her head bigger, the middle portion of her body of the same size and that of the legs smaller. The following is the order of combinations for the magic mirror from the top.
(a) Plane, convex and concave
(b) Convex, concave and plane
(c) Concave, plane and convex
(d) Convex, plane and concave
Solution
(c) Concave, plane and convex
When the object is between F and P of concave mirror enlarged image is formed behind the mirror. Hence, child can see her head bigger in a concave mirror. She can see her body size of the same size because plane mirror gives image of original size. Convex mirror gives diminished images and babies legs appear smaller.
19. In which of the following, the image of an object placed at infinity will be highly diminished and point sized?
(a) Concave mirror only
(b) Convex mirror only
(c) Convex lens only
(d) Concave mirror, convex mirror, concave lens and convex lens
Solution
(d) Concave mirror, convex mirror, concave lens and convex lens

21. Why does a light ray incident on a rectangular glass slab immersed in any medium emerges parallel to itself? Explain using a diagram.
Solution
When light ray enters denser medium from rarer medium it bends towards the normal. Again when this ray exists the second medium and enters the first, it ends away from the normal. In this case extent of bending of ray at opposite faces is the same, this is the reason why the emergent ray is parallel to the incident ray. 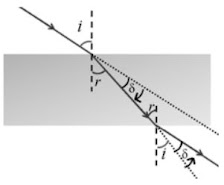 22. A pencil when dipped in water in a glass tumbler appears to be bent at the interface of air and water. Will the pencil appear to be bent to the same extent, if instead of water we use liquids like, kerosene or turpentine. Support your answer with reason.
Solution
The bending of light takes place because of refraction. Refraction dependents on refractive indices of the medium. The refractive indices of kerosene or turpentine will not be same as that of water. Therefore, the degree of bend will be different in different mediums.
23. How is the refractive index of a medium related to the speed of light? Obtain an expression for refractive index of a medium with respect to another in terms of speed of light in these two media?
Solution 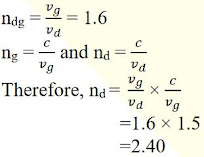 25. A convex lens of focal length 20 cm can produce a magnified virtual as well as real image. Is this a correct statement? If yes, where shall the object be placed in each case for obtaining these images?
Solution
When an object is placed at F and F2 of a convex lens, an inverted, enlarged and real image is formed beyond 2F2 i.e. on the other side of the lens. Therefore, we need to place the object between 20 and 40 cm of the lens. When an object is placed between F and O of a convex lens, an enlarged, erect and virtual image is formed beyond F2 i.e. on the same side of lens. Therefore, we need to place the object at a distance less than 20 cm from the lens.
26. Sudha finds out that the sharp image of the window pane of her science laboratory is formed at a distance of 15 cm from the lens. She now tries to focus the building visible to her outside the window instead of the window pane without disturbing the lens. In which direction will she move the screen to obtain a sharp image of the building? What is the approximate focal length of this lens?
Solution
Sudha will have to move the screen towards the lens in order to obtain a clear image of the building. The focal length of the lens will be approximately 15 cm. The ray of light coming from any distant object can be considered to be parallel. When parallel rays of light are incident on a convex lens, the rays, after refraction, converge at focus on the other side of the lens..
27. How are power and focal length of a lens related? You are provided with two lenses of focal length 20 cm and 40 cm respectively. Which lens will you use to obtain more convergent light?
Solution

P = 1/𝑓, P ∝1/𝑓. Therefore, the power of a lens is inversely proportional to its focal length. So, the lens having focal length of 20 cm will provide more convergence.

28. Under what condition in an arrangement of two plane mirrors, incident ray and reflected ray will always be parallel to each other, whatever may be angle of incidence. Show the same with the help of diagram.
Solution

The Incident ray and reflected ray will always be parallel to each other if two plane mirrors are placed perpendicular to each other. 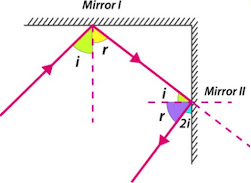 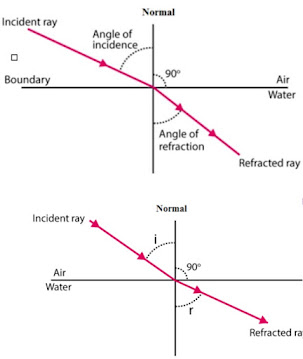 ABCD is a glass slab. The incident ray is incident on point O on air-glass interface.

Solution
(a) The ray diagram when the object is placed at the focus of the concave lens : 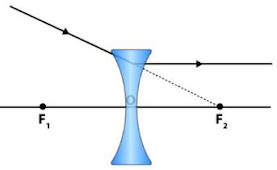 (b) The ray diagram when the object is placed between focus and twice the length of focal length of the lens : 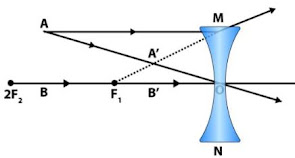 (c) Ray diagram when the object is beyond twice the focal length of the concave lens: 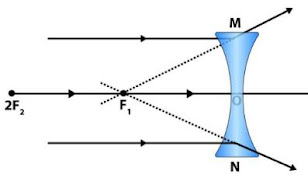 34. Draw ray diagrams showing the image formation by a convex mirror when an object is placed (a) at infinity
(b) at finite distance from the mirror
Solution
(a) At Infinity 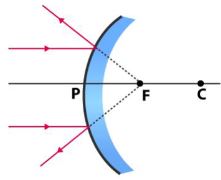 (b) At infinite distance from the mirror 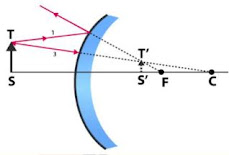 36. Size of image of an object by a mirror having a focal length of 20 cm is observed to be reduced to 1/3rd of its size. At what distance the object has been placed from the mirror? What is the nature of the image and the mirror?
Solution
m = 1/3
Using,

37. Define power of a lens. What is its unit? One student uses a lens of focal length 50 cm and another of – 50 cm. What is the nature of the lens and its power used by each of them?
Solution
P =1/𝑓, where f is in metre.
The unit of power is Dioptre. Lens is convex in the first case and concave in the second case.
Power of lens (first student) =+2 dioptre
Power of lens (second student) = -2 dioptre
38. A student focussed the image of a candle flame on a white screen using a convex lens. He noted down the position of the candle screen and the lens as under
Position of candle = 12.0 cm
Position of convex lens = 50.0 cm
Position of the screen = 88.0 cm
(i) What is the focal length of the convex lens?
(ii) Where will the image be formed if he shifts the candle towards the lens at a position of 31.0 cm?
(iii) What will be the nature of the image formed if he further shifts the candle towards the lens?
(iv) Draw a ray diagram to show the formation of the image in case (iii) as said above.
Solution
Position of the candle flame = 12.0cm
Position of the lens = 50.0 cm
Position of the screen = 88.0 cm
(i) u= 50-12= 38 cm.
Image distance v= 88-50= 38cm
Focal length = 1/𝑣 – 1/𝑢 = 1/𝑓
f= 19cm
(ii) Object distance u= 50 – 31= 19 cm
Here
Object distance = focal length
Hence the I mage is formed at infinity.
(iii) If he further shifts the candle towards the lens. The object comes between F and 0. In this case. Image is virtual, enlarged and erect and is formed on the same side of lens. 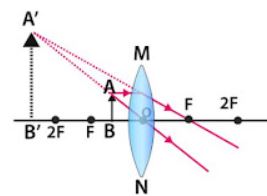