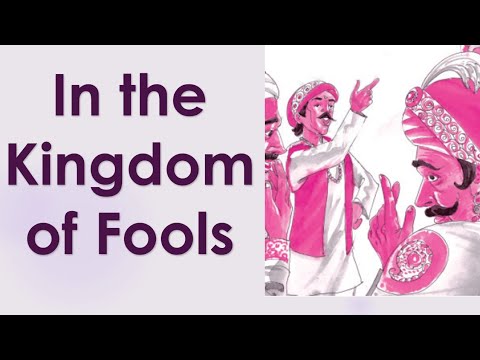 Question 1:Why were the people of the kingdom confused when they saw the dead bodies of the king and his minister ? (SA-1,2014)

Answer:The people of the kingdom were confused as to how their king and the minister were dead instead of the Guru and the disciple* The people were not able to see through the plan which was executed by the Guru against their king and minister.

Answer:The disciple did not pay any heed to the advice of his Guru, when the Guru asked him to leave the kingdom of fools. When the king decided that the disciple was the suitable person for execution, he remembered the words of the Guru.

Answer:Everything was different at the kingdom of fools. The night was considered as day and day as night. Not only the human beings even the animals stayed awake at night. Anything and everything could be bought for a Dudu.

Answer:The king had ordered the execution of the rich merchant. Since the rich merchant could not be executed the disciple was chosen to fit the stake. The disciple’s Guru had a vision and saw everything. In order to save his disciple, the Guru hatched a plan.

Question 5:On what conditions did the Guru and his disciple agree to rule that kingdom ?(Board Term Sept 1,2013, GKK73AP)

He laid the condition that he would be free to change all the old and foolish laws. Hence night was considered as night and day was regarded as a normal working day. Even persuaded prices were changed according to the value of the material.

Question 7:Why does the disciple not want to leave the Kingdom of the fools ?

The disciple did not wanted to leave the place because of the sale of cheap eatables and
other commodities and since everything was easily available and life seemed to be very
simple and easy.
Question 8:
Why did the king decide to postpone the execution of the Guru and his disciple ?
(Board Term 1,2012, ELI-015)

The Guru be-fooled the king. He told him that the people dying now would be the king and
minister in their next birth. The foolish king fell for the words of the Guru and postponed their
execution.

The strange thing about the Kingdom of fools was that not only humans but animals were
also made to sleep during the day. Everything in this kingdom used to come for a dudu.

The rich merchant was the real culprit. He had inherited everything from his criminal father.
He was too thin to be properly executed on the newly made stake. The worried king started
searching foolishly for a fat man to fit the stake and the merchant escaped the punishment.

What advice did the Guru give to the disciple before going out of the city ?
(Board Term 1,2012, ELI-019)
Answer:
The Guru told his disciple that it was dangerous to stay in a Kingdom of fools. He said that
there was no justice only foolish, unpredictable behaviour. According to him the kingdom would
not last long.

The Guru’s wisdom was that there was no justice in the Kingdom of fools and due to the
unpredictable behaviour of the fools, he wanted to leave the kingdom at once. The disciple
remembers these words when the king decided that the disciple was the suitable person for
execution was weak.

As the kingdom was without a king, the people of the kingdom persuaded the Guru and the
disciple to take over the throne. So, the holy man became the king and his disciple took the
charge of Prime Minister.

Two things that were different in the Kingdom of fools were that the people worked in the night
and slept during the day. Everything was sold at the same price. A ‘Dudu’ could buy a mass of
rice as well as a bunch of bananas.

Disciple in the story didn’t look into the depth of the matter and took a hasty decision of not
leaving the kingdom of fools. What light does the story throw on the importance of good
decision making one’s life? (SA-1,2014)

Disciple in the story didn’t look into the depth of the matter and took a hasty decision of not
leaving the kingdom of fools. Disciple was waylaid by the prices of the commodities. Anything
could be • bought with a ‘Dudu’. Either it could be a mass of rice or a bunch of bananas.
So, the disciple decided to stay back not listening to his Guru who advised his disciple that it
was dangerous to stay back in the kingdom of fools as there was no justice, prevalent in such
kingdom. It was when the disciple was chosen as the suitable person for execution that he
realized his mistake. He regretted his decision of staying back. Just one small decision costed
his life.

Do you believe in the fact that our prayers are often heard and answered ? There are miracles
which change the course of life. Which miracle took place in the story. ‘In the Kingdom of Fools?
What lesson do you learn from the Guru’s word of wisdom? (SA-1,2014)

It is often believed that our prayers are often heard and answered which was proved in the story.
‘In the Kingdom of Fools’. The king had ordered to execute the disciple. He prayed to Guru to
save him. It was a miracle that his Guru heard his prayer and came to rescue him. He
whispered something in his ears and then asked the king to execute him first and then the
disciple. The king released them both on knowing that whoever died first would be the king in
his next birth. It was his Guru’s advice and presence of mind that saved the disciple. The
disciple realized his mistake for Guru’s not listening to the Guru’s words of wisdom.

You are the disciple in the story, “Kingdom of the fools”. You are in trouble as you are about to
be hanged. You decide to write a letter to you Guru regretting your decision to stay in the
kingdom of fools and requesting him to help you. Write the letter in 80 words.
(Board Term 1,2012, ELI-016)

I am writing this letter out of sheer desperation. I regret not paying heed to your advice of
leaving this Kingdom of fools. I fell a prey to my temptation for cheap and tasty food and now
I am in serious trouble. I have been trapped and will shortly be hanged. Everyone here is
foolish and there is no point in reasoning with them. You are my only hope who can save me
from this situation. I request you to please come here at the earliest and save my life. I promise
in future I will always pay heed to your advice and keep myself in control.

How did the Guru and his disciple become the king and the minister of the kingdom?
(Board Term 1,2012, ELI-022)

The Guru knew that his king and his minister were fools. In order to save his disciple, Guru
hatched a plan. He said that the first one to be executed at the state, would become the king in
the next life and the second to be executed would be the king’s minister. The foolish king and
his minister got themselves executed. As the kingdom was without king, the guru and his
disciple were made the king and the minister.

The king ordered to execute the disciple. He prayed to his Guru to save him. The Guru heard
his prayer in his vision and appeared to rescue his disciple. First, he whispered something in
his disciple’s ears and then asked the king to execute him first. And the disciple followed suit,
which puzzled the king. Knowing the secret, the king fell into the trap of his temptation and
wanted to be the king in his rebirth. He went into the prison at night and set the guru and
disciple free. In their place, he and his minister disguised themselves as the guru and the
disciple and got executed. Thus, the Guru managed to save his disciple.

“The Kingdom of Fools” clearly reflects that “Guru was a wise man” as he advised his disciple
not to stay in that kingdom. As the disciple thought that the future is uncertain, he did not pay
any heed to his Guru and stayed on. When he was imprisoned by the King’s men, he realized
the significance of his Guru’s words and repented on his not following his Guru’s advice. So, it
is proved that Guru was really very wise. And it was because of his wisdom that disciple was
saved and they were made king and prime-minister of the kingdom.