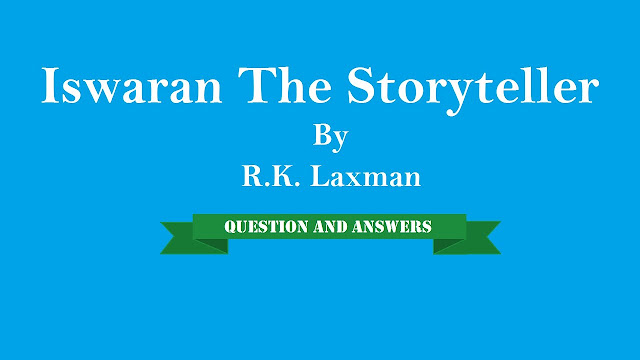 Question 1.In what way is Iswaran an asset to Mahendra?

Answer:Iswaran was an obedient person. He was Mahendra’s cook. He was very caring and hardworking. He did all the jobs such as cooking meals, washing clothes, and chatting with Mahendra at night. He obeyed his master with full dedication. So, he was an asset to Mahendra.

Question 2.How does Iswaran describe the uprooted tree on the highway? What effect does he want to create in his listeners?

Answer:Iswaran was greatly influenced by the Tamil authors. He was in the habit of creating suspense. He had the quality of narrating even the smallest incident in an impressive way. He presented the incident related to the uprooted tree on the highway in a dramatic way. He was alone and the road was deserted. He saw something that looked like an enormous beast lying across the road. But as soon as he came closer, he found there nothing but a fallen tree. His main purpose was to create suspense and surprise.

Question 3.How does he narrate the story of the tusker? Does it appear to be plausible?

Answer:Iswaran narrated the story of the tusker exaggeratedly. Having escaped from the timber yard, the Tusker, stamped on bushes, tore up wild creepers, and broke the branches at his will. The elephant became uncontrollable and entered the school ground. It created chaos there. Everyone in the school tried to escape. No one dared to face the tusker. In the meantime, Iswaran grabbed a cane from a teacher and moved towards the elephant. He hit its third toenail and the beast collapsed. He claimed that he had used Japanese art to control the tusker. But this story seems totally implausible as it is very difficult to believe that a child can control a mad elephant.

Question 4.Why does the author say that Iswaran seemed to more than makeup for the absence of a TV in Mahendra’s living quarters?

Answer:Iswaran was an expert in telling adventurous and mysterious stories in a dramatic way. It was his daily routine to entertain Mahendra at night. Mahendra could listen to and watch the development of the story. Thus Iswaran seemed to more than makeup for the absence of a TV.

Question 5.Mahendra calls ghosts or spirits a figment of the imagination. What happens to him on a full-moon night?

Answer:Mahendra calls ghosts or spirits a figment of the imagination as he did not believe in ghosts. One day Iswaran told him about a female ghost holding a foetus in her arms. On a full-moon night, he woke up from his sleep and looked outside the window. He got shocked to see the same figure and began to sweat profusely.

Question 6.Can you think of some other ending for the story?

Answer:The present story ends with Mahendra’s resolve to leave the haunted place. But it is not the appropriate ending. Mahendra should not have decided to leave the haunted place without knowing the reality. The story could end like this: Courageously Mahendra approached the woman and tried to know the reality. As soon as Mahendra caught the woman, it became the revelation of the mystery. It was none but Iswaran in the guise of a ghost of a woman.

Question 1.Is Iswaran a fascinating storyteller? Discuss with your friends the qualities of a good storyteller. Try to use these qualities and tell a story.

Answer:Undoubtedly, Iswaran is a fascinating storyteller. He is well-versed in storytelling. Telling stories is an art. It is not everybody’s cup of tea. He has the quality of making others realise the true spirit of the story. He makes use of gestures and dramatic skills to give sound effects.

A good story-teller should be an epitome of the qualities below mentioned:

You should try to tell your own stories in the class.